The Washington Redskins' home opener had record low numbers this weekend, and one player called out the fans.

On Sunday, the Washington Redskins hosted their season home opener at FedEx Field just like they've done every year since 1997, the year it debuted as Jack Kent Cook Stadium.

But despite the series of stadium upgrades that were made over the summer to make it a better experience for the fans (including a better menu, craft beers, and removing a section of seats to house a pavilion where patrons could eat, drink, and watch the game), FedEx Field was only able to fill 57,013 seats -- compared to the stadium capacity of 82,000 seats.

Removing seats is nothing new to FedEx Field -- over the past years they've actually removed seats to hide the attendance decline. But now it seems that the Redskins have finally decided to come clean about their attendance woes, as they announced this summer that the waiting list for season tickets has finally disappeared.

So What Do the Players Think of the Low Attendance?

Chris Thompson, the Redskins' running back, had a lot to say for the team this weekend. But did he actually call fans out as reported on our local sports radio station? 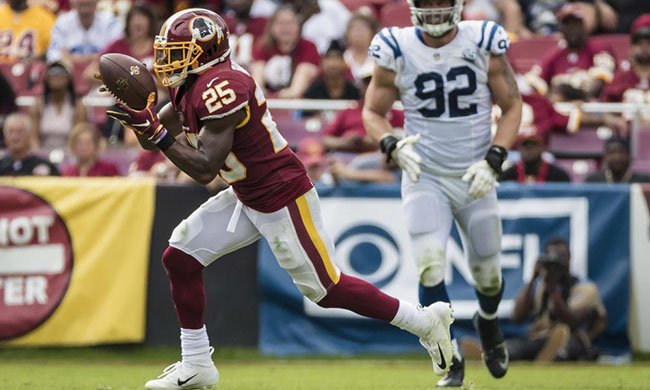 In an interview with the media on Monday, Thompson was asked by a reporter if the players noticed the low fan attendance. He merely responded by saying that the players like to see a big and loud crowd. They want a lot of noise so the opposing team can’t hear their calls, and that the low attendance was surprising.

He seemed more disappointed by the fan behavior.

"Me, I noticed it," he said. "I also noticed the boos we got as well, and that's not something that I'm a real big fan of. If you're a fan of a team, you shouldn't be booing them, whether we're doing good or bad. We understand as players that we're not performing how we should. You don't have to boo us to let us know – we're out there on the field.”

When asked if the players discussed the attendance or the booing, he responded, "I think every individual player just kind of looks around and notices it." You can hear the entire interview from 106.7 the Fan, here.

The general consensus was that the Redskin players appreciate fan support and like to see a crowded stadium to cheer them on (of course).

The truth is, attendance at FedEx Field has steadily declined since Jack Kent Cook’s team was sold to Dan Snyder. With overpriced premium seating and the Redskins' spotty playoff appearances since their 20-year run from the early '70s to '90s, each year brings fewer fans to the stadium. During the team’s heyday, the Redskins were the premier sports team in our area. Baseball hadn’t returned to D.C. yet, and the Capitals and Bullets (now Wizards) hadn’t had much postseason success.

However, in the past few years, besides the Redskins' struggles, other sports teams like the Washington Nationals have had a lot of success. Last year, the Capitals won the DMV’s first championship in 20 years. It’s not that fans aren’t interested in football any longer, but the 'Skins are having to share their fandom with three other sports franchises. And, with ticket prices rising, more people are opting to watch at home or at a sports bar with their friends.

Now, in all fairness, most of the Washington area was anticipating Hurricane Florence over the weekend, and that might have had a lot to do with the record low attendance at Sunday’s game. As Chris Thompson said, "We've got another one Sunday, so we'll see.”

The Redskins have a long history here in Washington, D.C. It would be a shame for something to happen to the franchise because of low ticket sales and attendance. I think that management needs to look at Sunday’s game seriously and figure something to get people back into the seats.

Was the attendance at Sunday’s Redskins game due to impending weather, or a sign of something else? Tell us your thoughts in the comments below.

Here are all the hurricane-related hoaxes we missed out on ...

If These Social Media Allegations Are True, the Redskins' New Team Name Is the Least of Their Concerns