The Washington Kastles have a new home for the 2019 season.

The Union Market in D.C. has a new attraction, and it’s not a new cuisine pop-up. The roof of the popular cooperative market is now home to a 700-seat tennis stadium, which will now be the home court of the Washington Kastles, D.C.’s franchise of World TeamTennis. The new venue promises to provide exciting tennis along with great views and an unparalleled cuisine experience. Matches in the new intimate venue are expected to sell out quickly.

The Washington Kastles have played at locations all over D.C. since the team’s inception in 2008. This year, team founder Mark Ein wanted to find a place that would showcase the city and its commitment to the community.

"The new Kastles Stadium will place fans in the center of the action, making them a part of the Union Market community while showcasing the beauty of the D.C. skyline, making it one of the most spectacular and iconic sporting venues the city has ever seen," said Ein. "Coming off our previous stadiums that often hosted sold-out crowds with capacities ranging from 2,200 to 3,500 seats, Kastles matches in our new 700-seat venue will undoubtedly be the hottest ticket of the 2019 summer.” 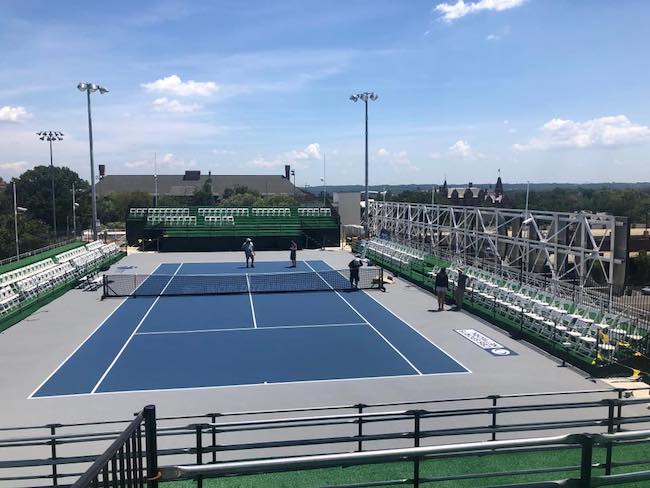 The new stadium will have a range of seating, including courtside boxes, baseline seats, and special VIP dinner tables complete with food from select Union Market restaurants. There will also be a reception area for sponsors and private player meet-and-greets.

The Washington Kastles tennis team is made up of superstars from around the world, including Bruno Soares, Yoshihito Nishioka, Marta Kostyuk, Lyudmyla Kichenok. Nick Kyrgios, Frances Tiafoe, Shelby Rogers, Kaitlyn Christian, and Venus Williams. The season began on July 15 against the Vegas Rollers.

Can’t make it down to the stadium? Check it out during match broadcasts on the CBS Sports Network.

Have you been to the new stadium? How were the views? Tell us in the comments!