The Capitals Are in a Pretty Good Place to Repeat. So, Can They?

The Capitals Are in a Pretty Good Place to Repeat. So, Can They?

On the first day of last year's training camp, Alex Ovechkin predicted (and promised) Capitals fans a victory. He came through.

The Washington Capitals' historic run for the Stanley Cup in June was monumental -- not just for them, but for the city as a whole: The Caps were the first Washington sports team to win a championship in 20 years, making the victory all the sweeter. And it wasn't an easy road -- it actually never is.

The Stanley Cup is difficult to win. You first need to make the playoffs, which isn’t easy to do year after year. Most teams don’t make the playoffs. Then you need to win more games than your opponent in each of the rounds. Lastly, if you’re lucky, you’re going up against the best or second-best team in the league in the Stanley Cup finals. It’s not easy the first time. It’s even harder the following year.

So what are their chances? Well, the Capitals have a lot of things going for them again this year.

We’re very lucky. Most sports teams lose a few players each year, but especially so after a championship. It’s rare to keep the exact team together as many players get offered big contracts after their championship year. But the Capitals have managed to do just that (for the most part). We lost forward Jay Beagle in the offseason, as well as back-up goalie Philipp Grubauer, who played the first two games of round one against the Columbus Bluejackets.

But, for the most part, we kept the team together. Alex Ovechkin is a Cap for at least two more years, and John Carlson (who became a free agent after the finals) re-signed with the Capitals for another eight years. Orpik was traded to the Colorado Avalanche along with Grubauer, but the Caps brought him back for a one-year deal. We still have Wilson, Oshie, Holtby, Backstrom, and Smith-Pelly -- and they’re ready to bring it on again.

We lost our leader Barry Trotts, who left to coach the Islanders, but assistant Todd Reirden, who’s been with the team since 2014, has taken the helm. Well-respected by the players and other coaches, Reirden not only helped the Capitals win a championship as the defenseman’s coach, but he also did it for the Pittsburgh Penguins in 2009. Blaine Forsythe returns for his 13th season in Washington as an assistant coach, and Scott Murray is goaltending coach for the second year. They also brought on Scott Arniel and Reid Cashman.

As far as Washington professional sports owners go, Ted Leonsis is a great guy who truly cares about the team and his employees. What other owner do you know who would surprise 200 of his employees with free tickets to the Stanley Cup finals in Las Vegas to cheer on their team? He chartered two airplanes for the lucky employees and put them up at the Excalibur for the night. 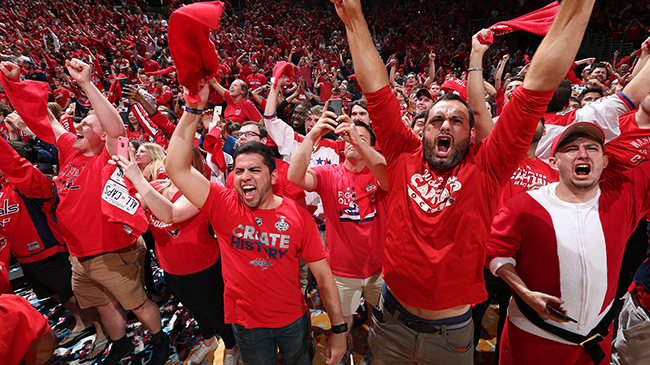 Every sports team appreciates their fans, but the Capitals have longstanding, loyal, and supportive fans who’ve stayed with them through victories and heartbreak alike. And this past year, the Caps gained a lot of new fans caught up in the playoff excitement as they kept defying past history and busted through to the finals.

For game five in Las Vegas, the Capitals held a viewing party inside the Capital One Arena and sold out of the free tickets within minutes. Fans not lucky enough to score indoor tickets swarmed to 9th and G streets to watch the game outside on the jumbotron while their team took them to victory in Las Vegas.  And, when the players returned home with the Stanley Cup, 100,000 fans gathered downtown for the homecoming parade.

Are We Ready to Repeat?

Opening day is Wednesday, October 3. Before the game, the Capitals will host their annual Rock the Red Carpet to meet and greet the fans as they’ve done for the past four years on F Street in front of Capital One Arena. But this year, the event will also precede the Stanley Cup banner-raising ceremony, which will be nationally televised as the Caps head into a brand-new season as the reigning Stanley Cup Champions.

The Caps are ready for the new season.  Are you?

Do you think the Capitals can do it again this year? Give us your thoughts in the comments below.

What are we going to do about the Redskins' attendance?