Here are all the details on how the rest of the season will play out.

It looks like professional basketball will be the first major sport to start back up after the coronavirus outbreak. After a 29-1 vote by the NBA owners (the one holdout being the Portland Trailblazers) and a unanimous vote by the NBAPA reps, it was decided that the league would play out an abbreviated regular season and a full slate of playoff games in Orlando, Florida. Per Shams Charania, a writer for The Athletic, 22 of the 30 teams will convene in Disney World on July 7, and the first games will be played July 31.

The 22 teams will be made up of the current 16 playoff-bound teams, along with six bubble teams: the New Orleans Pelicans, Portland Trail Blazers, Sacramento Kings, San Antonio Spurs, Phoenix Suns, and Washington Wizards. After an eight-game regular season, there will be a play-in game between the 8th and 9th seed if the lower seed is within four games of the 8th seed.  But from there, the NBA will have its traditional best-of-seven-game series to determine the 2019-2020 league champion. The NBA is targeting October 12 as the latest end-date for the season, with the lottery, the draft, and free agency to all happen in the following days.

According to Charania, the NBA has mapped out the next two months in preparation for the Disney playoffs.

The NBA is hoping that this plan, along with daily testing, will create a safe bubble for finishing out the season. A point of concern among the players was whether their families would be able to visit them in Orlando. The current plan allows players’ families to come to Disney as other teams are eliminated from the playoffs. Since the games will be played without fans in attendance, the NBA has considered having crowd noise piped in courtesy of the NBA 2K video game, but other options are on the table.

If everything goes as planned, July 31 will mark the first NBA game played in about five months. The last game was played on March 11, when it was revealed that two star players on the Utah Jazz—Rudy Gobert and Donovan Mitchell—had tested positive for COVID-19, bringing a fascinating season to a grinding halt. Since then, there have been very serious concerns that the 2019-2020 season would have to be canceled outright. But happily, it appears that Mickey Mouse will help crown a champion this year. 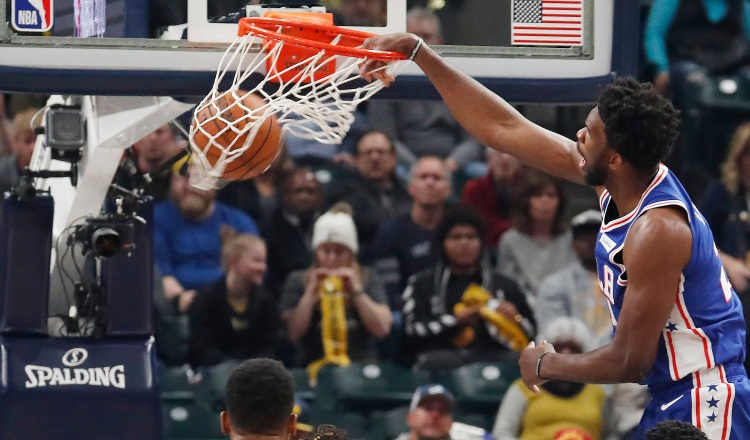 Joel Embiid of the Philadelphia 76ers, photo courtesy of nbc10philadelphia.com

A single hurdle remains, one that is totally out of the NBA’s control: the public’s acceptance of the legitimacy of the team that hoists the Larry O’Brien trophy in October. The winner of NBA Finals will not go through the crucible of travel and hostile away crowds that every champion has endured for decades. If the winner is a lower seed, like the Pelicans, there will be cries that New Orleans star Zion Williamson is a saint of circumstance who would have never won the ring in a normal playoff setting.  The same could very well be said if a team that isn’t favored nationally, like the Rockets, wins it all. The only way to avoid this outcome is if a lot of the match-ups go chalk; i.e., the higher-seeded teams beat the lower-seeded ones.

To be fair, complaints about the validity of the playoffs will be hurled by detractors even if one of the top seeds wins the Finals. If MVP Giannis Antetokounmpo and his number one seeded Milwaukee Bucks take home their first NBA Final hardware, haters will say that he had the easiest path ever to winning.  The same could (and will most certainly would) be said if Lebron James captures his fourth NBA championship.