A massive stage is being built over the famous Fountains of Bellagio.

It’s a big year for Las Vegas and the NFL. The Raiders are officially moving to Sin City, and the 2020 NFL Draft will take place in Las Vegas this April. But it wouldn’t be Vegas it the draft was carried out in a regular old ballroom. On January 21, the league and the city announced plans for a three-day event complete with interactive fan experiences, live musical performances, and the draft broadcast live from a stage suspended over the lake in front of the Bellagio. The event will take place over three days from April 23 to 25, 2020.

The elaborate lake stage will include a red carpet for a pre-draft show and a giant main stage with video walls on each side. Players will be transported to the stage via boat. In between draft selection shows, fans can see a lineup of live music performances and visit the NFL Fan Experience. The Las Vegas Strip will be closed to traffic for the free, three-day event. 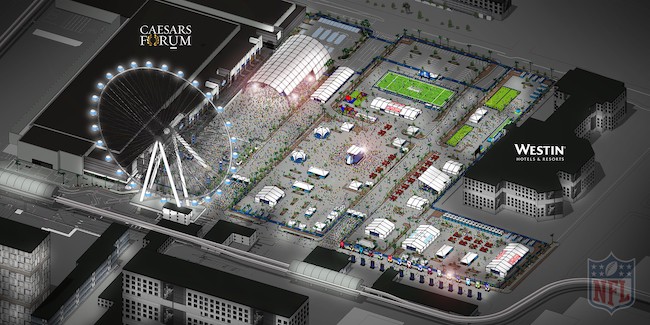 “Just as the NFL journey begins on Draft weekend for many young players, the Silver and Black’s journey in the Sports and Entertainment Capital of the World is also just beginning. There is no better place to showcase this special event than on the famous Las Vegas Boulevard, and fans will be treated to a truly unique experience in an iconic location,” said Raiders President Marc Badain.

The 85th NFL Draft in Las Vegas will also feature the NFL Fan Experience, a large carnival with interactive games, activities, and live entertainment. Fans can also get autographs from current and former players and win NFL swag. Over 400,000 people are expected to attend. The Las Vegas Raiders will start their inaugural season in the new Allegiant Stadium this fall.

San Antonio Spurs: 6 players to work out before the draft