There's Only a Week Left to Help Vote a Local Broncos Superfan Into the Ford Hall of Fans!

There's Only a Week Left to Help Vote a Local Broncos Superfan Into the Ford Hall of Fans!

You can vote for Garner through January 27!

Have you ever seen the superfan wearing firefighter gear complete with Broncos suspenders and Broncos fire helmet at a home game? Or perhaps you've seen the 1976 Ford fire engine, customized as Broncos Country Engine No. 7, parked and ready to tailgate at Mile High?

If so, then you've been in the presence of the incredible team spirit of Rob Garner, aka Rescue Rob, who hails from Fort Collins.

This 40-year-old Broncos mega-fan, and full-time firefighter for the Poudre Fire Authority, has been a season ticket holder since 2010. And while Rescue Rob is certainly known for his love of the Broncos, he is perhaps most respected for his community service.

This year, through his home-game tailgate parties with his fire engine, he raised over $10,000 to donate to various charities. According to his profile on FordHallofFans.com, he also drives the engine to fundraisers for other charity events, including those for Children's Hospital, the Denver Rescue Mission, and the Ronald McDonald House.

And it's because of his commitment to helping others and cheering on the boys in orange and blue that he is now one of six finalists for the Ford Hall of Fans honor. He was made aware of his nomination by a surprise visit from his favorite player, Hall of Fame cornerback Champ Bailey. You can see his reaction on his profile video at FordHallofFans.com. 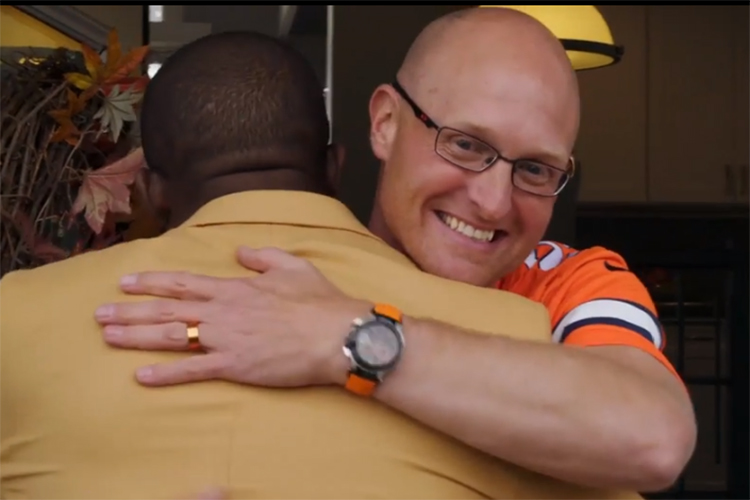 Rob got his nomination news from Champ Bailey himself! Courtesy FordHallofFans.com.

"Without fans, there would be no Hall of Fame. So we created the Ford Hall of Fans to honor the game’s most passionate supporters and enshrine them alongside the legendary players in the Pro Football Hall of Fame. No two fans are alike, but all of these fans share a passion for their team, their community and the game of pro football. Take a look at their bios and vote for the most Hall-worthy," says Ford.

You can vote for Rescue Rob here, but you only have until January 27! By voting, you also enter yourself for a chance to win a trip to Super Bowl LIV, 2020 Pro Football Hall of Fame Enshrinement, and a new 2020 Ford F-150! It's a win-win for you, and a chance to honor an amazing superfan who dedicates so much energy to helping others and cheering on our home team!

To Mask or Not to Mask: Today's Update From the CDC