Tony Hawk has put a lot into skateboarding.

Former pro skater Tony Hawk has teamed up with canned water company Liquid Death to create a limited-edition skate deck that used paint infused with Hawk's blood. Only 100 decks were made and they are currently selling for $500 apiece. Ten percent of the proceeds will go to charities like Hawk's own Skatepark Project—dedicated to "help underserved communities create safe and inclusive public skateparks for youth,"—and 5Gyres, a nonprofit focused on "empowering action against the global health crisis of plastic pollution."

In a video released Tuesday, Hawk can be seen getting his blood drawn which is later mixed with the red paint used on the deck. The graphics feature the water company's Thirst Executioner holding a bloody ax and a certain signature hawk skull.

Each board also comes with a copy of a certificate of authenticity signed by Tony Hawk himself.

Watch the video below:

Hawk recently became an ambassador for Liquid Death, which has always donated a portion of its profits to various NPOs committed to fighting plastic use and pollution as part of their mission.

In a statement to TMZ, Hawk expressed his pride in the project and that "organizations fighting plastic pollution and creating skate parks worldwide will be supported through our efforts." Liquid Death's website features an interesting variety of anti-plastic merch and now boasts a skateboard painted (in part) with blood. 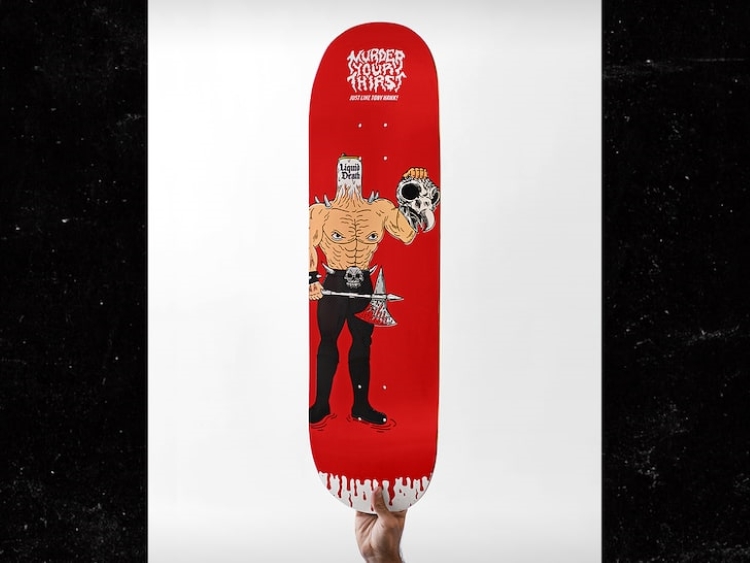 In fact, this is the second blood-related celebrity stunt in recent months. Earlier in the year, Lil Nas X and MSCHF released their "Satan Shoes," Nike Air Max 97s, each containing a drop of human blood, although not the artist's in that case.

now that tony hawk has released skateboards with his blood painted on them, and there was no public outrage, are y’all ready to admit y’all were never actually upset over the blood in the shoes? and maybe u were mad for some other reason?

Will you be buying a $500 skateboard? What do you think about the project? Let us know in the comments!