Tweet: Denver Shouldn't Be Allowed to Have Home Games?

Tweet: Denver Shouldn't Be Allowed to Have Home Games?

Brett "Spike" Eskin whines via Twitter and Denver fans aren't having it.

Boy, did Spike Eskin of WIP radio, Philadelphia, really step in it.

Prior to the Nugget's insane comeback against the 76ers in last Friday's game, Eskin decided to take to Twitter with what can only be characterized as a pre-emptive excuse for a 76ers loss. 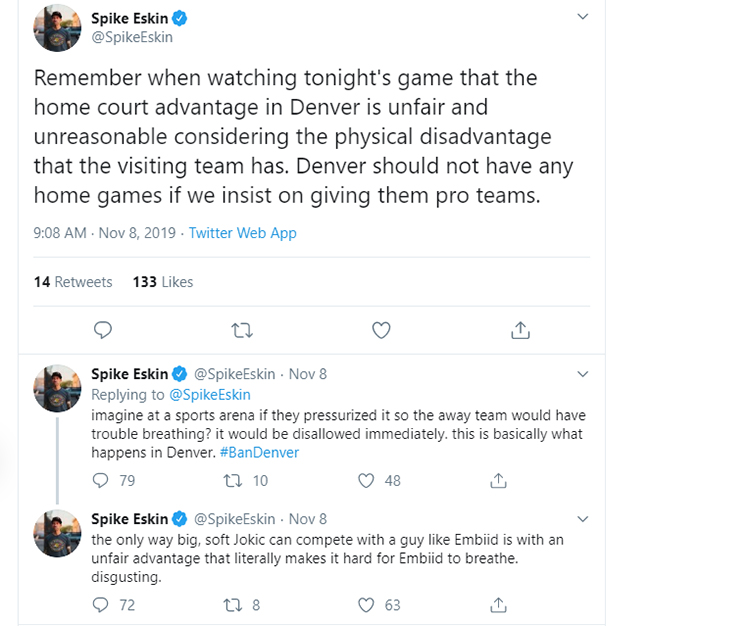 The #BanDenver hashtag was a particularly nice touch. Excuse me while I attempt to fix my eyes—they rolled so hard when I read this, I am sure Eskin heard it all the way over in Philly.

His argument, of course, is due to Denver's altitude. Which one of us hasn't had a giggle when we see opposing teams sucking wind or hooked up to an oxygen tank after a particularly active play? I know I have, and honestly, I feel for them a slight bit because we've all been there (even if you grew up here).

No doubt, training in Denver definitely helps our players acclimate to the thin air at mile high (if they've been here long enough—it doesn't happen overnight). But, seriously, our own players have to partake in the oxygen tank at times. That's part of the game, no matter the sport. Real athletes buck up and deal with it. And, I love Denver sports, but this year, a certain NFL team is Exhibit A of how altitude doesn't a champion make.

Should we not play in New England because of the freezing cold weather? Let's not play in Atlanta because it's way too hot and humid, and it's not fair to athletes who don't train in those conditions? I know, let's just designate one climate- and oxygen-controlled arena for all pro sports from here on out? Sheesh.

All Eskin's Twitter rant did, other than give us all a hearty belly laugh, was create a Twitter sh*tstorm of amazing responses.

Of course, he has now backtracked, calling it mostly a joke and saying he's surprised people took him seriously. He also decided to go for broke and call multi-Emmy-winning Altitude Sports Radio hosts a "Very sad, untalented group of broadcasters."

It's okay, Spike, buddy. Why don't you just go ahead and sit the next couple of plays out?

What do you think? Does altitude give anyone the home field (or court) advantage? Let us know your thoughts in the comments?