The World Champion Washington Nationals have revealed the design of the official World Series ring. The Washington Nationals won Game 7 against the Houston Astros to win their first-ever World Series on October 30, 2019. The rings were supposed to be given to players at a ring ceremony at the second game of the season, but that plan was shelved due to COVID-19. With players and fans anxiously awaiting the arrival of the rings, team management decided to hold a virtual ceremony to showcase the design and celebrate the big win. The event also served as a virtual fundraiser for local food banks.

The ring was designed and manufactured by the Jostens company and is made from 14-karat white and yellow gold and more than 23 carats of gemstones. The top of the ring has a large “W,” the Nationals' logo, made from rubies and surrounded by 58 diamonds. The left side of the ring features the Capitol building along with the individual player's name and number. The right side of the ring is decorated with the Nationals trophy and the words “Fight Finished.” “Baby Shark,” the unofficial anthem of Nationals player Gerardo Parra, was also included in the interior of the ring. 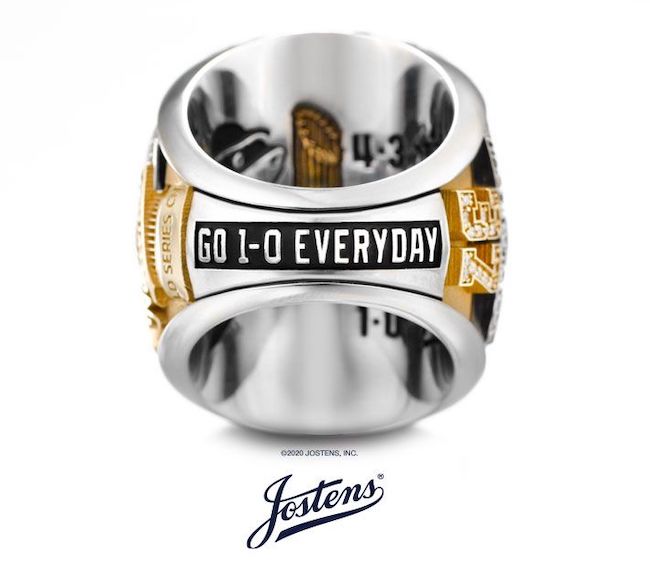 During the virtual presentation, fans were also encouraged to support the ongoing efforts by Capital Area Food Bank and World Central Kitchen during the COVID crisis. You can help feed the hungry in the D.C. area by donating to the NATS4GOOD Community Response Fund.

And, if you have an extra $15,000, you can get your own limited-edition replica ring by visiting jostens.com/nationals.

What do you think of the design? Does it embody the spirit of the Nationals? Will you be shelling out $15k? Tells us in the comments!