Crocs weren't always the coolest shoes to wear, and they were frequently used for comfort by many healthcare professionals. But, in recent months, Crocs has teamed up with several celebrities rebranding the shoe as something that everyone can enjoy wearing—even the super hip reggaeton artist, Bad Bunny!

Crocs released news of the new partnership last week in an Instagram post, showing Bad Bunny wearing his glow-in-the-dark shoes with Jibbitz charms, a couple of them featuring quotes from his songs, his iconic bunny logo, and several emojis. 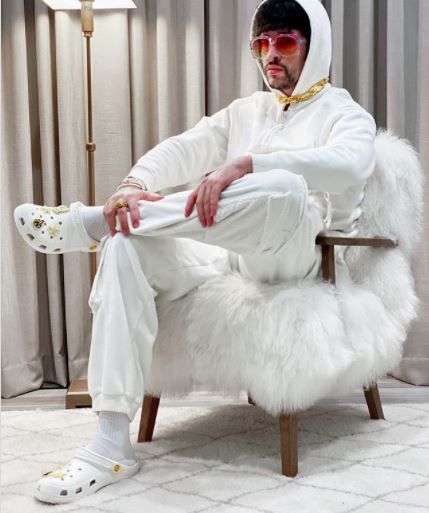 When Bad Bunny was asked about his choice to collborate with Crocs, he stated, “I believe in being honest and not limiting myself, which is also something that represents Crocs, and this is the message that I always want to be sure to send to my fans."

The new glow-in-the-dark shoes were released on Tuesday, September 29, on Crocs' website and Finish Line, but they were sold out within minutes! This caused the Bad Bunny's Crocs to trend on Twitter with many fans complaining about the limited quantity.

"To whoever got the bad bunny crocs, hope they don't even glow!" —@jlorenajt Twitter

"I hope everyone that got the bad bunny crocs has a horrible day." —@lesliezamoralun Twitter

Wow! Well, it seems like there are many unhappy fans out there, but we're hoping that Crocs might decide to release another batch of Bad Bunny's glow-in-the-dark Crocs in the near future. (Perhaps, just in time for Christmas!) Did you try to get a pair of Bad Bunny slippers (no pun intended)? Were you successful? Let us know in the comments below!