The lore surrounding the infamous Black Orlov Diamond is rife with speculation—and we're here for it.

If there's one thing we love here at OCN, it's a good story about cursed jewelry. We want to tell the tale of a stone that just sounds haunted. I mean, come on, the Eastern European name alone would give anyone an overwhelming sense of unease. So let's get started! 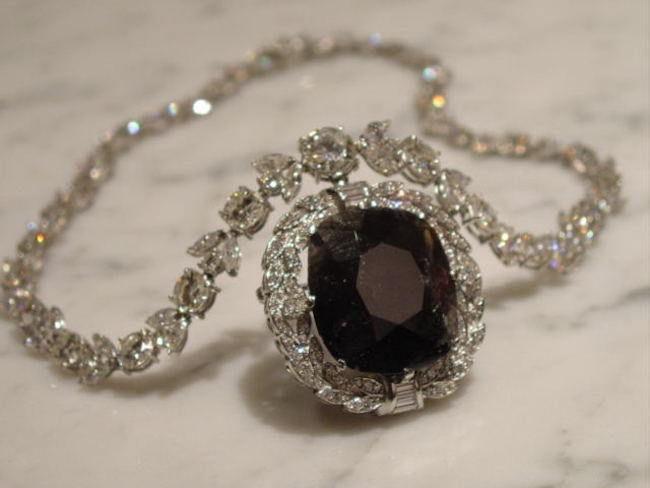 In early 19th century India, an eye-popping 195-carat black diamond rested beautifully in a statue of Brahma, a Hindu god. Well, that diamond was so attractive that a traveling Jesuit monk decided to steal it. From there, it was deemed that this sacrilegious act spawned the curse.

Fast forward to the turn of the century, where the diamond was allegedly in possession of Princesses Leonila Galitsine-Bariatinsky and Nadia Vygin-Orlov—the latter of which gave the stone its name. This is disputed as there is no record of a Princess Nadia Vygin-Orlov, but there is another Orlov diamond, the White Orlov. This diamond came into possession of the Russian Royal Family when Prince Grigory Grigoryevich Orlov gifted the diamond to his lover, Catherine the Great. Not only did he give her this 189.62-carat monstrosity, but he also initiated the coup which overthrew and killed Catherine's husband, Peter the III of Russia, making her Empress. Who said chivalry is dead?

Alright, back to the Black Orlov. Decades after relinquishing the diamond, Princess Nadia committed suicide by jumping to her death. In 1932, the diamond was purchased and brought to America by diamond dealer J.W. Paris. He later leaped to his death from a Manhattan skyscraper the same year he sold it to Charles F. Winson. Mr. Winson cut the 195-carat stone down to 67.5 carats and set it in a stunning beaded diamond necklace.

The diamond has been put on display in museums such as the American Museum of Natural History and the Natural History Museum in London. At present, the Black Orlov is owned by Pennsylvania diamond dealer, Dennis Petimezas, who believes that the curse has been broken.

Actress Felicity Huffman was supposed to wear the Black Orlov in a brooch at the 2006 Oscars but reconsidered. This slight may have been what contributed to her stroke of bad luck with her daughter's college admission but that may be a bit of a stretch.

Oh yeah, and if you get the urge to steal a jewel from a religious figure, don't.

Know of any other cursed jewels? Let us know in the comments!