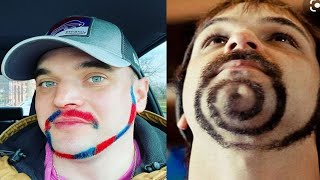 The men's facial hair phenom is taking some creative license on the monkey tail beard. Do you love it or hate it?

The facial hair trend "The Monkey Tail Beard Challenge" may be sweeping the nation once again, but for many (I'm guessing) this challenge will have us swiping left. The uncertainty of 2021 has already brought us arctic blasts, Kim and Kanye splitting to Olivia Wilde and Harry Styles dating, so why would we be surprised that the monkey curl beard has been revived?!

To be fair, this trend began in 2019 with the likes of professional baseball hottie Mike Fiers repping the unconventional facial "tail" that literally takes on the shape of a monkey's curled tail: trailing down the side of one sideburn, curling under the lower lip (and/or underneath the chin), and resting open-ended on the upper lip. But we're used to celebrities and athletes embracing avant-garde looks and styles (and somehow pulling them off). Meanwhile, the "average joe" is left with this false impression that women will actually like it, and even more so with the creative license they've taken by dyeing it (think Dr. Seuss) to excessive swirling (think cinnamon roll). Wrong.

OK, we get it. We've all had a lot of time on our hands alone in our homes. However, the world is slowly coming out of a worldwide pandemic where sweats, binge-watching, and boxes of wine have been the norm, and all the while the dating public have been mired in app "likes," video chats, and masked meet-ups as the dating protocols. According to statistics, online dating apps usage has seen 22% users much more and 31% users somewhat more as of April 2020. And for all the newbies out there, the veterans all know that a picture can make or break you; dictating whether or not you're on the couch or on the dance floor Friday night.

But good news, as COVID guidelines ease up, it's a brave new world of dating now with COVID vaccines, outdoor dining, and human touch (yay!). We can crawl out of our indented couch impression to find local singles where we can actually meet up in-person at cooking classes or at the local speak-easy for a well-deserved cocktail.

So you may want to think twice about posting that profile picture with the monkey tail beard. Because dating is hard enough already when you're looking for that elusive unicorn. And really, not for a monkey.

Take the poll to let us know which way you'd swipe for this beard. And if you're sporting this facial tail, we want to know in the comments why in the world you're keeping it?