Ready to Get Slimed? Your Favorite '90s Game Show Is Back -- And It's Coming Live to Baltimore

Ready to Get Slimed? Your Favorite '90s Game Show Is Back -- And It's Coming Live to Baltimore

If you grew up in the '90s, you remember slime. The infamous Nickelodeon show is making a comeback this year with Double Dare Live -- and it's coming to Baltimore.

If getting slimed was your childhood dream, you might finally get your chance.

A live reboot of the popular 1990s Nickelodeon show Double Dare is touring the nation as Double Dare Live, and they're making a stop in Maryland.

You can go see Nickelodeon's Double Dare Live and fulfill your lifelong aspiration of being drenched in a lime-green liquid of mysterious origin at UMBC Event Center on November 3, at 7 p.m..

The Double Dare Live tour schedule was announced the week of Aug. 20. The nationwide tour will hit 14 cities, including Charlotte, North Carolina; Newark, New Jersey; and Pittsburgh, Pennsylvania. More tour locations are expected to be announced.

Tickets are already on sale. If you want to be a contestant, participants can register October 1 on the show's website. 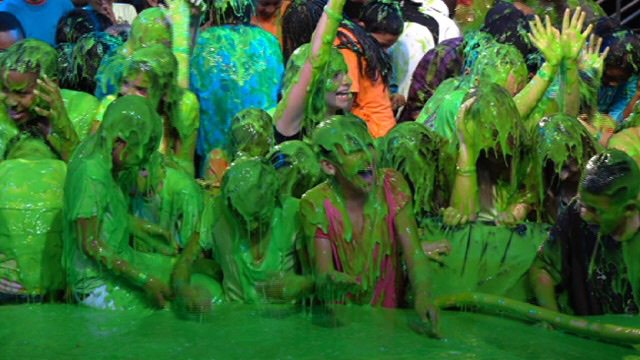 The hit show Double Dare, where contestants compete in challenges to avoid getting drenched in slime, originally aired on Nickelodeon from 1986 to 1993. The show more than tripled the network's viewership, making Double Dare the most popular and longest-running program in Nickelodeon's history. After the series ended in 1993, a TV reboot ran in 2000.

Despite the show's 1993 cancellation, slime quickly became a Nickelodeon hallmark. Numerous spin-offs emerged, and slime wasn't just a feature of Double Dare, it became a trademark of the network as a whole. Even if you're too young to remember the original Double Dare, you might remember Slime Time, The Splat, Figure It Out, Slimetime Live, or the Slime Cup -- all programs which carried on Nickelodeon's slime tradition.

Now the tradition lives on. This November, your favorite childhood game show is back, slime and all. Get your November 3 tickets to Double Dare Live at the UMBC Event Center here.

Do you remember slime?! You know watching kids get slimed on TV was the most iconic '90s thing ever. Get nostalgic with us in the comments on Facebook :)

The Girl Scouts have rolled out a caramel chocolate chip cookie. And now we can't wait for cookie season.