Rough air and high wind often accompany flights all over the state of Colorado due to what's known as mountain waves.

If you have ever flown in or out of Denver, it’s likely you experienced a bit of turbulence during take-off, landing, or both. Dozens of people a year are injured by turbulence nationwide and Colorado’s Rocky Mountains are among some of the worst places for turbulence in the country. It's actually not uncommon for flights to be diverted from Denver International Airport (DIA) because of the extreme and dangerous turbulence.

Turbulence, put simply, is a disturbance to the normal flow of air, which puts extra pressure on an aircraft’s wings. Airplanes are built to handle turbulence and can withstand some pretty rough conditions, though the experience is likely to rattle passengers.

Denver has had its share of emergency landings, scared passengers, and in some cases, damage to the aircrafts due to rough conditions above the Mile High City. Some notable occurrences in recent years include an incident in 2014 when five people were injured on a very rough flight from Denver to Billings, Montana. In 2015, a plane from Boston to Salt Lake made an emergency landing at DIA after its windshield shattered after flying through a hail storm. In February 2017, a plane was diverted to Denver on a flight for San Diego to Chicago after hitting extreme turbulence, and two passengers were taken to hospitals for medical treatment.

So, why is the air over Denver so unfriendly to travel?

We can blame the very same mountains that make Colorado so awesome. Mountain wave turbulence is the culprit—essentially it's high-speed winds passing over the mountains that create waves of violent powerful air, which can toss an airplane around like a toy. The United States Federal Aviation Association (FAA) describes the occurrence of mountain waves like this:

“When the wind speed is above about 25 knots and flowing perpendicular to the ridgelines, the airflow can form waves, much like water flowing over rocks in a stream bed. The waves form downwind from the ridgeline and will be composed of very strong up and downdrafts, plus dangerous rotor action under the crests of the waves. “

Mountain wave turbulence can be unpredictable, popping up in seemingly smooth air and causing sudden changes to flight conditions, just like rough waters will rock a boat on the ocean.

The diagram (below) from the National Weather Service gives a simple visual of the mountain waves and what happens to an airplane as it navigates through them. Pilots rely on pre-flight reports and the reports of other pilots to be aware of mountain waves on their route. The presence of these waves can, sometimes, be seen if there is enough moisture in the air to form lenticular clouds. 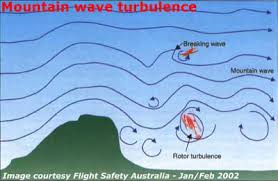 In addition to mountain waves, microbursts can occur, which have been known to cause serious injury to passengers and damage to the aircraft. Microbursts are localized columns of sinking air that cause a downdraft and can be wet, meaning they occur in the middle of an active thunderstorm or severe rain shower. Dry microbursts—which occurs without a storm—are also common in and near the Rocky Mountains.

It's not just over Denver where this kind of rough turbulence can be felt. Colorado has several little airports up in the mountains that can have extremely turbulent flying conditions. Aspen-Pitkin County Airport and Telluride Regional Airport are designated by the FAA as a "special qualification airports" due to the rough and dangerous landscapes.

What we have learned from all this is that dealing with the rough and often extreme turbulence and unpredictable flying conditions into and out of Colorado are just part of the deal. We can’t complain about the mountains, after all, Colorado wouldn't be fun without them.

Dealing with turbulence can be challenging as a passenger and cause fear and anxiety. There are ways to stay calm and collected in a turbulence situation; trusting the pilot, not panicking, wearing your seatbelt, and following the guidance of the flight attendants are on the top of the list.

Have you experienced extreme turbulence flying into or out of DIA? Do you have any ways to stay calm during a rough flight? Sound off in the comment below.