The chocolate museum has a two-story chocolate fountain and offers unlimited tastings.

If you love chocolate, there is a new attraction you must visit in Switzerland. Swiss choclatier Lindt Chocolate has opened the world’s largest chocolate museum in Kilchberg, a village just outside of Zurich, Switzerland. Lindt’s World of Chocolate gives chocolate-lovers the opportunity to learn about the origins and uses of chocolate, watch chocolate being made, and sample all of the rich chocolate they can eat. Visitors can also take a “chocolate course” and make their own chocolate treats to take home.

The centerpiece of the museum is the 30-foot chocolate fountain. Modeled after the golden whisk featured in Lindt television commercials, the fountain weighs three tons and can hold up 390 gallons of chocolate. A special network of plumbing pumps chocolate through the fountain at a rate of 2.2 pounds per second. Lindt’s fountain is just slightly taller than the 27-foot chocolate fountain inside the Bellagio in Las Vegas. That fountain features white and dark chocolate that pours down a structure of glass basins, 24 hours a day, seven days a week. 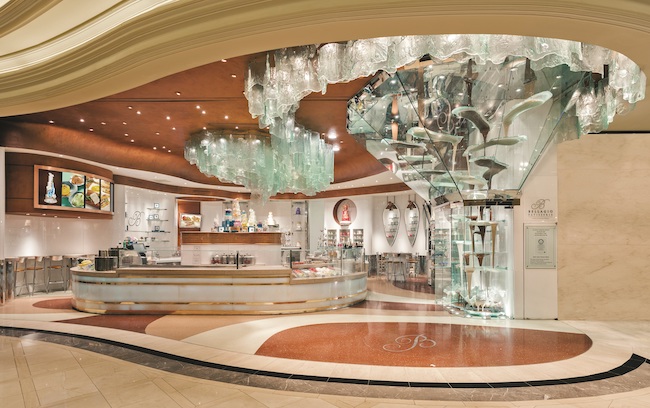 Inside the Lindt museum, visitors will learn about the history of chocolate, including why Switzerland is called the capital of chocolate. An educational tour through the factory shows how beans go from cocoa to liquor, to your chocolate treats. Next, visitors enter “Chocolate Heaven,” the tasting room where they can sample any and all of Lindt’s creations with no limits. For an extra fee, guests can visit the Chocolateria and make their own chocolate bars, truffles, and chocolate figurines.

Lindt made international news this past summer when its factory in Olten, Switzerland, malfunctioned, causing cocoa to fall like snow from the sky.

What are your thoughts? Is this a new bucket list destination for you? Tell us in the comments!