We've put together an epic lighthouse tour along the Jersey shore.

Between the Atlantic Ocean and Delaware Bay, New Jersey has quite a collection of lighthouses. Victorian architecture and the coastal landscape set the scene for discovering maritime history and engineering firsts—from Fresnel lenses and oil lamps to automation. So sit back in the La-Z-Boy or hop in an Audi Cabriolet, we’re going on a tour of the Garden State’s tallest, prettiest, and most historic lighthouses!

Sandy Hook is the oldest working lighthouse in the U.S. Built in 1764, it stands at 103 feet tall and features a charming white keeper’s house and tower with a red roof and cupola. Originally called New York Light, it served as a beacon for ships entering the southern end of New York Harbor. It’s part of the National Park Service and offers free tours. From the top, you can see Sandy Hook Bay, the Atlantic Ocean, and the New York City skyline.

For a unique lighthouse tour, you’ve got to check out Navesink Twin Lights. As the name implies, it has two towers, one at each end of a fortress-like stone structure. Overlooking Sandy Hook Bay, at the entrance to New York Harbor, one tower had a fixed light and one had a flashing light. This offered double duty to warn of the dangers of New York Harbor. It’s non-operational but is open for climbing.

Navesink was first lit in 1862 (there was a lighthouse here prior to that) and automated in 1949. On the National Register of Historic Places, some of its historic accomplishments include the first to use a Fresnel lens, radar-testing by the Army in 1935, first location of the reading of the Pledge of Allegiance in 1893, and Marconi and his telegraph in 1899. 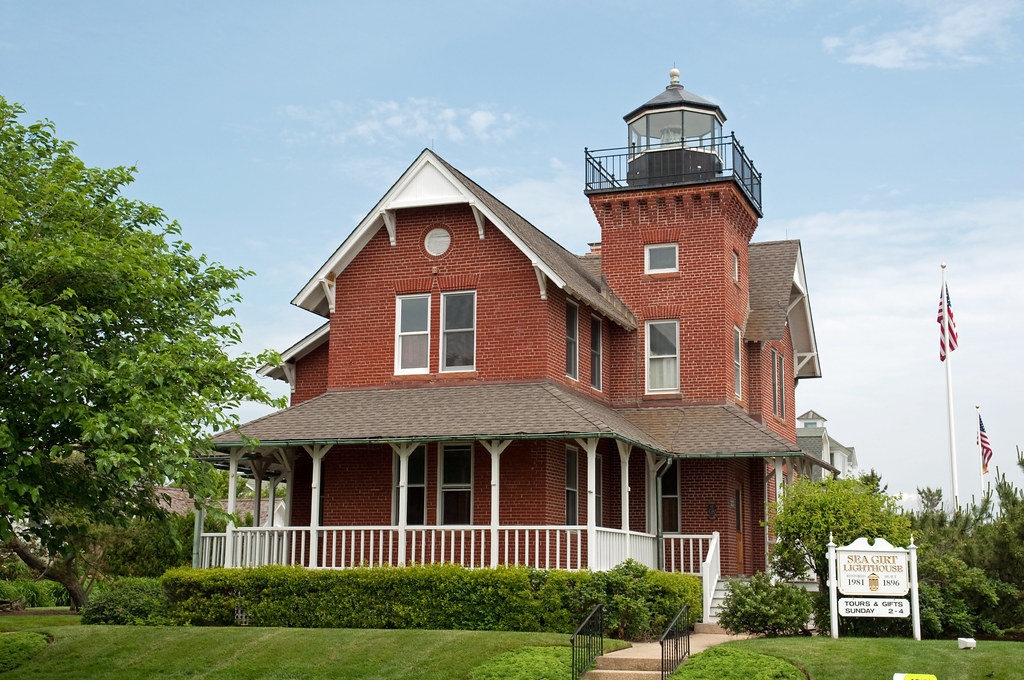 Sea Girt Lighthouse brings the charm of Victorian architecture to the Jersey shore. Built in 1896, the light could be seen for 15 miles. It was positioned between Barnegat Light and the Navesink Twin Lights, marking the inlet to Wreck Pond, to help aid navigation of the 40 treacherous miles between the two lights. Decommissioned in 1945, the interior is restored and historically accurate. Admission is free, and there are exhibits and guided tours up to the 44-foot tower.

Barnegat Lighthouse was an important navigational spot for vessels headed to New York Harbor. The brick structure is easy to recognize with its half/half color scheme of white at the bottom and red at the top. It was constructed in 1835, first lit in 1857, and automated in 1927. If it looks familiar, you’ve probably seen it on New Jersey’s “Shore to Please” conservation license plates.

Locally known as “Old Barney,” it’s located in Barnegat Lighthouse State Park. At 169 feet tall, there’s a flashing white light that still operates today. From the top, you’ll have views of Barnegat Bay, the Atlantic, and Island Beach State Park. There’s a museum a couple of blocks away.

Absecon Lighthouse features a distinctive white tower with a black band. It’s the only one in New Jersey with its original first-order Fresnel lens still in place. The light still shines, but it’s not used as an active navigational beacon. It has a fixed white light (rather than a flashing light). 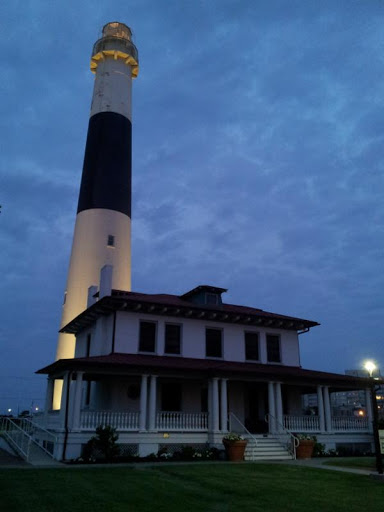 Absecon is the tallest lighthouse in New Jersey, as well as one of the oldest. Opened in 1857, it’s 171 feet tall and open for climbing. Views of the Atlantic City skyline await at the top of 228 steps. It’s on the National Register of Historic Places, the Historic American Buildings Survey, and the New Jersey Register of Historic Places. Along with a gift shop, there’s a museum with a re-created keeper’s quarters and a Fresnel lens exhibit.

Located on Five Mile Beach, near the entrance to the Atlantic and the Intracoastal Waterway (ICW), Hereford Inlet Lighthouse was built in 1874 and features a wooden Cape Cod-style cottage with a tower attached. The tower is about 49.5 feet tall.

Hereford Inlet Light is maintained by the U.S. Coast Guard as a working navigational light and is open for guided and self-guided tours. The light is visible for 13 nautical miles during clear weather. There’s a museum, a butterfly garden, a park with Victorian-style gardens, and a gift shop to remember your visit.

Cape May Lighthouse, courtesy of capemaymac.org

Cape May Lighthouse opened in 1859 and is open for climbing if you’re interested in trekking up 199 steps to the top. You can see views of Cape May City and Wildwood as well as Cape Henlopen, Delaware if it’s clear. It’s nearly 158 feet tall with a cast-iron spiral staircase and two separate walls, which were designed to withstand hurricane-force wind gusts.

On the National Register of Historic Places, it’s a traditional tower light (rather than a residential-style house like some of the others mentioned). The tower is white brick with a red cupola at the top. Cape May was automated in 1946 and is fully working today. The light flashes every 15 seconds to warn vessels approaching at Cape May Point. There’s a museum with a gift shop on the property.

Located in Delaware Bay, East Point Light was originally known as Maurice River Light prior to 1913. The Cape Cod-style stone and brick structure is white with a bright red roof. Opened in 1849, it’s the second-oldest lighthouse in New Jersey and was recently restored inside and out. It actually resembles a residential home more than a traditional lighthouse and the tower is 40 feet tall. It’s an active lighthouse and is open for tours.

Have you been to any of New Jersey’s lighthouses? Which one is your favorite? Let us know in the comments.