The end of a celestial era ...

The sixth and final season of Lucifer aired on Netflix on September 10. In case you're tuning in for the first time, the show is something of a supernatural and cop show mash-up, with the occasional musical interlude. Lucifer Morningstar, the devil himself, lives in Los Angeles, where he owns and operates the nightclub Lux. Early on in the show, he became entangled in a murder investigation, where he met and fell for lovely detective Chloe Decker, and has been consulting on LAPD homicide cases ever since while simultaneously solving celestial problems.

Last season, Lucifer started out in Hell, where he had returned to his throne to prevent the collapse of the world. In the meantime, his evil twin brother, archangel Michael, came to earth to wreak some havoc. Things got so bad that finally, God himself had to intervene. After attempting some quality family time with his sons, God eventually announced that he was retiring from his job, which left an opening for a new supreme being. Michael and Lucifer fought an angel battle to fill the power vacuum, which Lucifer ultimately won.

In this season, Lucifer is still struggling to feel worthy of filling his father's shoes, so he's dawdling in Los Angeles with Chloe, looking for a sign that will point him in the right direction. Maze is headed into nuptial bliss with Eve, while Dan, now a soul in Hell, is coping with unexplored feelings of guilt. Ella is finally putting the pieces together about her friends' true identities (a little too conveniently, if you ask me). And of course, another mystery celestial being shows up: Lucifer's daughter from the future. There's a lot to love in this season, although I'm not convinced that the writing delivered where it really counted.

Read on to find out more about the best and worst of Lucifer Season 6.

Balance between action and character development

Last season, I had an issue with how overly complicated every episode was, and how many transactions were happening at the same time. While the characters were running around searching for celestial artifacts, we didn't get to enjoy the warmth of their relationships as much. Character conflicts didn't feel authentic, and in particular, we didn't get to really feel the chemistry between Lucifer and Chloe. Something was always wrong, and there was entirely too much back-stabbing going on.

For the most part, this season corrected many of those problems. There was still plenty of intrigue, but the characters' plot lines felt more elegant and fluid. Chloe and Lucifer start to flow more as partners, and as a plus, Dan is still not gone from the series, so he continues to contribute humanity and sympathy to the show as a guy who's just trying his best. The introduction of Lucifer's daughter is also a quality twist, and Maze and Eve even have a side story that feels organic. We even get a "cheeky" (literally) reference back to last season, when the view of Tom Ellis's derriere broke the internet. Love it.

This season took a close look at pertinent social issues, specifically police brutality and systemic racism. Amenadiel is shadowing a fellow officer as he begins life as a beat cop and is thus thrown into conflict with an officer who has a documented history of acting with prejudice against people of color, but has nonetheless been promoted within the LAPD. The situation causes Chloe, Amenadiel, and Amenadiel's mentor alike to explore their motivation for serving their community as law enforcement officers and to question the best method for fighting injustice. 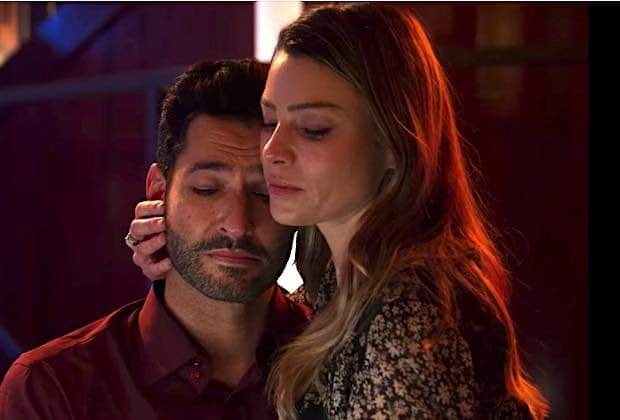 But that last episode ...

I liked basically everything until the last episode, and then the writing returned too heavily to this transactional thing where characters make huge decisions for reasons that don't make much sense. One of the biggest ongoing plot devices in the season is a piece of news that Lucifer's future daughter, Rory, delivers when she arrives in the past. According to her, Lucifer leaves Chloe high and dry while Chloe is pregnant with Rory, sparking Rory's lifelong resentment and rage towards Lucifer. Lucifer does not believe that he would ever subject his family to such neglect, and the whole season ultimately drives toward the moment when he allegedly disappears.

When the moment finally arrives, Lucifer's little family finds that Rory is inadvertently the cause of Lucifer's disappearance. After a dramatic kidnap-and-rescue situation, Lucifer has an epiphany that his true calling is not to become the supreme being of the universe, but to help others find redemption the same way that he has. Overcome with emotion, Rory has a change of heart and makes Lucifer promise to abandon his family after all so he can engage in this work, and he essentially becomes a therapist to the souls in Hell.

While it is satisfying to witness Lucifer's final self-actualization, I am still utterly baffled as to why it is necessary for Lucifer to suffer total separation from his family. Certainly, his work is important, but how could it be so demanding that he can never see his family ever again? Or, if he endures this isolation simply because he gave his daughter his word that he would, then that also sucks. Plus, Amenadiel actually does become God in Lucifer's place, and he later appears anywhere he chooses, visiting his loved ones as often as he pleases. If he has time to do all that, then why wouldn't Lucifer?

After the season finale, I came away feeling especially sorry for Chloe. She is left to clean up celestial messes again and again, from handling Lucifer's selfish moments with grace to single parenthood. It's encouraging that she and Lucifer can finally be together in the eternal, but the lead-up really makes you question why she would even want that. She gets burned for tangling with celestial beings time and again, and this story smacks a little too much of the stories of Greek or Roman gods who leave mortals behind with their demi-god offspring.

This was generally a solid end to a great show, and it improved on many of the irksome aspects of past seasons. However, in possibly the biggest moment of the entire show, the writing still proved awkward when it came to character motivation and decision-making. I give this season an A-. Reflecting on Lucifer in its entirety, I recommend it as a series. For a show that is often silly and humorous, Lucifer has been a strong voice promoting emotional development, friendship, social consciousness, and self-awareness.

Do you think Lucifer Season 6 was a fitting end to the series? Let us know in the comments!