Think you know who's under the mask? Spoilers for The Masked Singer ahead!

Episode 6 of The Masked Singer brought the remaining Group C competitors back to center stage. However, the singers weren't the only ones returning. At the beginning of the show, a mysterious masked singer called Mr. TV performed Maroon 5's Memories and revealed himself as Season 2's winner, Wayne Brady. He then took his seat as the episode's guest judge and found out what it was like to be on the other side of the panel.

At the end of the show, the audience sent Squiggly Monster squiggling back to his cave, and the judges revealed a full house as the monster under the mask turned out to be actor Bob Saget.

"I wanted to keep going,” Saget told Variety. "I deserved it. But my voice cracked a bit and, look, the audience voted. And I'm one of those people that accepts the result when people say 'you know, you're not coming back.'"

Saget revealed that although his costume was difficult to manage, it was probably one of the safest costumes.

"The Squiggly head is like 30 to 40 pounds of COVID safety," the actor said. "Nothing’s coming in or going out, including air. So, that was the hardest part. I literally couldn't see, and then they would hold my hand—but they couldn't find my hand because I had lobster claws for the upper hands and the lower ones were filament. It was kind of a crab, colorful with all creatures represented on the planet."

Although Squiggly Monster had to "cut it out," his departure left three Group C competitors safe for another week. Let’s take a look at the clues they gave to see if you can spot who’s hiding under the mask. 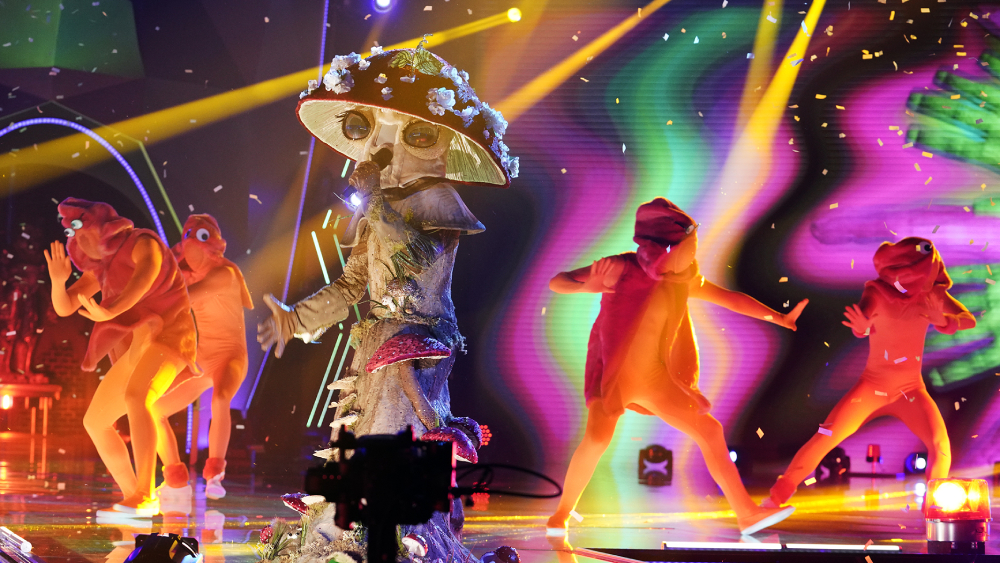 Song: “If I Could Turn Back Time” by Cher

Clues: Mushroom said they get a bad rap because a lot of people don't like the taste of the fungi. However, he's there to win the world over. Even as a young shroom, he knew he was offbeat. He often felt like he didn't belong anywhere and had totally different roots from the other fungi. He was around strange food and customs, but then he realized that under the surface, we're all entangled together as one and anyone could be a prom queen. Once he embraced being a nerd and an outcast, he could proudly share his unique gifts. His weirdness has led him to where he is and it's now time to "fetch" the golden mask.

Throughout Mushroom's clue package, fans could catch a glimpse at the following potential clues: a sign that said "North Spore High School," a lot of Mean Girls references, orange juice, Kangaroo from a previous season, eggs, two black beetles, a Santa decked out in leopard print, and bedazzled sunglasses

After the Mushroom's performance, he also brought out a red Jell-o brain and said "A mind is a terrible thing to waste, but it makes for a pretty sweet clue.”

My Guess: Billy Porter. Well, first off, mushroom could be a play on Porter's name ... Porter-bella mushrooms. Earlier, Nick Cannon revealed that one of this season's contestants was on Time's 100 most influential peoples list and Porter made the list in 2020. In this episode, the mushroom's clue package referenced a lot of Mean Girls quotes and a theme of loneliness and not fitting in. Porter's profile for Time's Influential People list mentioned him "growing up as an outcast" and not fitting in. He also was in Kinky Boots, which also has similar themes about being misunderstood.

Last week's clue package made a lot of references to Hamilton, and in 2017 Porter released Billy Porter Presents the Soul of Richard Rodger which featured many Hamilton stars. There was also a hint to Star Search in the last clue package, and Porter competed on the show and won the title of best male vocalist in 1992. 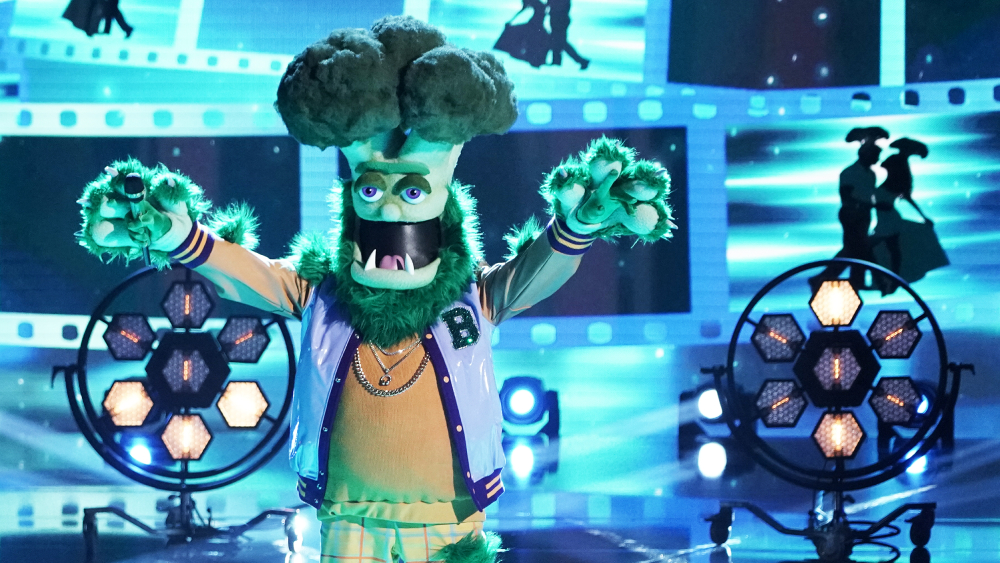 Clues: Broccoli loves rocking his costume and feels like he's a success story for The Masked Singer diet plan. However, it's been no sweat. He dreamed of being a superfood that enriches people's lives, and one night he got the opportunity. He had dinner with a legendary friend, the big cheese, who needed help with one final project before he became moldy. He raced home, pulled an all-nighter, and created a beauty that "packed a punch." Broccoli called the boss and made something special. However, he couldn't imagine the classic he created all from one meal.

Throughout Broccoli's clue package, fans could catch a glimpse at the following potential clues: Goodfellas, a taxi cabbage, a building with a sign that read "Copabanana," the number "900,", a red backpack, guitar, wine, a Hawaiian pizza, the number "3-7-2-6-5," an anchor, and carrots.

After his performance, Broccoli brought out a roulette wheel and stated, "Take this clue for a spin and you may land on my identity—if you’re lucky."

My Guess: Paul Anka. The story that Broccoli tells in his clue package is exactly how Anka wrote "My Way" for Frank Sinatra. Anka had dinner with Sinatra, who said he was quitting the business. Anka spent all night writing the song and finished it at 5 in the morning. He called Sinatra and said, "I've got something really special for you." "My Way" was also in the movie Goodfellas. 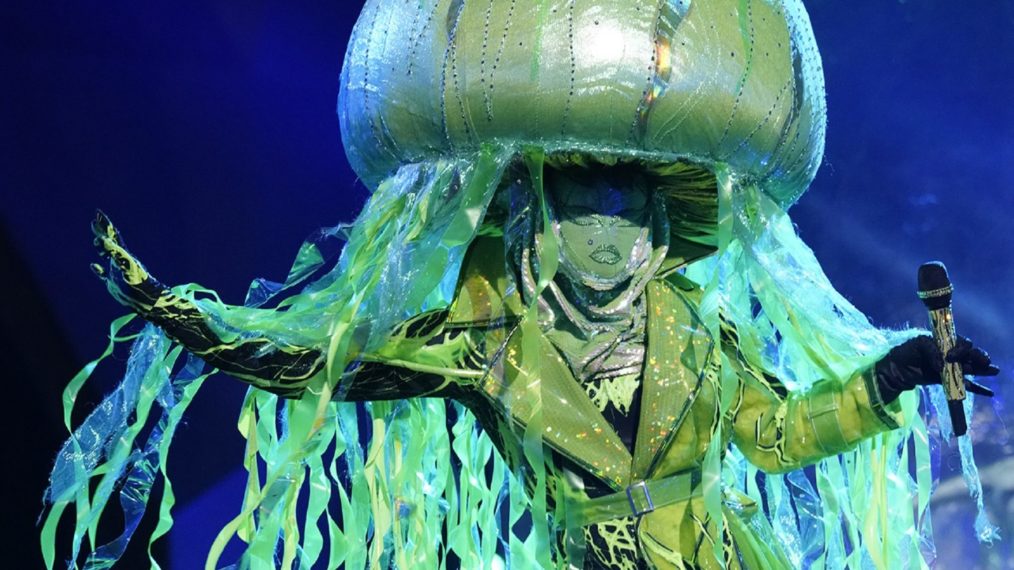 Clues: The Jellyfish is super-competitive but her nerves got the best of her last time. She's usually the best at what she does, but she's on The Masked Singer without the people that pick her up when she falls. Her parents are the "sea's knees" and sacrifice their time and careers for her success. Papa Jelly is her "ride or die" and he helped engineer her whole world, teaching her the best life hacks. They would wake up at 3 a.m. and go to gigs in "far away lands."

Throughout Jellyfish's clue package, fans could catch a glimpse at the following potential clues: a film projector, a ship called "USS Big Bird," a candle, yoga mats, a clock with the time 7:20, a triangle, a purple lightsaber, and cereal.

After her performance, Jellyfish brought out a stuffed tiger and said "If you can earn your stripes and pounce on this clue, rrrrr!"

My Guess: Chloe Kim. The snowboarder was once on the front of a Corn Flakes cereal box and had an appearance on Sesame Street interviewing Big Bird. The clock flashing the number 7:20 could be a reference to a 720 snowboarding maneuver, and the yoga mats could reference Kim's dad's idea to pad her snowboard with yoga mats when she first started learning. In last week's clue package there was also an Angelfish which points to Kim's cameo in the new 2019 Charlie's Angels film.