The Masked Singer returned to its Group A singers in preparation for the show's final episodes. Throughout the night, audiences heard sultry singing from Sun, Snow Owls, and Popcorn as they attempted to impress the judges and guest panelist Niecy Nash. However, all good things must come to an end. The Snow Owls and Popcorn had the least number of votes after their performances and were sent to the ring for a head-to-head sing-off.

Popcorn prevailed, ruffling the Snow Owls' feathers and leaving them buried in her buttery dust. When the duo took off their masks, it was no surprise 'hoo the lovebirds were. The singers revealed themselves as Clint and Lisa Hartman Black—exactly who we and Jenny McCarthy Wahlberg predicted.

“It took about three minutes to decide to do it,” Black told Variety. “And then it was, ‘Oh my God what have we done?’ It starts to look like more than you can chew. We really didn’t have an idea just how challenging it would be. But it was fun. We’re glad we did it.”

The hardest part of becoming the Snow Owls was figuring out how to operate the costume. “It’s like hot yoga without the yoga,” Black said. “On the first day on the set to see this egg and get inside the egg and see if we can operate it,” she said. “We had handbrakes and bars and I mean it was pretty intimidating… We tried to take little bitty steps and it had a mind of its own inside that egg. It didn’t want to go where we wanted it to go. I held Clint’s hand a lot, we kind of leaned on each other.”

The Snow Owls went home to their flock, but that allowed Sun and Popcorn to move on to the Super Six. Let’s take a look at the clues they gave to see if you can spot who’s hiding under the mask. 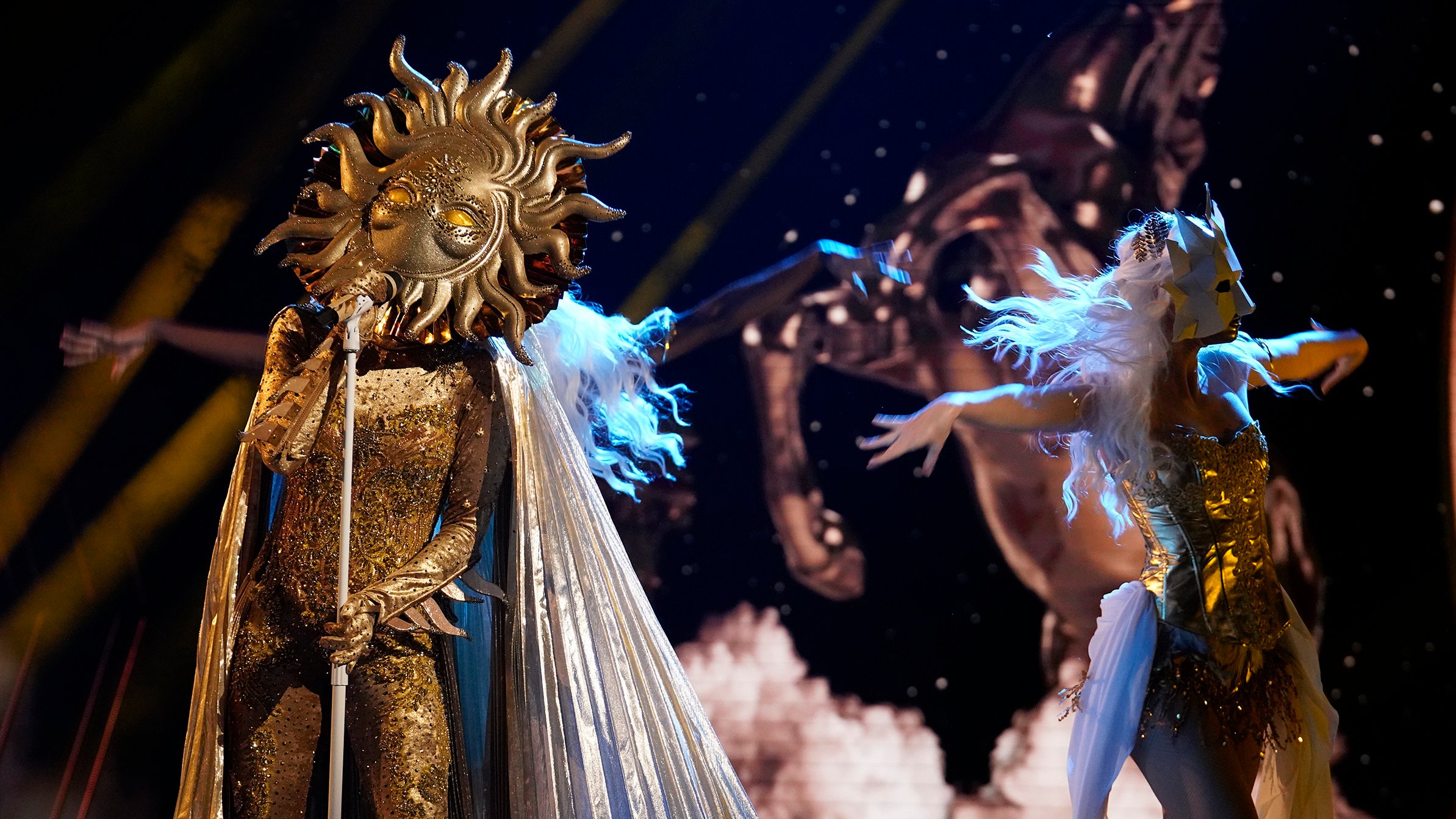 Song: “Piece of My Heart,” by Janis Joplin

Clues: The Sun never thought that returning to the stage after all these months would feel like it does, but performing again feels radiant. She told fans to look at her carrying on, and "honey, take the wheel." Like so many people, the last few months were isolating for Sun and her mystery guest. However, they took their RV out on road trips and realized they don't need much to be happy. The mystery guest knows Sun misses entertaining people and she's never taken this long of a break. Her mystery guest told her he's happy to see her in the limelight again and to "keep on shining tonight."

Throughout Popcorn's mystery guest's shoutout, the following clues can be spotted: a picture of the Northern Lights, wind chimes, an RV, a black car with flames on the side, a snapshot of Baltimore, a postcard from Alaska and Mexico, four cows, and a sandcastle.

The Sun also brought her friend to virtually deliver a clue after her performance. Her friend said, “The Sun is actually golden. She has at least one single that was certified gold.”

My Guess: Leann Rimes. Rimes and her husband Eddie Cibrian met on their made-for-TV movie Northern Lights, which could explain the Northern Lights photo found in Sun's clue package. Cibrian played a cop from Baltimore who moved to Alaska, which could also explain the mentions of Baltimore and Alaska. Sun's mystery guest revealed that Sun has at least one single that was certified gold. Rimes has two albums that were certified "Gold" by the Recording Industry Association of America. 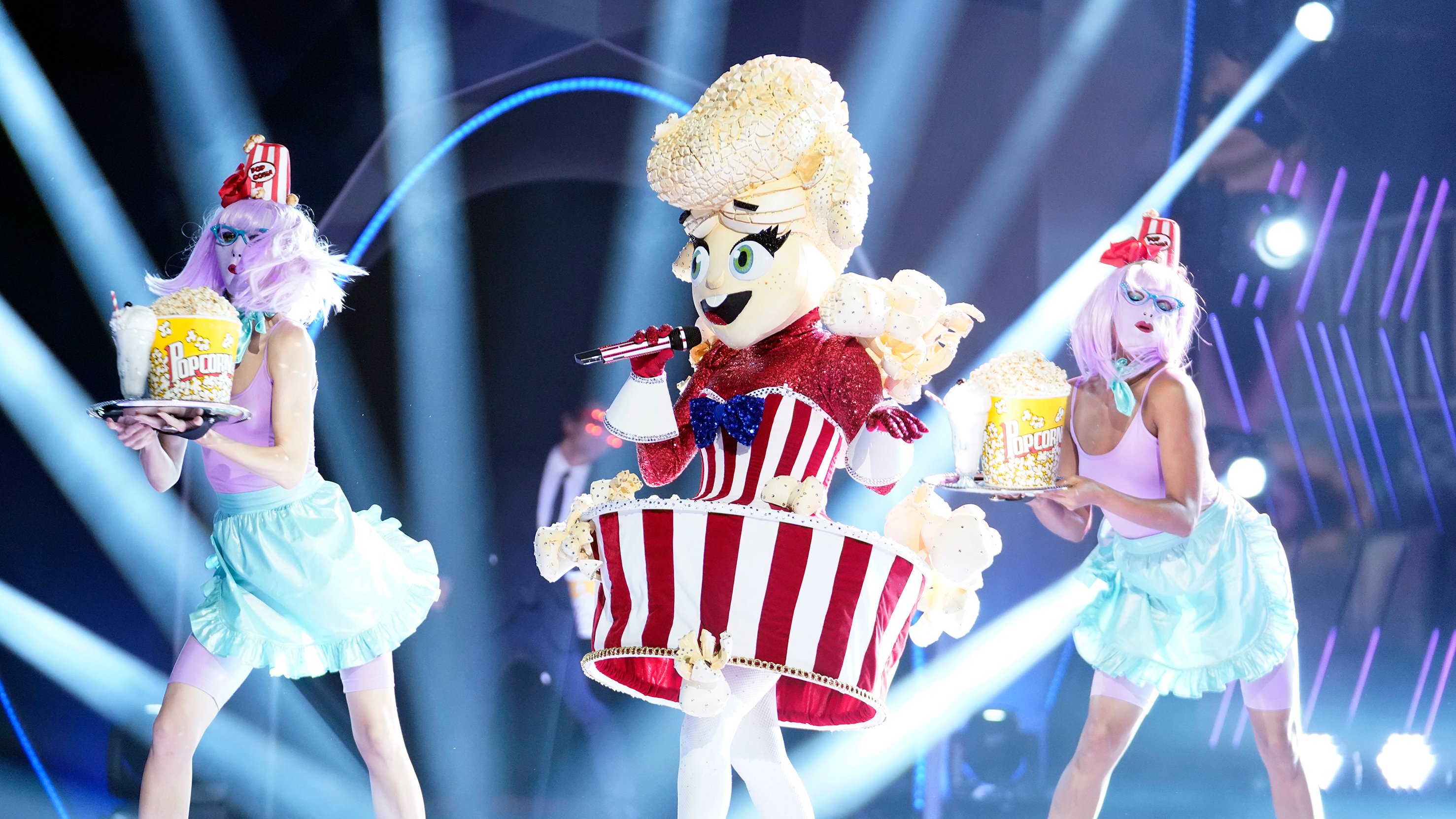 Clues: Popcorn brought her "Queen Bee-FF" to say some words about who's under the mask. The mystery guest knows Popcorn through a mutual friend, technically a "Queen associate." She doesn't have to tell the judges that Popcorn has an amazing voice. However, she can never get Sun to perform at her famous karaoke parties. She says it's "such a royal pain." Popcorn's friend revealed that she has sung on the Masked Singer stage before and she told Popcorn good luck making it to the Super Six because she deserves the crown.

Throughout Popcorn's friend's message, the following clues could be spotted: bunny ears, a deer, golden scissors, a sewing set, and white flowers.

Popcorn's friend also said the following about the buttery singer: "To my friends up there, not only have I been here before, but in the show’s history, one of you have guessed Popcorn.”

My Guess: Tina Turner. There weren't many clues in Popcorn's package this week, so I'm sticking with my guess from before. Turner's Chinese Zodiac sign is a bunny, which might represent the bunny ears clue. She's also known for her fashion sense and has worked with many fashion designers, which could be the reason for the sewing set in Popcorn's clue package. The judges have also guessed Turner before in previous seasons.

In previous clue packages, Popcorn had a reference to Venus, which could represent a dress inspired by Tina Turner that Venus Williams wore for a Glamour cover shoot. There was also a crimper and a Rubix cube in previous episodes, which are both things you have to turn and could be a reference to Turner’s last name.