PBS KIDS launched "Molly of Denali" on Monday, July 15, making it the first animated series of its kind to feature a lead character that is an Alaska Native.

Native American children will finally be able to see themselves depicted accurately on national television. WGBH Boston along with PBS and the Corporation for Public Broadcasting (CPB) has partnered with a group of Alaska Native advisors and consultants to ensure that every aspect of the children's show about a young girl and her family who run a rural trading post in Alaska, is accurate and reflects their culture in a positive light. Molly of Denali is geared towards children between the ages of 4 and 8, and features "feisty and resourceful 10-year-old Molly Mabray, an Alaska Native girl."

The light-hearted series follows Molly as she helps her parents run the Denali Trading Post, a general store that is also a bunkhouse and transport hub in a fictional village in Alaska. Kids will enjoy watching Molly's daily adventures with her dog, Suki, and her friends, Tooey and Trini, as they fish, build snow forts, make deliveries via a dog sled, and more. Each episode will include two 11-minute stories, along with live-action segments that feature real children and areas of Alaska. Molly also uses a video blog to share her life with kids all over the U.S.

Linda Simensky, the Vice President of Children's Programming for PBS said in a press release, “PBS KIDS programming is rooted in education and inclusion, and we are always looking for new ways to highlight the many different communities that make up America.” She goes on to say, “With Molly of Denali we’re building on that commitment. We believe this series will provide more kids with the opportunity to see themselves represented in our programming and are excited to engage all kids with the culture and traditions of Alaska Native peoples.” 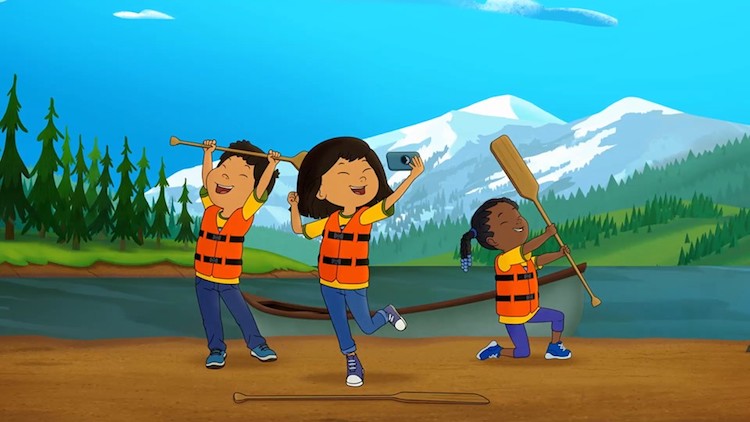 Dorothea Gillim, an executive producer of the hit series Curious George, and Kathy Waugh, a writer on Arthur, knew they needed guidance when creating this original series. They're both from the East Coast and knew that in order to fully represent a character well whose heritage is from three Athabascan groups (Gwich 'in, Koyukon, and Dena 'ina), they would need a team of advisors. They ended up hiring 60 people who are Alaska Native, Indigenous, or First Nations, and who represent each area of Alaska that Molly of Denali talks about. Each voice actor is also Alaska Native or of First Nations heritage.

Parents of all nationalities will appreciate their children learning how to solve problems with the help of guidebooks, maps, and internet search engines. In one episode, "Molly uses a map of the land surrounding her village to find and fix a wildlife camera that was livestreaming an eagle’s nest while babies hatched." Molly also spends time on the show learning about her cultural heritage and how she can still uphold her ancestry while being a member of the younger generation.

Kids (and parents) were able to get a sneak-peek of Molly of Denali through their eight-episode podcast series which started in May and ended July 11. The "prequel" podcast was a way to introduce children to Molly and her unique family. Her mom is a bush pilot, her dad is a wilderness guide, and her grandpa is a volcanologist. The podcasts are still up on their website, so you can learn more about Molly and her interesting life while on-the-go. The TV series and podcasts are meant to complement each other and allow viewers (or listeners) to access Molly's world in multiple ways.

If you missed the premiere on Monday, you can catch episodes all week long on their website. Or, you can check your local PBS listings for days and times.

Have you checked out Molly of Denali yet? If so, what did you think? Let us know in the comments!