The special celebrates the 75th anniversary of "Thomas and Friends" and features Her Majesty Queen Elizabeth and Prince Harry.

Everyone’s favorite little blue engine is celebrating 75 years in 2020 with new content, characters, ebooks, music, and product partnerships. It all begins with a new special that launches on Netflix on May 1 called Thomas and Friends: The Royal Engine. The show details Thomas’s first visit to England and features appearances by a young Prince Harry and Her Majesty The Queen. Prince Harry, the Duke of Sussex, also voices an introduction for the special.

Thomas the Tank Engine was created in 1945 by Rev. W. Awdry for his son Christopher. The popular blue engine has been a popular figure for children around the world, including Prince Harry. The series has dozens of characters that have been brought to life in books, TV shows, toys, and a life-size engine that children can visit in train stations across America. 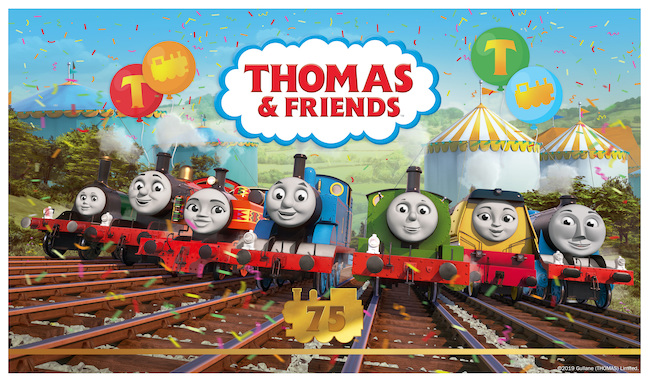 In addition to the 75th Anniversary special, Netflix will have two other Thomas & Friends specials titled Thomas & Friends: Marvelous Machinery. A new birthday-themed series is also coming to YouTube, and a collab between Nitro Circus and Thomas called “Life-size Toys” will be featured on the Quibi app. Parents will also be able to pick up some new Thomas & Friends books and read books with friends and family over the Caribu video call platform.

Thomas is also getting a podcast that will feature short 10-minute stories and will be available on several podcast platforms. Kids can also listen to 50 new Thomas songs, including a special birthday album, all launching this year to digital music stores and YouTube. Thomas is also making his debut on the Calm app, with free stories designed to help kids go to sleep. The podcast, music, and Calm content will all launch during the month of May.

Parents and children can expect to see a lot of fun birthday-themed merchandise and toys in stores this year.

Are you celebrating Thomas's anniversary? Are your kiddos big fans? Tell us in the comments!