'The Simpsons' Predicted the Standouts of 2020, From Coronavirus to Murderous Insects

'The Simpsons' Predicted the Standouts of 2020, From Coronavirus to Murderous Insects

Who needs a crystal ball as long as "The Simpsons" are still around?

It's probably inevitable that when you've been on the air for over 30 years, you are bound to get a few things right about the future. But, The Simpsons seems to have an uncanny ability to predict specific events years before they happen. From correctly predicting Superbowl matchups, and often predicting the winner, to Disney buying 20th Century Fox (Simpsons predicted this way back in season 10. It actually happened in 2018), they've made some stunning predictions.

And the writers of our favorite Springfield character adventures are at it again in 2020. Maybe they really know something we all don't ...

While technically, the presidency started with the election in 2016, The Simpsons ran an episode on March 18, 2000, titled "Bart to the Future" in which Bart plays a wannabe musician, and 38-year-old Lisa becomes the first straight female President of the United States and moves into the White House. She takes over the presidency from the previous Commander in Chief ... Donald Trump, who left "quite a budget crunch," according to President Lisa.

Watch this episode of The Simpsons on Amazon Prime Video (Season 11, Episode 17). 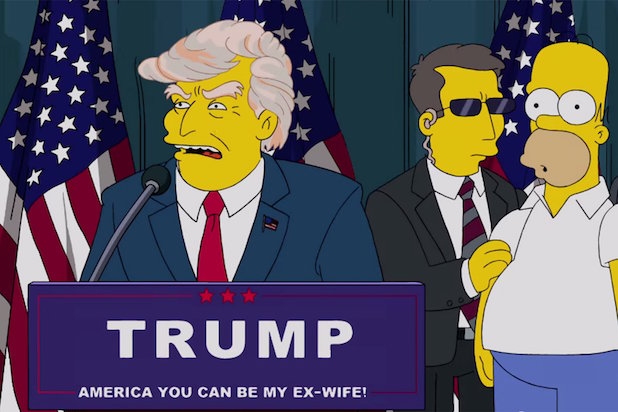 The Coronavirus and Murder Hornets in One Year

I don't what sorcery the writers of The Simpsons conjured for this one, but they predicted both the COVID-19 and the invasion of murderous hornets. Probably more unfortunate, they also seemed to capture the mob mentality of the human race when faced with the unknown.

Way back in 1993, an episode titled "Marge in Chains," featured a Japanese factory worker who accidentally spreads the contagion to Springfield. People panicked and rushed to find a cure, and in their mob, accidentally knock over a van filled with killer bees. In the town peoples' rush to find a cure, they accidentally knock over a van with killer bees inside. Some feel this is a prediction of 2020's COVID-19 pandemic in conjunction with murder hornets showing up in the states for the first time. Man, 2020 is a nightmare—we probably should have heeded The Simpsons' warning. "Murder hornets" in America has coincided with the coronavirus outbreak in 2020.

Watch this episode of The Simpsons on Amazon Prime Video (Season 4, Episode 21).

Blue vs. Red States in the 2020 Election

Might be a bit of a stretch but in a 2012 episode, Mr. Burns endorses Mitt Romney standing in front of a blue vs. red breakout map of the states. It looks awfully like the map from the breakout of this year's election.

The Simpsons never fail to predict the future..😯 pic.twitter.com/qKIntObhZq

Watch this episode of The Simpsons on Amazon Prime Video (Season 24, Episode 3).

Basically Any Abysmal Season of the Denver Broncos, Including 2020

If you are a Broncos fan, you are no stranger to Simpsons' predictions, from Homer being disappointing in being given the Broncos by Hank Scorpio, to their prediction of the Broncos-Seahawks Superbowl (though they got the score waaaaaaay wrong on that one—oof). So, it's not like they've really picked up any new Broncos jokes or future predictions, but the one below still pretty much sums up the year (and really the whole football season this year for all teams).

Aww The Denver Broncos GIF from Denver GIFs
Watch this episode of The Simpsons on Amazon Prime Video (Season 8, Episode 2).

So in short, we should probably all start watching The Simpsons pretty closely and prepare our lives accordingly! What do you think about The Simpsons' predictions, let us know in the comments!