Standley Lake Regional Park in Westminster, Colorado, is a known nesting place for bald eagles and has operated a live webcam depicting the lives of a family of bald eagles who have lived together in the park for about five years. The parents currently have three eggs waiting to be hatched in their nest and viewers have enjoyed watching them prepare for the new arrivals.

Last week, however, the camera caught something other than domestic bliss when an intruder eagle swooped in and attacked the mother and father eagle.

The video (below) shows the mother eagle growing agitated as she senses something amiss, then shows the larger eagle swoop in and directly attack the pair. The intruding female eagle had been attacking the nest starting the afternoon of April 6 and stepped up the severity of the attacks that evening, resulting in the mother eagle being injured and chased out of the nest. The female intruder can be seen as quite interested in the eggs.

According to officials, the father eagle was seen the next morning with an eagle who had blood on its face and feet, but that eagle has since flown away. It's assumed she is the injured mother, who has taken shelter to heal. This is believed to be the case since the father was not attacking the injured eagle.

The father eagle has returned to the nest and is taking care of the eggs, spending long periods of time observing, rolling, and incubating them. The intruder eagle—or floater eagle, as the park has been calling her—has been back to the nest several times and been chased off by the nesting father. She does seem to spend periods of time perched above the nest while he guards the eggs, as well as showing behavior that may indicate an interest in the father.

This has turned into a long-term event, with a lot of people quite interested and concerned over the fate of the mother eagle, and unhappy at the idea of this intruder eagle taking over her role.

The park has been providing updates on its Facebook page, and plenty of other non-official and eagle watching pages have been posting information and observations. 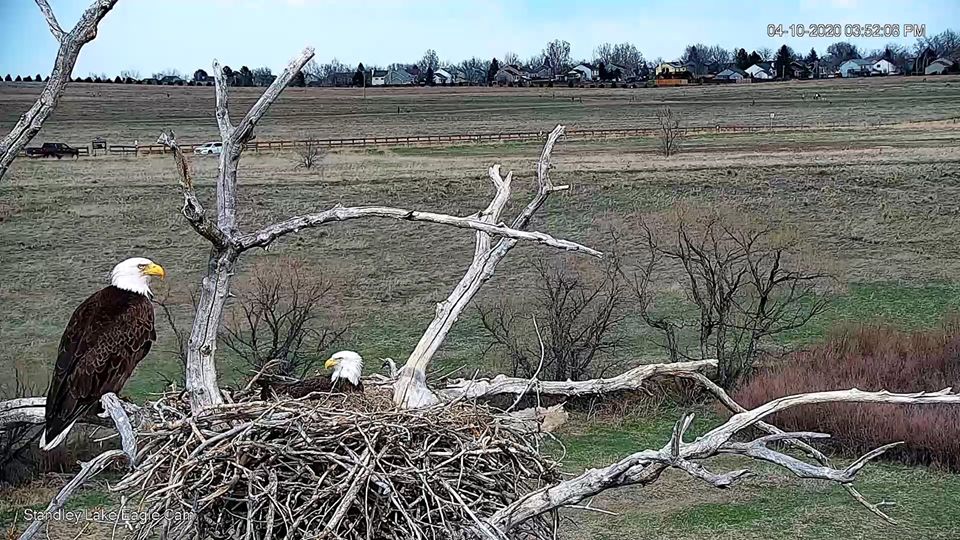 The intruder eagle, as father sits on the nest. Courtesy of Standley Lake Regional Park (Facebook)

Park staff are careful to point out there is no evidence to indicate the mother eagle did not survive, and stress that her instinct to survive will take hold. "Her instincts for survival might override her instinct to raise her young and protect her territory, so that could explain why she has yet to return to the nest if she is still alive."

As well, they remind us, that as hard as it is to see and hear the heartbreaking story of a mother forced out of her home by an attacking interloper, this is not completely unusual behavior for bald eagles. There's a lot up in the air as the situation plays out. The eggs are due to hatch any day, though it is impossible to know if they are still viable. The father’s behavior indicates they may be, though he has no way to really tell and is likely acting on instinct.

It's notable to point out the eagles have had multiple eggs with only one or two hatchings in previous years. According to the park, there are several ways this may play out.

“The floater has been demonstrating behavior that might indicate courtship. Dad does not seem interested in the slightest. If he were to become interested, this does not mean that she will incubate the eggs, since she doesn't have the appropriate hormone levels to induce this behavior. She will not necessarily help raise eaglets if they hatch, either.

If Mom does not return, Dad has the option to consider the floater as a mate later on in the year. If Mom does return, there have been instances where the floater acts as a step-mom. There have also be instances of one dad and two moms that successfully both raise eaglets. While a floater intruding on a mated pair isn't a super common event with bald eagle nests, it does happen occasionally and there have been many success stories as a result.

There are many "if's" and too many variables to make an assumption about what will happen. We will just have to be patient and let nature take it's course.”

Sound off with your thoughts in the comments below.

VIDEO: A Calf and Rooster Cuddling Together Is the Sweetest Thing You Will See Today