Z and Wick sit back and relax at the BASA Gym in Rosedale. Photo provided by Jason Morstein
Kaitlin Kulich 8/4/20
Join the Community
shares

Getting back to the gym after months of quarantining is easy when dogs are around!

Although gyms across Maryland have been reopened now for over a month, some people may still be hesitant to return. However, for those that feel comfortable but lack the motivation to return to a gym, there are some gyms providing a unique incentive—by being dog-friendly.

“We are fortunate to be in a really good location and have a great client base. There’s a lot of positive energy and it’s just a very welcoming atmosphere for people,” Jason Morstein, owner and head coach at Baltimore Area Strength Athletes ( BASA) gym, said.

The welcoming atmosphere at BASA is due in large part to the dogs that come in with their owners. The gym has seen around 10 different dogs come in since Morstein opened in 2016, and there are about four dogs that come in on a regular basis—something that gym members love about BASA.

“The amount of joy that is on people’s faces when Z walks in is great. It puts everyone in a good mood. I walk in and people are not that excited to see me!” Morstein laughed. Z is Morstein's big friendly dog who was the gym's first regular four-legged member. 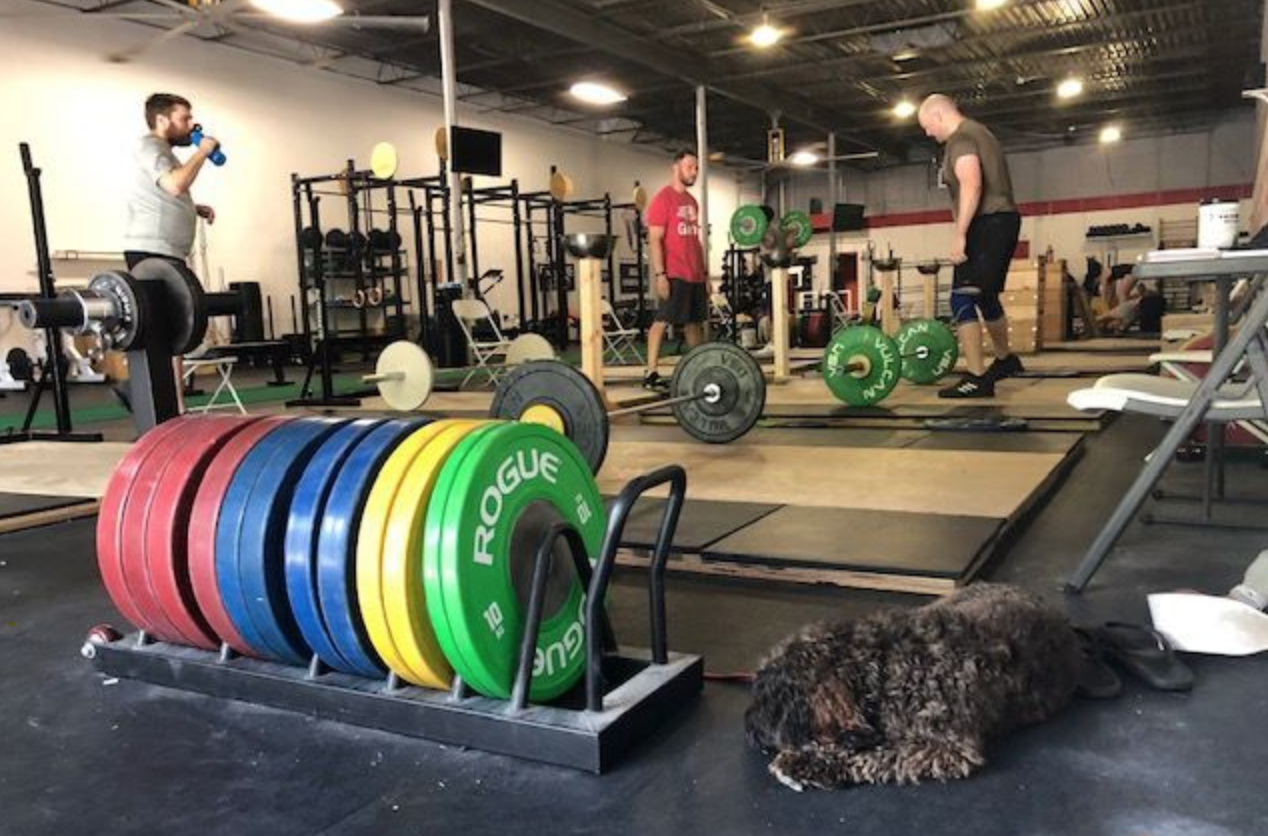 Murphy taking a snooze while members work out at BASA Gym. Photo provided by Jason Morstein.

“We take him all over the place, whether we are traveling to see family or going on hikes. When we were opening this facility he was with us all of the time and he loves people so he was with us when we started building a client base,” Morstein said. “People loved seeing him so it kind of triggered others to say, ‘hey, can we bring our dog in?’.”

Morstein said he understands dogs and their owners may have gotten more attached to each other due to the coronavirus causing people to be at home more. That is why he wants to make it easier for people to get back to their routines by allowing people to bring their dogs into the gym.

“I have no problem with people bringing their dog in and trying it out. We have a little fence we set up that people can put their dog in, or some people will just keep them next to them while they are lifting,” Morstein said.

“We have just a few simple rules. If a dog is uncomfortable and is barking a lot or gets in the way of people they are not allowed. They can’t just run around because it’s not only dangerous for them if something gets dropped on them but it’s dangerous for everyone else."

Another gym that welcomes its doors to four-legged furry friends is The Fitness Center of Havre de Grace.

Kim Peters, owner of the Fitness Center of Havre de Grace, said she wanted her gym to be dog-friendly because she wanted to make it easier for people to commit to their workout routines.

“So many people don’t go to the gym and they don’t do things after work because they worked all day and their dogs have been alone. So, they lose out on their fitness.”

Peters said by being dog-friendly, she hopes it will show people who think they don’t have time for a dog that they can find ways to make time for them—especially dogs that need to be adopted.

“All our dogs are rescues and having them here is a great way to showcase what rescue dogs can look like because they are all different. We adopted Misty with the intent of her being a gym dog. Maybe someone who comes here will adopt a dog after seeing how it can fit into their life.”

Peters said she has several members who bring in their dogs. A Belgian Malinois, who was once an army dog, comes in with his owner who works long hours and doesn't want to leave him home alone once she gets home. Two Australian Shepherds, a Blue Healer and a Miniature Dachshund also come in with their owner and enjoy the treats and toys that Peters has in stock for all her four-legged members.

Dogs who come to The Fitness Center of Havre de Grace have to be socialized and not bother members too much when they work out.

“I just follow my own rules that I set up. I do tell people before they sign up that we are a dog-friendly gym with the understanding that people who do not like dogs may not come here.”

Many of the gym’s members can be seen playing fetch or petting a dog that comes in while they rest during their exercise sets and Peters even has a running club that allows people to run with their dogs. 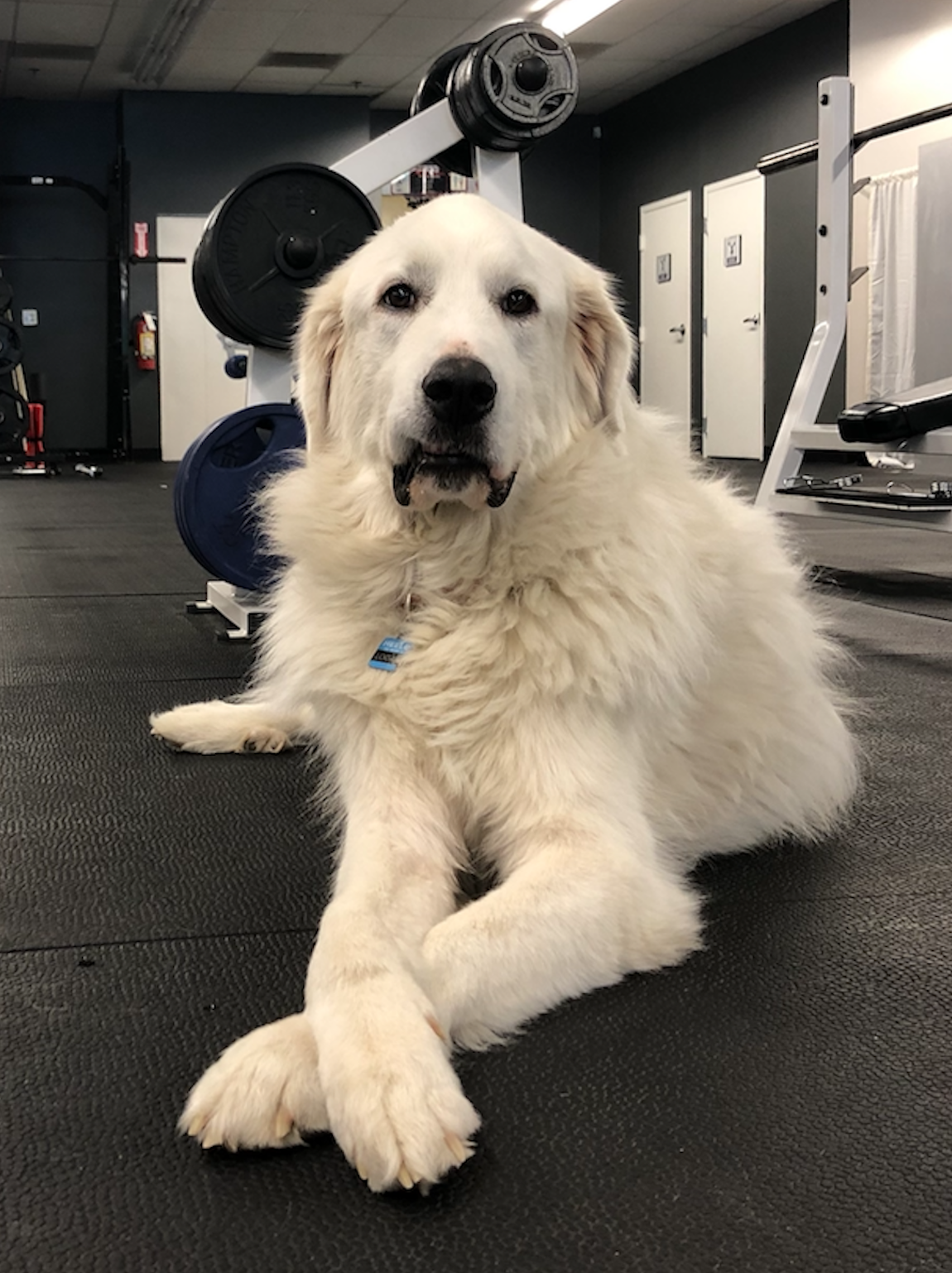 “My goal is to have a 5k run one day with dogs where we can raise money for some kind of dog organization whether that be for police dogs or a rescue shelter,” Peters said.

“I think having dogs here makes it more homey, and makes a more community feeling for everyone. We have a few members who love coming in because they live in apartments where they can’t have pets so this is a nice opportunity for them,” Peters added.

“I mean, we get to lift weights and be with dogs, it’s just great.”

Have you been to a dog-friendly gym before or know of any other dog-friendly businesses in your area? If so, let us know!

What Is Hygge? And Why Should We All Be Practicing It?

A Pumpkin-Rich Recipe That Will Energize Your Fall Workout

VIDEO: This Short Film on YouTube Is the Most Accurate Representation of 2020 We've Seen