The "Art of The Brick" takes LEGO magic to new heights with amazing creations.

Artist Nathan Sawaya uses a different medium than other artists; LEGO bricks, the interlocking plastic blocks that have delighted children and adults for decades. Sawaya began his Lego experience like millions of others do, as a child playing with sets and creating worlds of his own with the blocks. After building a career in law, he found his way back to creative expression, in the form of amazing and moving LEGO sculptures.

An exhibit featuring Sawaya’s work is currently on display at the Denver Museum of Nature & Science (DMNS), and it's called The Art of the Brick. It's made up of over 100 large-scale LEGO creations, with some being replicas or representations of historical art, while others are original compositions of the artist.

"Sawaya has earned a top position in the world of contemporary art and created a new dimension by merging pop art and surrealism in awe-inspiring and groundbreaking ways. His art consists of playing with the material, color, movement, light, and perspective," said the DMNS.

The exhibit has traveled the globe and visited over 20 different countries and six continents before making its way here to Denver’s museum. DMNS is a place that holds special meaning for the artist, as it was the very first museum he visited as a child, and having his own work on display there is a very nostalgic and personal experience.

The pieces on display include a Tyrannosaurus rex, some incredibly detailed clouds, giant crayons, replicas of well-known works like the "Venus de Milo," and a very moving original work called "My Boy 2." That one depicts a haunting figure holding the limp body of a child and is truly an emotion-evoking piece.

Sawaya also debuted a brand-new sculpture in the exhibit "The Big Blue Swimmer," a piece consisting of 120,000 LEGO bricks depicting a swimmer emerging from the sea.

Check out this video showing some of The Art of the Brick exhibit shared by the Museum:

Sawaya personally constructs each sculpture, gluing down every single brick as he places them. It's a painstaking (and often obsessive) process, taking a toy and transforming it into a piece of fine art. The process can take days or even weeks, and each sculpture reflects the passion and dedication of the artist.

Some of Sawaya's work has already been seen around the Mile High City over the years, like his "ParkPeople" LEGO figures that popped up around the city in the spring of 2019. 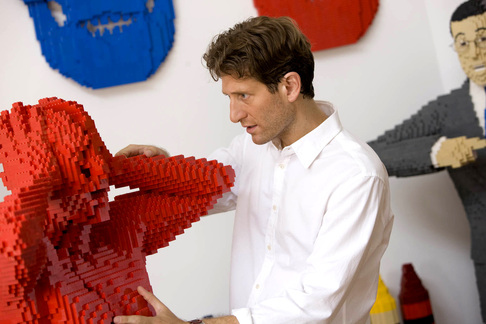 The Art of the Brick is open now and included with museum admission. It will stay at the DMNS until January 24, 2021. Several precautions are in place to keep the public safe, including online tickets, timed entry, and requiring masks for most visitors.

This exhibit looks like it will speak to both the kid and the art lover in all of us. What would you build if you could build anything out of LEGO? Let us know what you think in the comments.