New to Colorado: A Day Trip to Mount Evans Through the Eyes of a New Resident

New to Colorado: A Day Trip to Mount Evans Through the Eyes of a New Resident

A new resident of Colorado tells her adventures of living in the Centennial State. First stop: Mount Evans.

I am a new resident of Colorado—I haven’t even made it to my first anniversary in the state! It's a unique experience, moving to a new state, a new country, without knowing much about what life would be like. I’d heard the mountains were majestic, and they weren’t kidding. Even though I was used to the sight of green mountains on my island, I had never seen mountains like the Rocky Mountains. They said there were always tons to do and all the dogs you could ever pet. (The latter did not disappoint.)

Aside from a few fun facts of Colorado, I knew very little about the Centennial State. But how do you even start? How does a place stop being a foreign land and become your home? Well, I suppose the answer lies somewhere between the everyday moments and diving headfirst into adventure.

These are my stories, as a newly Coloradan, a list maker, and a daydreamer, exploring my new home, Colorado. 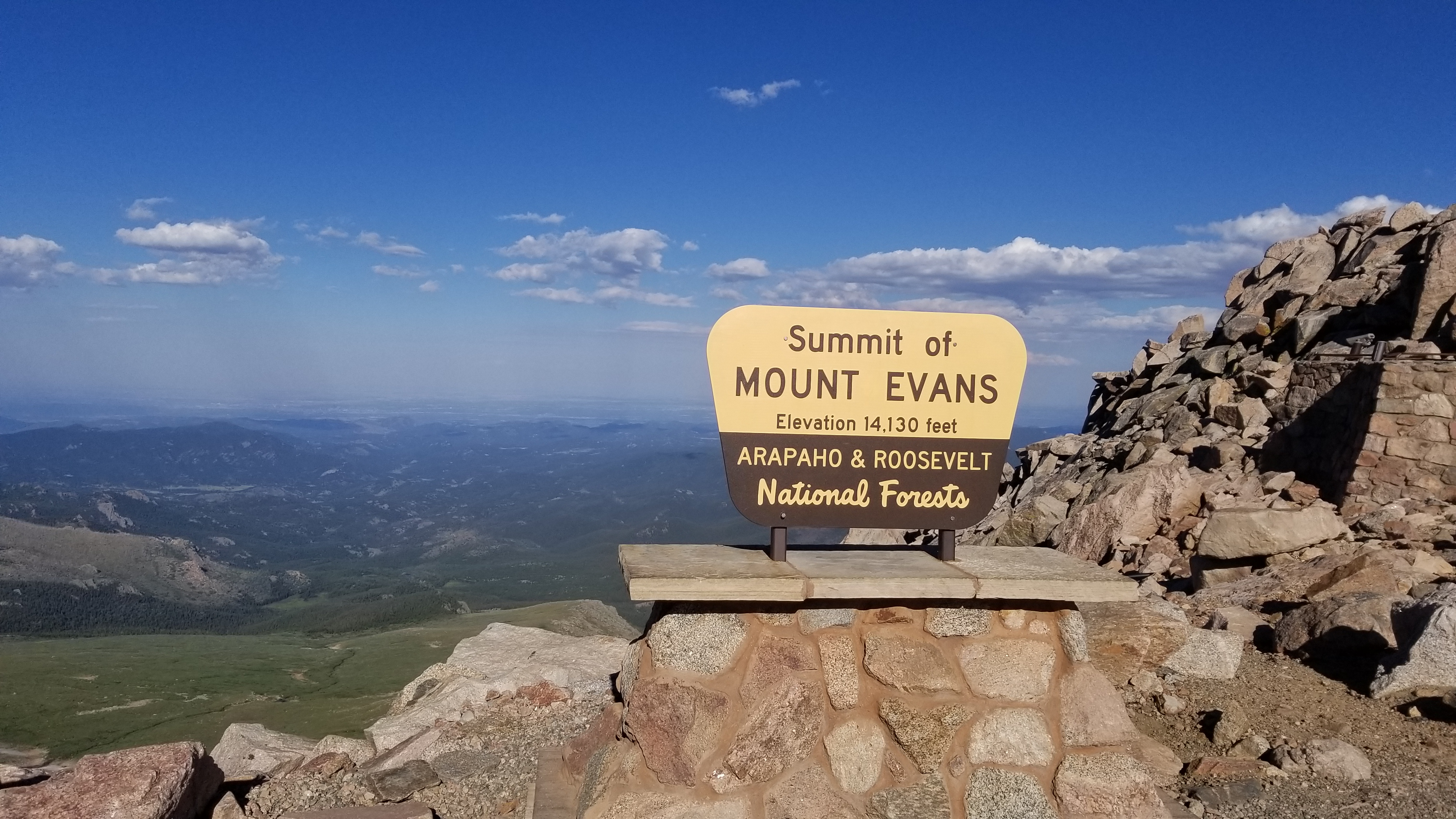 One of the first things I learned about living in Colorado, during my months of research before moving, was that you couldn’t really call yourself a "Coloradan" if you didn’t like hiking. (Okay, it wasn’t verbatim, but the sentiment was implied.) I made a short handwritten list of things I wanted to do as soon as I got there:

Unfortunately, when I arrived in Colorado, I quickly learned some crucial information. Mount Evans is closed the majority of the year, usually open from Memorial Day through the first weekend of October. I had missed it by just a few weeks. So, my patience was put to the test. Six months, two polar vortexes, and one extended winter and no spring later, Mount Evans still remained closed. Memorial Day came and went and still no announcement of open season. I was worried I wouldn’t be able to cross off my list the one thing I had anticipated before even moving to the state.

I remained patient, but as the months went by, the idea of making it to the top of Mount Evans gradually went down on my list of things to do in Colorado. Then, on June 7, it happened. The 14er was open to the public. It was time.

To the Top of Mount Evans

Even as the open season was up and running for a few weeks, there were rumors the top section of the road towards the summit would closer sooner than later. I couldn’t take the risk this time. It was now or never and so, in July, I made my way to Mount Evans. 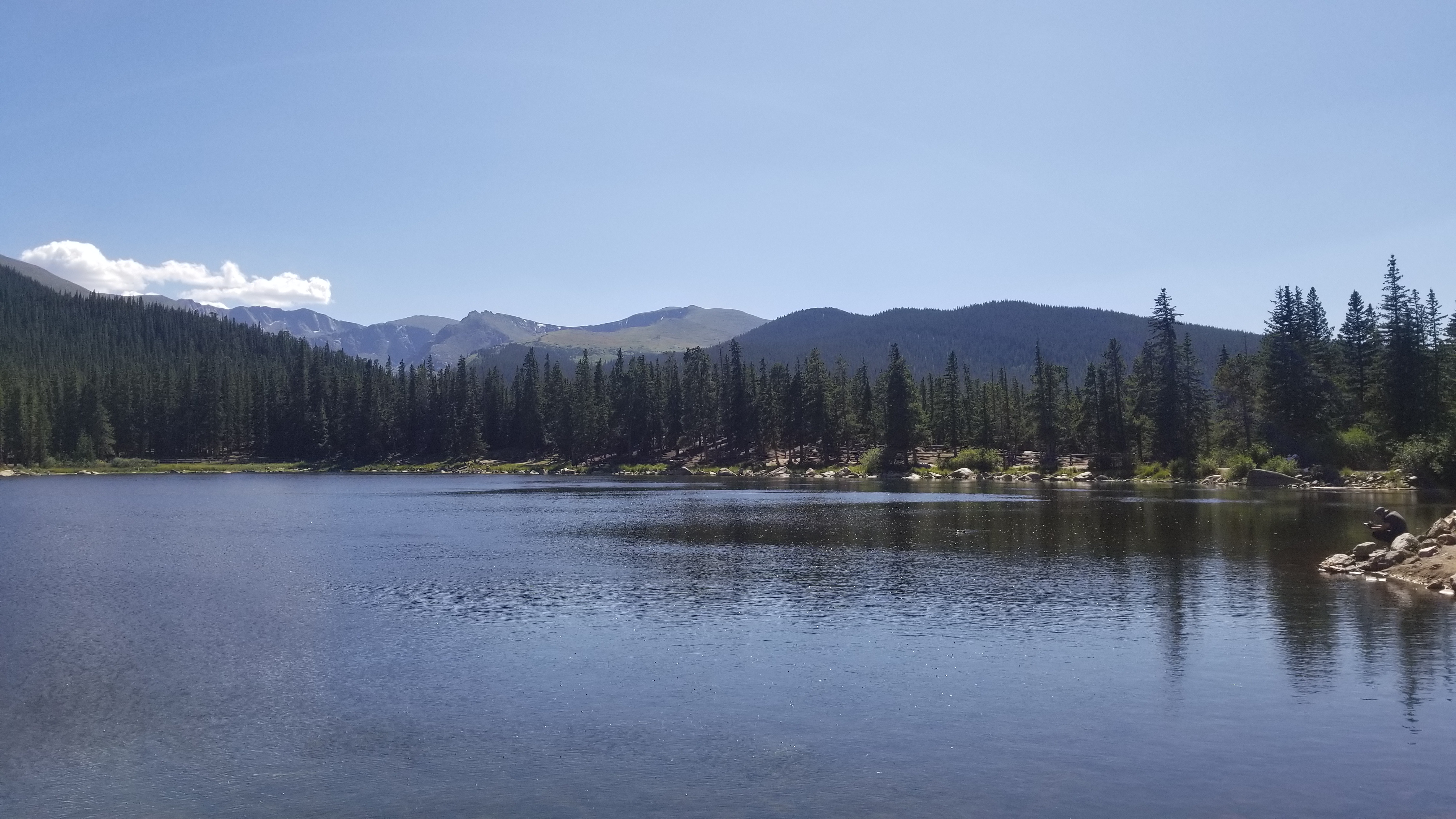 We were greeted by a lovely park ranger who charged us for a three-day pass to the mountain. To her right was an empty wooden booth with an erasable board hanging from the front of it. In colorful writing, the board informed all visitors of the weather at the top of Mount Evans. Another ranger wiped the number 57 and wrote with a marker 54, a whole 30 degrees colder than the weather in Denver, at the time. With a ticket pass and a smile, we were allowed to commence our drive up to the summit.

The slopes of Mount Evans felt familiar, like any other drive through the Colorado Mountains, winding roads trimmed with tall lodgepole pines, but it didn’t take long before we emerged from the forest green tree line into a desolate tundra.

The green color palette was left behind as we went up the hairpin bends, one after the other, the rocky body of the mountain on one side of the road and cliffs without guard rails on the other.

Suddenly, it was clear why the scenic byway is closed for the majority of the year. One sprinkle of snow on those lanes, even light rain, could mean an accident or worse. And even on a perfect day like this one, with sunny cloudless skies, I could barely loosen my grip on the steering wheel. When driving on the inside of the road, I would attempt, or pretend, to take in the view. When the road turned and we were on the outside, just a few feet away from the edge of a steep drop, I’d pray to every deity imaginable for protection. There were some small moments of relief when there was land on both sides of the road as we made it to Summit Lake, but it didn’t take long before the winding roads swerved us from safety to potential danger at every turn. It was a long, slow way up to the top. 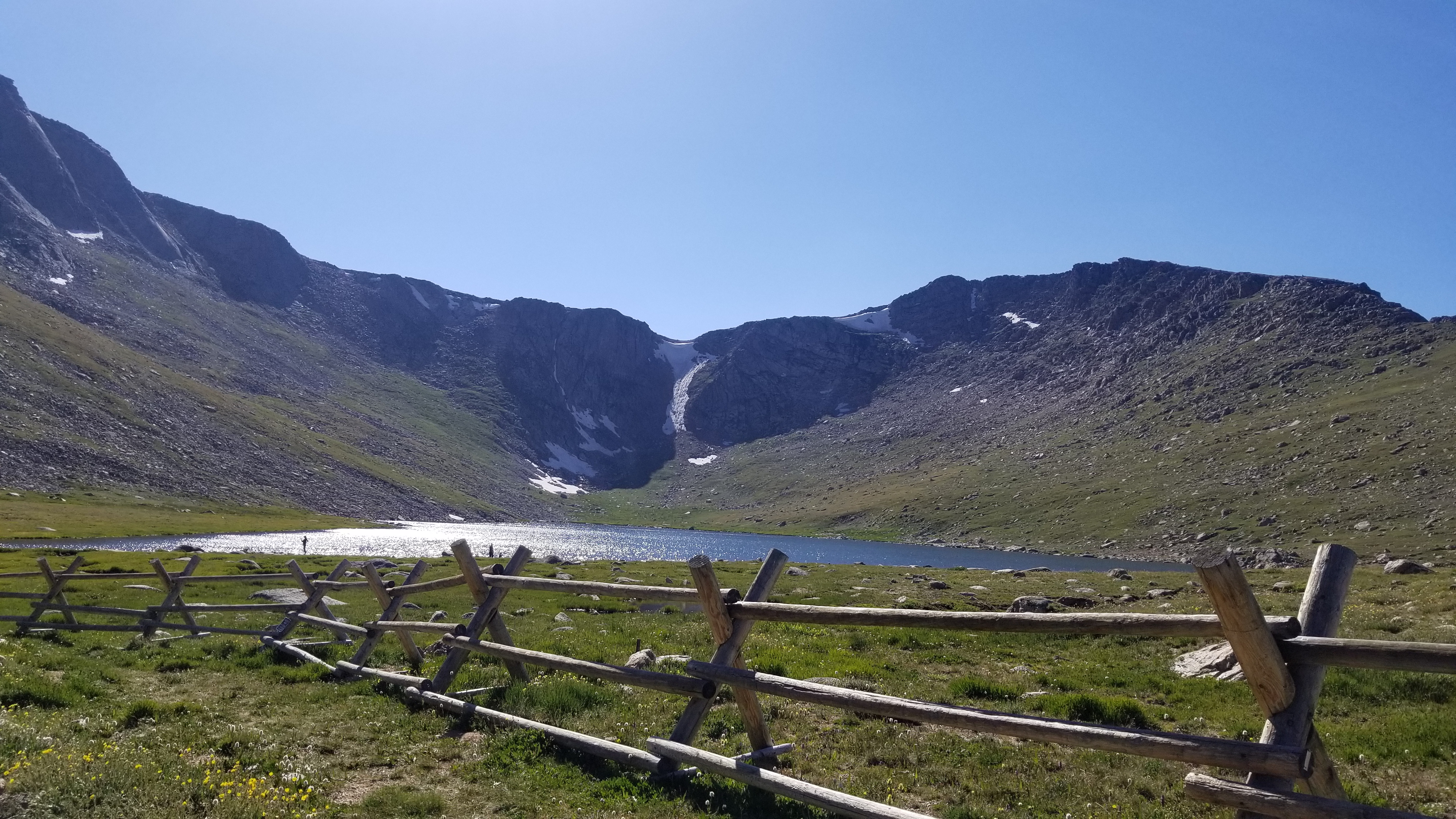 A few prayers and curse words later, we made it to the summit parking lot. To the right, on a hill of gravel and sand, is Crest House and the Meyer Womble Observatory, to the left is the top of Mount Evans. It looked inconspicuous at first, a pile of rocks where people stood at the top and posed for pictures. We were told it was no longer than a 15-minute hike. What we didn’t know was that a 15-minute hike at 14,000 feet feels like an hour-long Olympic event. This is clearly an exaggeration but when deprived of oxygen, hyperbolic statements tend to come out. Even after the first steps up the rocks, I could barely catch my breath. The wind was aggressive and the air was thin. It filled my lungs but I still felt empty.

The pathway up was uneven. Sometimes, it required climbing over large rocks that obstructed the way, or watching out for gravel or gaps our feet could slip and get stuck in. We became so focused on not twisting an ankle and breathing in a steady quiet rhythm that didn’t cause any alarm, for a second, we didn’t realize we had made it to the top. Finally, on the steady ground, I could look up and take in the view. 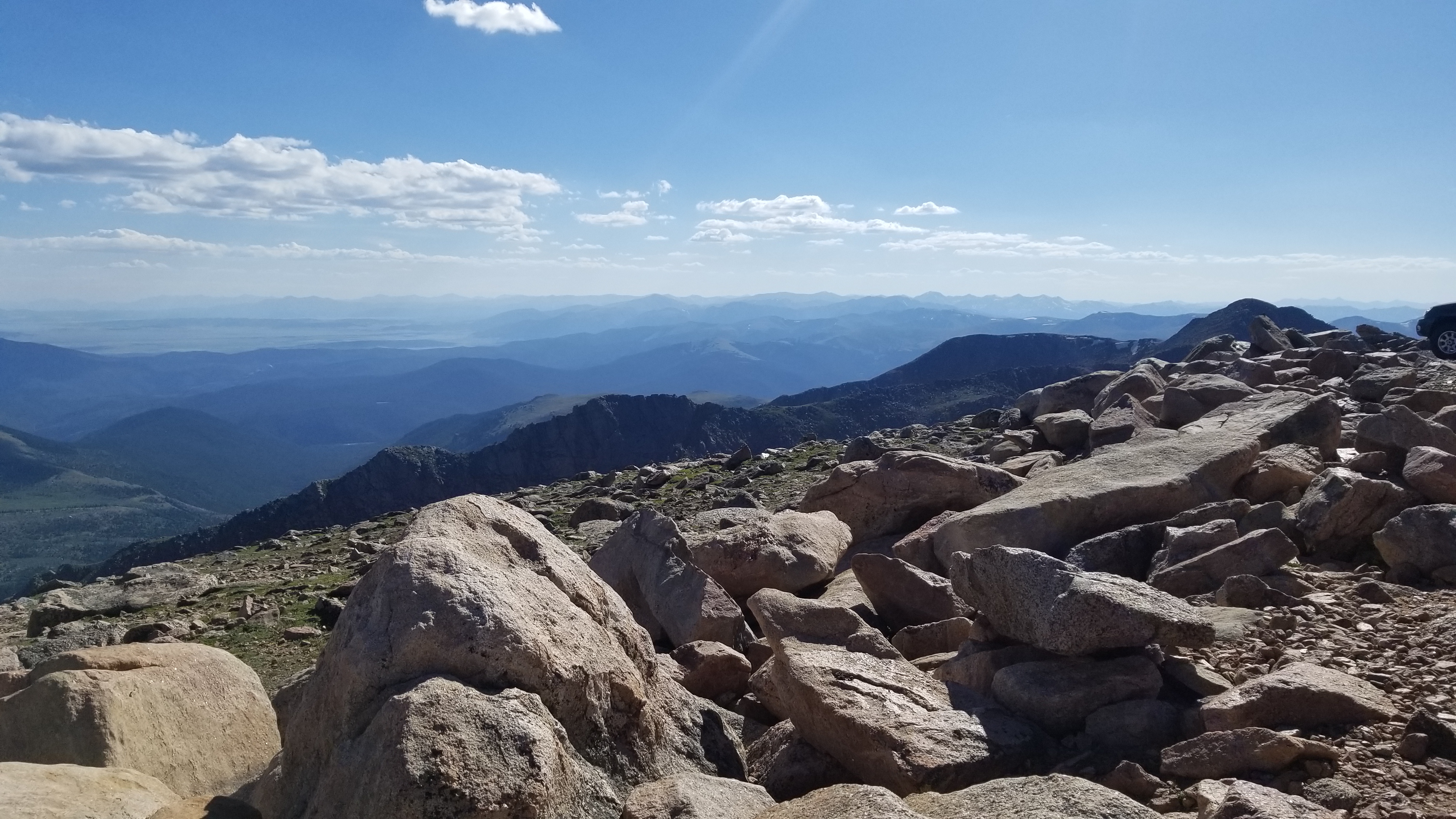 Mount Evans towers over the other peaks in the mastiff, but we could see them for miles, the endless undulating mountains that blurred into the horizon. The silence was deafening, though welcomed. Every now and then, a solitary crow hovered, competing with the force of the wind, but it would fly away. In the middle was a bronze summit marker that read "Elevation Above Sea 14,258 feet".

It was hard to believe we were at the highest peak in the Front Range of the Rocky Mountains. The mountains surrounding it make the height deceiving. But if you were to climb up one of the boulders at the top, which people love to do for a dramatic picture and the thrill of danger, you can see on the other side the thousand-foot drop and Summit Lake, now appearing tiny, at the very bottom of the valley. Suddenly, my legs didn’t feel so steady, even less so with the wind pushing in whichever direction it pleases, and I had to sit down. Trying my hardest not to curl into a fetus position due to my newfound fear of heights (fantastic timing, fear), I took in the panoramic view. It’s breathtaking, no pun intended. But that word doesn’t begin to describe it. In its quietness, Mount Evans shows you its power, the way it ascends from pines to tundra to bare rocks at the very top. The blue sky seemed to blend into the silhouette of the mountains in the distance while the wind incessantly played around with the visitors.

The 14er is stunning and menacing at the same time. People can’t help but continuously take pictures of every angle, but no picture could ever do it justice. You just have to see it for yourself to understand, if you are lucky, and brave enough, to see it in the short amount of time it allows you to.

I could now officially cross off my first Colorado bucket list item. I was so proud that I momentarily forgot we needed to drive all the way down the narrow, winding road, where life would flash before my eyes, yet again. But that’s the thing about fears—it is always worse when you don’t what’s down the road head. On our way down, I appreciated every part of Mount Evans as we said goodbye until the next year.

*Please note: The top section of the road to Mount Evans has been closed for the year since Sept 3. The lower section of Mount Evans road, which leads to Summit Lake, will remain open until Oct 7.*