"Brahms: The Boy II" was as artificial as the porcelain crust on the antagonist's face, bringing a stale sequel to an overlooked original.

As it turns out, the killer doll motif carries little weight in genre filmmaking in comparison to the traditional zombie. While we are constantly oversaturated with the modern zombie apocalypse, films like Zombieland: Double Tap prove that there is still a market for the undead. But the same oversaturation of the killer doll—with the Child's Play remake, the Annabelle franchise, and The Boy films—lacks the same sustainable power.

Perhaps it's the subtle approach to the craft that follows a structure that carries little difference than a haunted house film. Where zombies cross the spectrum of dark comedy (Zombieland) to apocalyptic action flick (World War Z) and to introspective character drama (Cargo), killer dolls remain in a confined box that contains all of the same familiar elements. 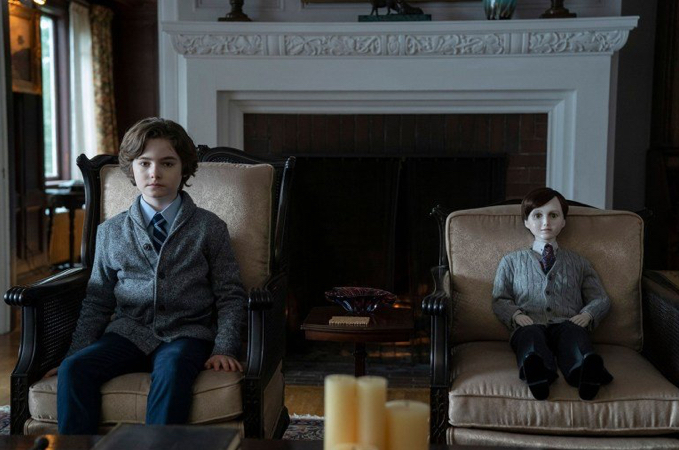 Courtesy of Lakeshore Entertainment (via IMDb)

Unlike The Boy, which manages to break away slightly from the traditional killer doll structure with its fun twist and climactic final act, Brahms: The Boy II decides to carefully pour itself into the creepy doll mold and harden into a replica of a macabre figurine we've seen time and time again. The framework for the film has the appearance of something manufactured for the sake of mass-producing a product to put on the shelves and not a meticulously crafted model to be put on display and admired.

Brahms follows a couple and their young son in the aftermath of the mother and child surviving a home invasion. They, predictably, accept an enticing offer to take up the estate from the first film to escape the trauma. The son refuses to speak since the incident, but begins to show improvement upon finding the titular doll in the woods outside the home. The parents concede in allowing the son to build a bond with the admittedly unsettling doll on advice from their therapist, who encourages the opportunity to mend the child's trauma. Of course, the doll begins to commit violent or disturbing acts and the child is regularly framed despite his silent protests to direct the blame to the real culprit. It's all pretty standard stuff that inevitably lacks the payoff offered by the film that preceded it.

The Boy, while generally formulaic, did offer some unique storytelling opportunities. I appreciated the Poltergeist-like approach to investigating tendencies in the haunted doll's behavior to capture evidence for other characters to witness. It allowed the plot to travel down avenues that are slightly less traveled and to keep the plot engaging while the film is altogether less tense than most genre films of a similar ilk. And it all culminates in a final act that properly turns the story to reward the audience.

However, in the sequel, the story is siphoned and funneled back into orthodox pipes that have begun to rust from overuse, cheapening the direction of the first film's fun ideation. The Child's Play remake took us down an entirely different path that focused on our reliance on technology. The Annabelle films admirably try to keep things fresh by using the doll as a conduit for all types of menacing entities, as evidenced by the latest entry, Annabelle Comes Home. The Boy attempts to turn the haunted doll idea on its head through its climax. But Brahms gets lost on the shelf of generic creepy doll films with a lack of character that would differentiate it from any aging colonial antique.

Brahms threatens to hold horror in a lull through the first two months of 2020, with few entries briefly driving the needle upwards. It's time to put the killer doll on the shelf for a while and shop around for something different.

The only hope for February is The Invisible Man reimagining next weekend, which may provide some much-needed momentum heading into March. Next month boasts several promising genre films with Beneath Us, A Quiet Place Part II, Bloodshot, and the controversy-laced The Hunt. Then, April may keep it going strong with The New Mutants, the much-anticipated Antlers, and Antebellum to close out the month. While 2020 may have taken a while to warm up in genre filmmaking, a little patience and hope may soon pay off.