The new cards will be available in games sold later this year.

A classic party game is changing one of its most popular features to keep up with the times. Hasbro, the maker of the Monopoly board game is updating the “Community Chest” category and is asking the public for their input. Fans can visit CommunityChest.com to view and select their favorite cards. The top 16 will replace the old community chest cards. Hasbro will also be hosting a celebrity Monopoly game on YouTube this spring. Celebrities will compete for $350,000 in Community Chest Funds to be donated to the charity of their choice.

The cards for the Community Chest square on Monopoly have remained the same for the board game’s 85-year history. When a player lands on the Community Chest square, they must choose a card and either pay a fine or get a reward. The original cards feature actions like “Pay poor tax of $15,” “You have won second prize in a beauty contest, collect $10,” and the classic “Get out of jail free.” The new cards will feature more modern, socially conscious tasks.

“The world has changed a lot since Monopoly became a household name more than 85 years ago, and clearly today community is more important than ever,” said Eric Nyman, Chief Consumer Officer at Hasbro. “We felt like 2021 was the perfect time to give fans the opportunity to show the world what community means to them through voting on new Community Chest Cards. We’re really excited to see what new cards get voted in!” 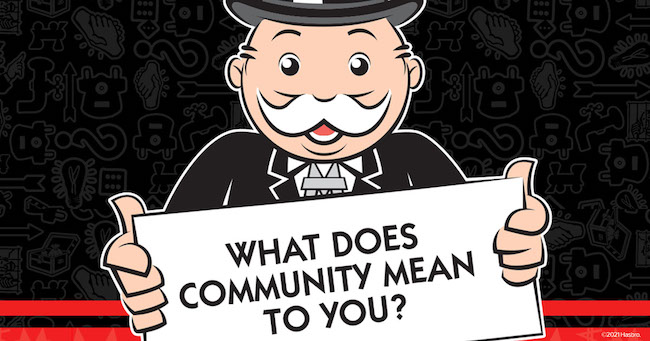 Some examples of the proposed cards include: “ You didn’t shop local, pay $50,” “Your cousin forgot their wallet! You happily pay for dinner, pay $50,” and “You spend the day playing games with kids at a local hospital, collect $100.” Hasbro will post the winners on social media and the new cards will appear in games this fall.

How do you define "community"? Tell us in the comments what your "Community Chest" card would say.