We sat down with author C.R. Richards ahead of her appearance at Denver Pop Culture Con this weekend, May 31 to June 2.

Denver Pop Culture Con (formerly Denver Comic Con) is nearly here! The three-day pop culture extravaganza will be arriving at the Colorado Convention Center this weekend, May 31 to June 2. (Learn more about the convention with our handy guide!)

We had the opportunity to chat with one of many authors you'll have the chance to meet at the convention this weekend! C.R. Richards – a horror and dark fantasy novelist and author behind the Heart of the Warrior series – discusses her latest book, Denver Pop Culture Con, and more.

Check out the full interview with C.R. Richards below.

OCN: Creed of the Guardian, the third book in the Heart of the Warrior series (The Lords of Valdeon and The Obsidian Gates), is set to publish in October of this year. Care to share with us more about that and what audiences can expect?

C.R. Richards: Of course. As you said, it's the third book in the series and it follows the main character, Seth, who's been running – in books one and two – from the agents of evil who are trying to take the talisman that he was given, that he wears, called the Lion Ring ... What the readers can expect in the third installment is that we see him trying to escape with his life. This time, I explore even more about the Lion Ring, and what Seth doesn't realize – and what the reader hasn't seen so far in the series – is that there is something living inside that ring. It's the spirit of the ring. It's very powerful, very angry, and unpredictable, and it doesn't like to do what Seth tells it to. So that struggle, he has to fight that struggle throughout the book while he, at the same time, is looking for a relic that will help him to defeat the invaders who have conquered part of his homeland. 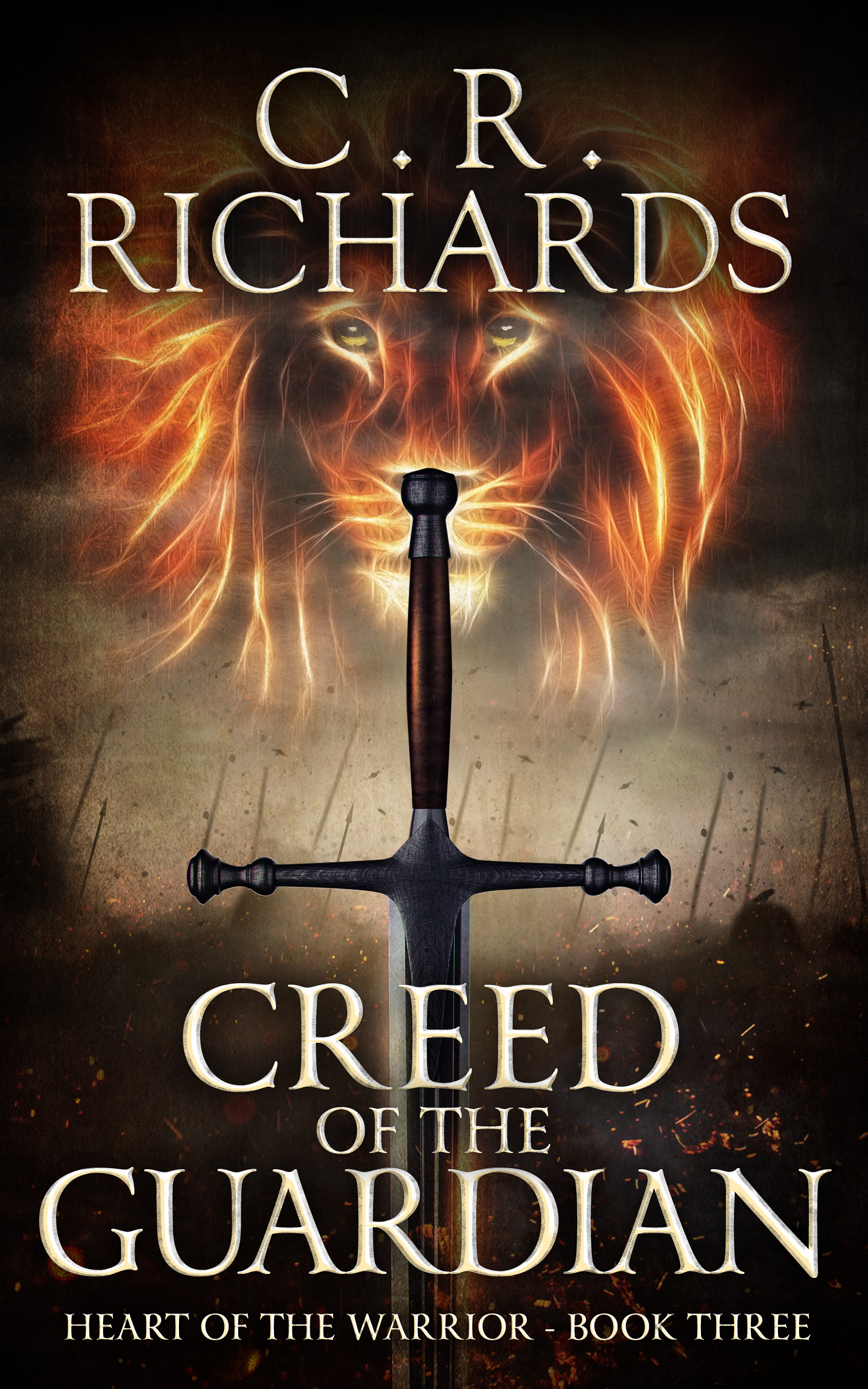 Creed of the Guardian, set to publish in October 2019. | Courtesy of C.R. Richards.

OCN: What first inspired you to become a writer?

Richards: I was lucky to grow up with a grandmother who loved to tell stories, and she would tell us ones when we were children about the gnomes and the fairies who lived around her garden. And when we went to visit her at her house, she would put little candies in our slippers and would tell us that the fairies left them there. So I grew up with that, and I have a lot of great storytellers in my family, and I just always have loved that and it kind of grows from there. I love reading, and ... it's something that I can't remember not wanting to do, so I just always wanted to be an author.

OCN: You’ve written several works across various genres, including fantasy and horror. What is your favorite genre to write, and why?

Richards: My favorite to write is dark fantasy. I love fantasy books where it's set in a world where it's possible that it's normal, that it could be your life if you lived in that landscape, in that place. And then you put fantasy elements – a bit of magic, a bit of paranormal – with it, and I love that about fantasy. Dark fantasy adds an element of horror. I love the classic monster movies, with zombies, vampires, and such, so dark fantasy allows me to take some of my horror background and mix it all together. I love reading the genre and I love writing it.

OCN: What are you looking forward to the most at Denver Pop Culture Con this year?

Richards: The cosplayers! I can't believe how clever and talented some of these folks are. Last year, somebody came as a real, life-sized Chewbacca, and it's like what you're looking at is the movie version because the costume was so good. These folks, they're just amazing to me ... Each year I try to figure out which character from Marvel, DC, Star Wars will be the most popular. And I'm surprised every year. It's a tough one, but I think Captain Marvel will be up there.

OCN: Looking at your schedule for DPCC, you’ll be part of several panels throughout the weekend. One of them is “The Business of Writing” panel, which will, of course, dive into the business side of the industry. What has your experience been like with publishers and literary agents?

Richards: I am a hybrid author, so I'm independently published and I have gone down the traditional publishing route. There are some good things about going with a traditional publisher, and then there are some bad things. But I got to say, I'm doing final edits on book three now and a part of me really wishes that somebody else was editing this for me [laughs]. Because with the traditional publisher, they do all of the book formatting, the editing, book design covers, everything. And I really liked being part of a great team ... It's really nice when you have a group of people, all at the same company, that are working together to put your book out. It's like a group project. Everybody's on the same page, and everyone's excited about it. So it stops being your book and becomes this team effort.

What I don't like though is – it depends on who the publisher is – that once the book's out there, you're kind of on your own anyway with marketing, because they have other books coming behind yours, and they don't always want to spend the money on you. So, that was a hard lesson for me to learn. And I think that's a big part of why I went into independent publishing because if I have to do all of the big parts on my own anyway, I might as well control all of it ... Take classes first on how to do it because when you go independent publishing, you take all the risks and you do all the work.

As far as literary agents, I know a lot of literary agents. They're great to have because they're a champion on your side. And they really do want to see you be successful, because when you are successful as an author then they are, too. So they're great people to have on your side. And they also help you traverse the journey. I did have a literary agent for a while when I was coauthoring books with another author, but because I'm independent now, almost exclusively, I don't have one anymore. So, that might change in the future, but because, as I said, they're great to have. It's nice to have somebody advocating for you. 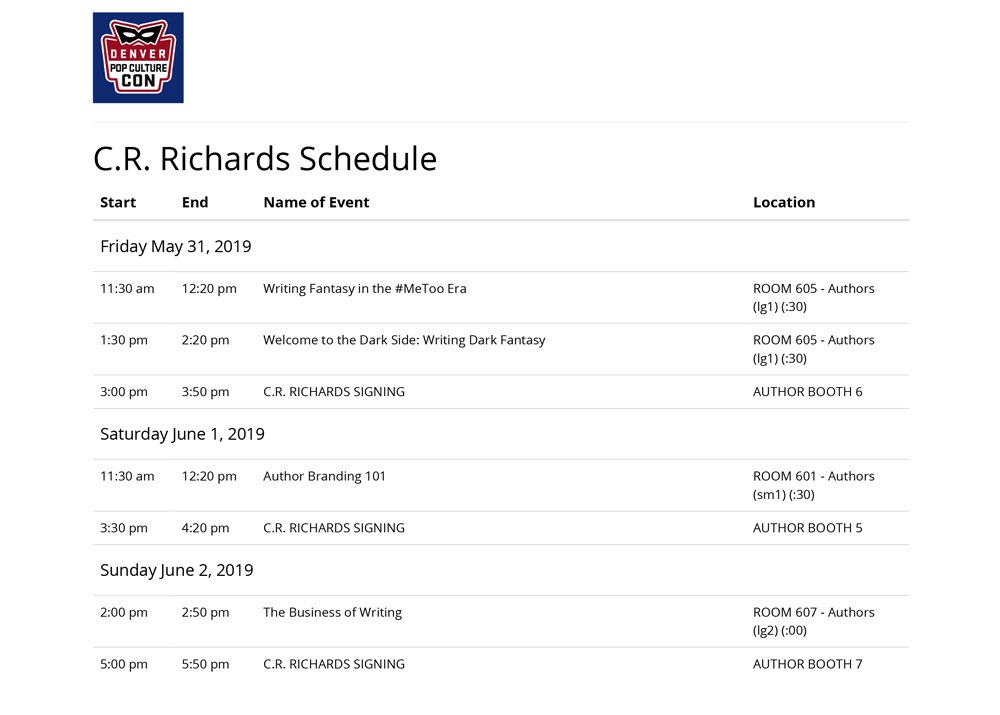 OCN: Do you have any advice for aspiring authors?

Richards: I do. And for everybody that I've talked to who wants to get into writing or they're just starting out, get involved with a local literary club or a writer's group. For the Denver area, the Rocky Mountain Fiction Writers group is a great place to start ... They are a great group and are the ones that helped me get published in the first place. I took classes from them, I networked with them. That's where I met the man I used to coauthor with. He was way more experienced than I was, and I learned a lot. It got me my foot in the door.

OCN: Thank you for taking the time out of your day to speak with us. I'll definitely try and stop by your table this weekend.

Richards: Yes, it'd be great to meet you face-to-face. Thank you!

Will you be attending Denver Pop Culture Con this weekend? Which author and/or other celebrity guests are you looking forward to meeting? Sound off in the comments below. We'll see you there, geeks and geekettes!