Our Coloradans Then: JonBenét Ramsey – An Unsolved Christmas Tragedy

Our Coloradans Then: JonBenét Ramsey – An Unsolved Christmas Tragedy

It's the case that has captivated the country for more than 20 years.

It was a crime that shocked a nation. A young girl brutally murdered, her parents the prime suspects, and a whole case full of twists and turns. It put Boulder in the public eye, making a tragic mark in Colorado's history. JonBenét would have been in her late 20s now had the horrifying crime never happened. There are still many questions about her death, and it remains an unsolved mystery to this day.

A Young Life Taken Too Soon

The Ramsey family, John, Patsy, Burke, and JonBenét, of Boulder, was enjoying success that holiday season. Patriarch John Ramsey's company had grossed more than $1 billion in revenue, six-year-old JonBenét rode her very own float in a Christmas parade, and she was on a winning streak in the pageant world. Her numerous award titles included 'Little Miss Colorado,' 'National Tiny Miss Beauty,' and 'Little Miss Christmas.' But, their good fortunes were soon to take a heart-breaking and horrifying turn.

Christmas day in 1996 was like most in the household. Presents, a bike for JonBenét, and dinner at a friend's house, all ending with an exhausted little one being put to bed. It's a scene that you will see in many homes on the holiday.

The next day was supposed to be the day the whole family set out for a Disney Cruise, but it turned into a nightmare instead. JonBenét was missing, and a three-page, handwritten ransom note claimed responsibility. The note, which was supposedly from a foreign group, demanded $118,000 (the exact amount of John Ramsey's bonus) and said it would call by the next day. 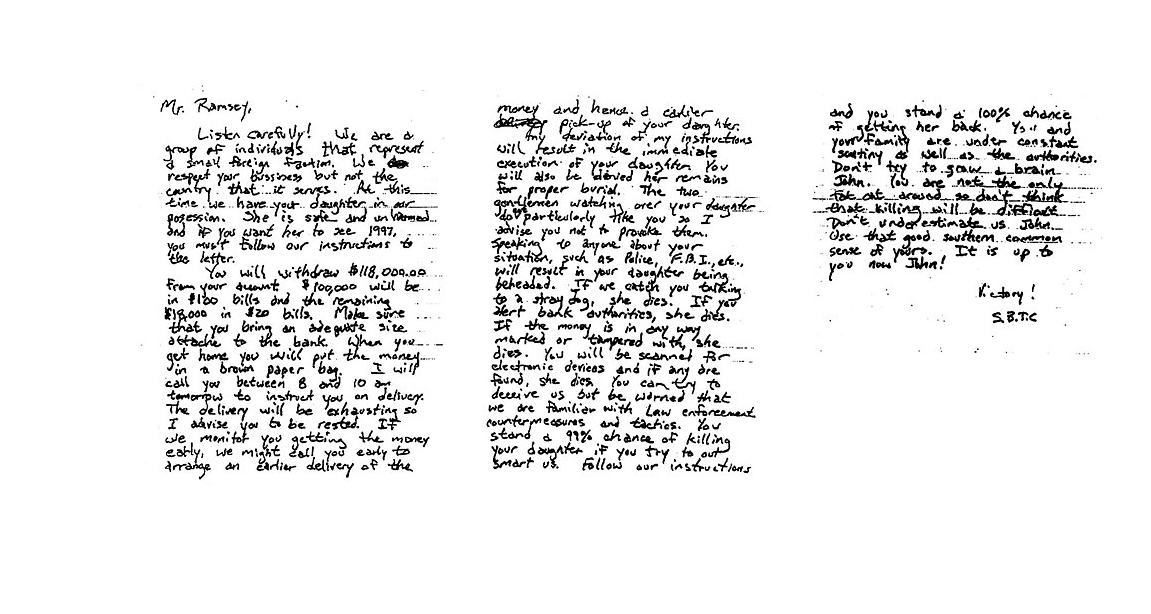 The ransom note. Courtesy of Wikipedia.

The call never came. Law enforcement had been called in, and eventually began a sweep of the home. John and a friend searched the basement and made a gruesome discovery. JonBenét was found in an old coal room for the house. Her mouth had been duct-taped shut, and she was bound and strangled with rope; a handle from one of Patsy Ramsey's paintbrushes had been used to tighten the rope around her neck. There was evidence that she had also been sexually assaulted.

What started as a kidnapping had become a murder.

There were so many questions raised in those first days of the investigation: why a ransom note if there was no kidnapping? How did paper from a notepad kept by the Ramsey's phone end up as a ransom note? Why would someone do this to a little girl?

So many people were in and out of the home the morning she went missing that a lot of the crime scene was very compromised. However, the autopsy showed that JonBenét had died due to suffocation with forcible trauma to her skull.

Initially, the focus of the investigation landed on John and Patsy Ramsey. The family took much public scorn for their daughter's participation in child pageants as videos and pictures of her in all her makeup, pouty poses, and regalia started showing up in the media. The family was said to be uncooperative, though they maintain there were many issues with the law enforcement working on the case that made it difficult. They did not help their case when they appeared on CNN before they talked to the media, which placed more scrutiny upon them.

It took two years for the Boulder district attorney to convene a grand jury. It lasted 13 months. The Ramsey's son, Burke, testified, but John and Patsy did not. In the end, it was announced by the DA that no charges would be brought in the death of JonBenét. But in one of the biggest twists in the case, Boulder Daily Camera Reporter Charlie Brennan had uncovered that the grand jury members had actually unanimously voted to charge John and Patsy Ramsey. The grand jury had voted for indictment on two counts: child abuse resulting in death and accessory after the fact to first-degree murder. It was the DA at the time who refused to acknowledge the findings and so no charges were ever filed.

The findings of the DNA analysis still remains hotly contested, but a sample taken from JonBenét's underwear yielded DNA of an unknown male who did not match anyone on the crime scene or John Ramsey. It was suspected that the DNA could be from a factory worker who made the clothing, but later tests gave reasonable doubt that was the case. This DNA was used to rule out another possible suspect, a man named John Mark Karr, an American teacher in Thailand who, in 2006, confessed to killing the little girl.

It was also the basis of a 2008 apology to the Ramsey's by the DA at the time, saying John and Patsy were exonerated of the crime.

The death of JonBenét remains an open homicide case to this day. Patsy Ramsey passed away from cancer in 2006. John remarried and moved. But that hasn't stopped people from speculating on the crime.

In 2016, the suspect spotlight swung to JonBenét's brother, Burke, this time in the court of public opinion. A CBS program, The Case of JonBenét Ramsey, featured a forensic pathologist who theorized that Burke had killed his sister on that Christmas so many years ago. The show also claimed the John covered up the crime for his son.

And while fingers will likely always be pointed by the public, the media, and those who were involved in the investigation, the sad fact remains that nothing will bring back a young girl who was cruelly taken from this world way too soon. 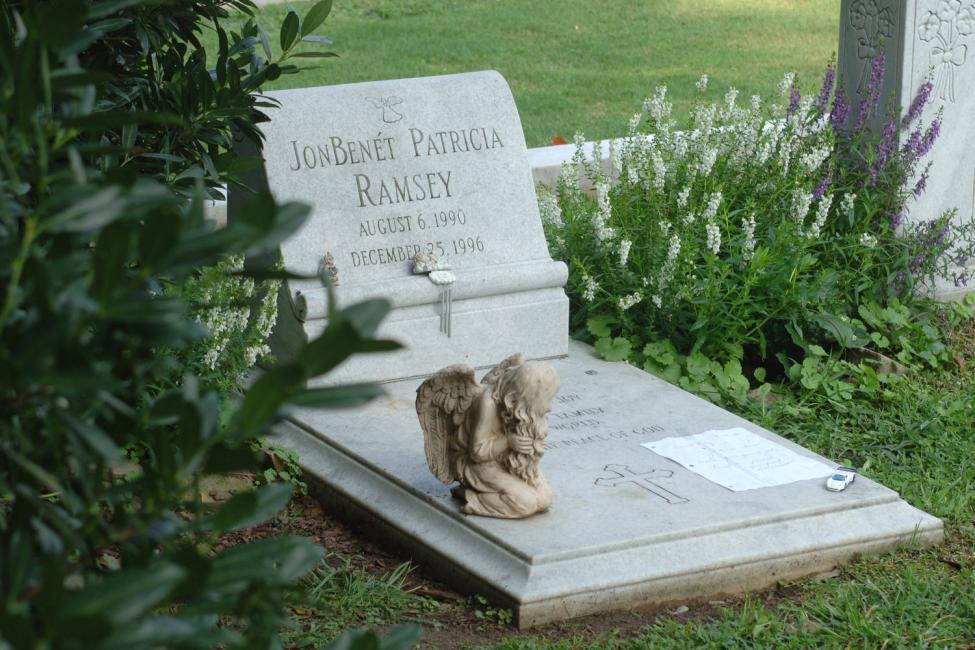 Did you live in Colorado and/or the Boulder area when the murder happened? What were your thoughts on the tragic murder? Let us know in the comments below.