The free testing center will be open by appointment or walk-in, twice a week beginning on June 17, 2020.

Governor Larry Hogan is making coronavirus testing affordable and easy with a new testing site at the Baltimore Convention Center in downtown Baltimore. The site is being operated by the Maryland Department of Public Health, and testing will be offered at no cost to anyone who needs it. Patients do not have to be symptomatic or have a doctor's order to get tested. Testing will be available this week on Wednesday, June 17, and Friday, June 19.

The governor is urging anyone returning to work and people that have attended large gatherings, such as protests, to take advantage of the free testing.

“We are strongly encouraging anyone who wants to be tested for COVID-19, and anyone who has been in any large gathering, or who may have been exposed—especially those who are in or around vulnerable populations—to get tested,” Hogan said. “As more people are returning to the workplace, and as more people are beginning to interact with larger numbers of people, testing will become more critical than ever.” 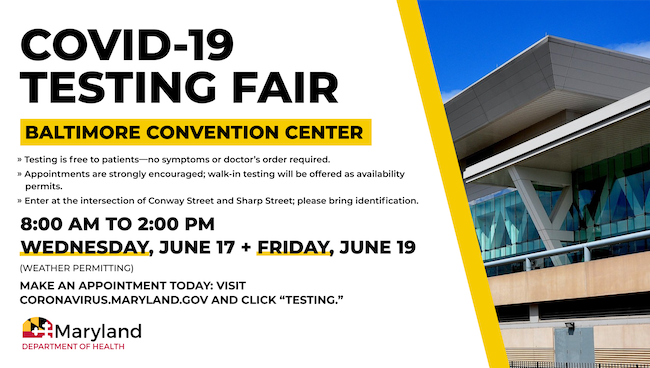 The testing center will be open on Wednesdays and Fridays from 8 a.m. to 2 p.m. and patients can make an appointment by visiting the Maryland coronavirus website. Walk-ins may be accepted depending on volume at the center. After patients complete the test, they can get results two to five days later by phone, by text message, or via an online patient portal. There is no copay or out of pocket cost for patients at this location.

Maryland now has more than 150 testing sites throughout the state. As of June 14, the state has conducted more than 500,000 tests, and the weekly average positivity rate has dropped to 6.55 percent, down 75 percent from the peak on April 17. On June 19, restrictions will be lifted allowing gyms, indoor fitness centers, malls, and casinos to reopen at 50 percent capacity.