Hurricane Dorian is expected to thrash its way into the Hampton Roads, Virginia, region by late Thursday evening into early Friday morning.

As Hurricane Dorian grows stronger, the effects of the storm are worsening. Dorian is finishing its path through the Bahamas and is moving slowly at 1 mph towards Florida with a Category 4 rating. Dorian is expected to blast through Georgia and North and South Carolina beginning Wednesday, and all three states have preemptively declared a state of emergency.

Later this week, Dorian will arrive in the Hampton Roads region of Virginia, starting late Thursday evening into early Friday morning. As of right now, it's expected to leave lasting effects: beach erosion, 40 mph winds, and high surf with wind gusts up to 50 mph, coastal flooding, and up to 5 inches of rain. 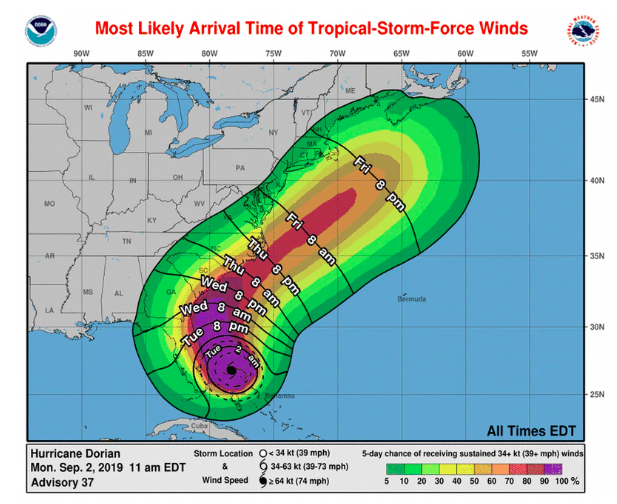 Peninsula Locality officials monitored the storm's progress over the weekend and have the determined that residents should begin to make hurricane preparedness plans this week as we gear up for what's to come. You are urged to stock up on supplies such as candles, flashlights, canned food, water, and plenty of bread—you should expect to devour quite a few PB&J's and chips during the possible power outage!

A state of emergency has not yet been declared for the seven cities but you should begin making evacuation plans as the chances of "direct impact" damages continue to increase.

In order to keep updated with the status of Dorian's threat to Hampton Roads, you can keep track of the storm on the Norfolk alert system!

If you live in coastal Virginia, first you learn your evacuation zone at https://t.co/3iRdZdRKP9 and then you need to put a plan in place for where you and your family would go and what route you would take. Read the complete hurricane evacuation guide at https://t.co/KZHUDLDlIQ pic.twitter.com/vv4UsQdhF1

This is the current status of Dorian's projected path, and changes can take place at any time. Please check back later for any updates.

Have you prepared for Dorian's impacts yet? Did you expect it to come to Hampton Roads? Do you think the effects will be less than what is expected or more? Tell us your thoughts in the comments!