National Landing Reimagines US Route 1 With 'People Before Cars' Initiative

National Landing Reimagines US Route 1 With 'People Before Cars' Initiative

It's no secret that US Route 1 in Crystal City, Virginia, is a nightmare to navigate—VDOT reports that over half of Arlington residents feel unsafe on the highway due to its stressful, high-speed environment. But National Landing is addressing these problems in a new initiative that sets to prioritize safety and the well-being of the community.

On Tuesday, the downtown center's Business Improvement District (BID) launched "People Before Cars," an enterprise to create a people-friendly sprawl for cyclists and pedestrians. The group's proposed changes would fall between 15th Street South and the border of Alexandria in efforts to accommodate over 26,000 residents who live and work in the region. Artistic renderings of the plans show expanded sidewalks, reduced wait times at pedestrian crosswalks, safer bike lanes, and scaled-back car lanes, all of which are complemented by scenic landscaping and public artwork.

According to National Landing BID President and Executive Director Tracy Sayegh Gabriel, the changes reflect the shifting demographics of the area and their priorities as a result. Around one-fourth of households living downtown do not own cars, with many opting for biking or public transportation to get around. 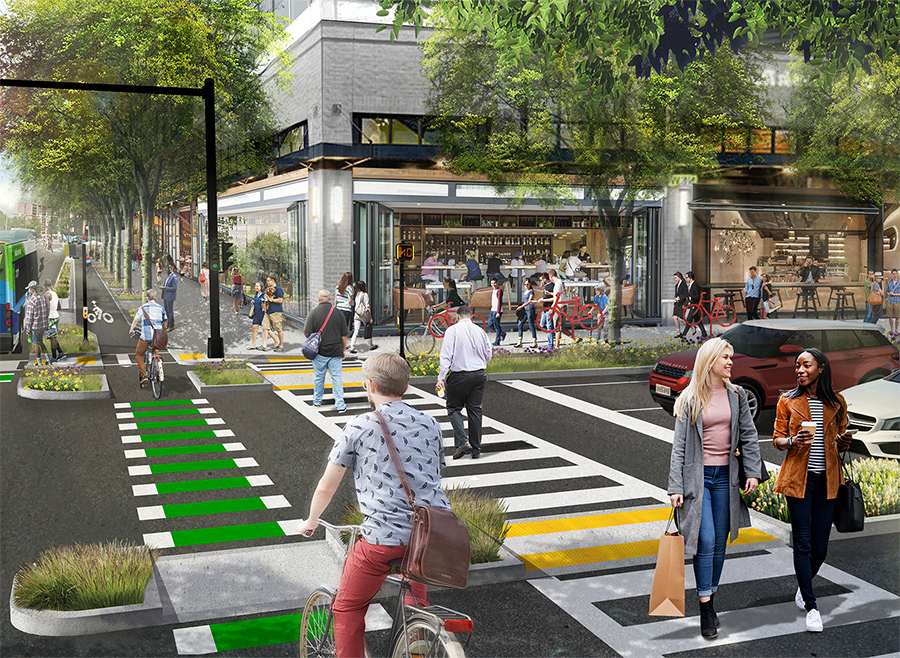 “Exciting developments underway in National Landing are delivering a new generation of offices, homes and parks with people-centric designs that value safety and accessibility. It’s imperative that our infrastructure follows this forward-looking trend,” Gabriel said in a press release. “As our area experiences an influx of new residents and workers in the coming years–a population that is anticipated to favor walking and biking as means of transit over cars–we must do all we can to ensure that Route 1 can safely and effectively serve the needs of our growing community."

Additionally, the group's redesign aims run two-fold. Along with offering desirable living quarters to residents, they also cover economic interests through attracting new businesses and people who would work there. National Landing is comprised of three neighborhoods in Northern Virginia: Potomac Yard, Pentagon City, and Crystal City, which is the residence of the incoming Amazon HQ2 complex and a significant factor in revamping the area.

You can learn more about the proposal here.

National Landing residents, what do you think about the "People Before Cars" initiative? How will it impact your day-to-day life? Share your thoughts in the comments.