Two males and one female black-footed ferret were born in Virginia in May.

The Smithsonian Conservation Biology Institute has welcomed a trio of black-footed ferrets and is asking the public to help name them. The babies, called “kits” were born at the conservation institute on May 19, 2021. The births mark a significant milestone for the breed, the only ferrets native to North America. Now through July 7-25, you can visit the Smithsonian platforms and choose from three different names for each ferret. The winning names will be announced on Tuesday, July 27.

Native to the western plains, the last colony of black-footed ferrets was found in Wyoming in 1981. Almost 40 years later, more than 1,000 black-footed ferrets have been born at the institute, about 10 percent through artificial insemination. The institute has a preconditioning program where some ferrets can be taught how to survive in the wild. 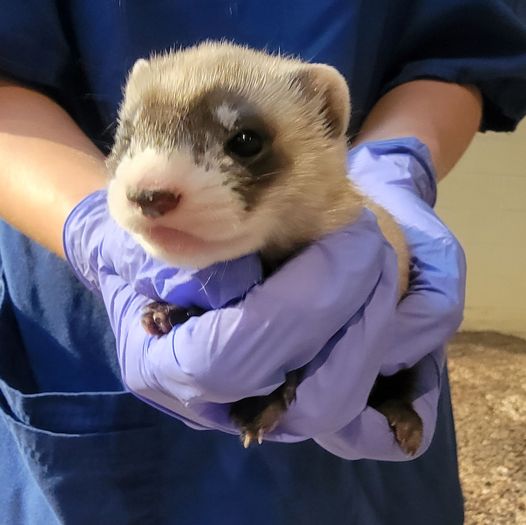 The most recently born kits, one female and two males will be named three ways, the website, mobile game, and by National Zoo members. The name choices reflect the natural habitat of the animals.

The name for the female will take place on the website:

Americana: a term used in many prairie animals' names

Aster: a purple flower found on the prairie

The name for the first male will take place on the zoo’s mobile game app, Zoo Guardians:

Aspen: a plant found on the American prairie

Cottonwood: another native plant found on the prairie

The name for the other male will be chosen by the Smithsonian’s National Zoo members:

Albus: for an endangered fish, the pallid sturgeon.

Cupido: from the species name of the prairie chicken, Tympanuchus cupido.

Swifty: for the swift fox

The kits' new names will be announced on the National Zoo’s website and social media channels. You can watch the baby ferrets live in their “den” and play enclosure on the zoo website.

Do you have a favorite name that didn't make the voting ballot? Share it in the comments.