Running seven races on seven continents in seven days sounds like #fitnessgoals. But is it healthy?

I had personally never heard of the event until Ashoka Arora, a 58-year-old from Virginia Beach, announced his intent to run. Having run ultras (marathons consisting of 100 miles) before, Arora feels ready for the World Marathon Challenge, which has been a goal of his ever since he started running. He expects the race to be more of a mental challenge, rather than a physical one, but he says, “It’s going to be a little challenging in the heat. The cold should not be a problem." 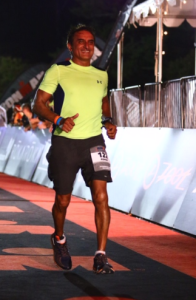 So I guess Arora will luck out during the first marathon—you can't get much colder than the Arctic! But it heats up from there: Cape Town, Australia, Dubai, Madrid, Brazil, and Miami. I wish him well, but let's discuss what happens to your body during a challenge like this ...

Like every sport, distance running is laden with its own problems. Many intense runners fall victim to overtraining, undereating, blood doping, you name it. Running releases endorphins, racing can make you feel proud and strong, and sometimes you get caught up in chasing those highs. Or maybe you just really like running and you really like putting those miles in. You've done a half and a whole marathon, so ultras and Ironmans seem like the next step.

Studies show that ultrarunners have a tendency to suffer from more injury and more asthma. But the races seem to be more problematic than the training involved. Why? Well, you're limited in how you can refuel your body as your sweating during these runs. When you're running 50+ miles, you have to refuel while on the go. Without enough salt (that's what you're losing in addition to water when you sweat), you're at risk for cramps and escalated dehydration.

But no matter your distance, no matter your intensity, recovery is a vital step when you're on the running road. Physical activity causes your muscles to tear microscopically. When you give your body a chance to rest, it works on repairing those tears with thicker, stronger muscle. That's how you build up muscles! The tearing is just as important as the repairing. Your bones work in a similar way—a little stress will make them tougher when paired with recovery; too much stress and/or no recovery, you'll get an actual break.

Chances are, if you are an ultra distance runner you are probably training about 15 hours or 150km a week. That's a lot of physical activity, which can ultimately put you at risk for overtraining syndrome (OTS). OTS can cause a prolonged decline in athletic performance and overall mood. And it won't resolve with your typical rest period either. You may be out of commission for a long time—like years.

So How Do You Train for Something Like the World Marathon Challenge?

The answer is slowly. Increase your mileage by no more than 10 percent each week, take a break every fourth week (like actually rest), don't follow one hard workout immediately with another, and listen to your body. Honestly, I'm not really sure that seven races on seven continents in seven days is such a great idea. That's a full week of hard workouts, one following right after the other. Not to mention, travel takes a major toll on your body as well. I just hope the runners, Arora included, trained well, stay smart, and rest, rest, rest once it's all over.

Are you an ultra runner? What are your tips on healthy training and avoiding OTS? Share in the comments!