Popeyes Has Sold Out of the Infamous Chicken Sandwich

Popeyes Has Sold Out of the Infamous Chicken Sandwich

It's not just your imagination; Popeyes franchises all over the country have sold out of their new chicken sandwich!

The Great #ChickenSandwichWar of 2019 will go down in infamy as the time when Twitter and the love of white-meat chicken pitted three of fast food's icons against one another. Check out this tweet from Popeyes, seemingly admitting defeat:

Y’all. We love that you love The Sandwich. Unfortunately we’re sold out (for now). pic.twitter.com/Askp7aH5Rr

In case you've been living under a rock, the new sandwich came out just two weeks ago. According to the Popeyes website, it features "crisp barrel-cured pickles" and a "buttery Brioche bun." Its debut was heralded with much fanfare and cheeky side-eye tweets by its competitors.

Bun + Chicken + Pickles = all the ❤️ for the original. pic.twitter.com/qBAIIxZx5v

Not one to sit on the sidelines, sassy Wendy's jumped into the fray.

Y’all out here fighting about which of these fools has the second best chicken sandwich. pic.twitter.com/4v9RJFgy0T

Back and forth they went, quibbling about whose sandwiches are better, which can be purchased on Sundays, and so on. Everyone and their mothers did a side-by-side comparison of the different sandwiches. Here's one take, by KevOnStage Studios:

It seemed like Popeyes came out on top with its bigger chicken cutlet, better bread, and overall value. Our own OCN team did a video on what makes the sandwich so great.

This is where things get a little hairy. All around town, people started seeing hastily hand-lettered signs that the sandwiches were sold out. Local celebrities were stopped, not for autographs, but for offers to buy their newly-purchased meals.

Fried Chicken Frenzy!
A man offered $10 for my @PopeyesChicken sandwich. He didn’t want to wait in line. I waited 34 min to buy one for my son. Three customers said they drove to a few locations & they were sold out. I told the man “no thanks.” #popeyeschickensandwich #Popeyes pic.twitter.com/t3tnML2RAi

Over these last few days, the only announcements from Popeyes happened at a grassroots level, store by store declaring that they were out (out of what—the chicken, the buns?). Many sad faces were incorporated to help soften the blow amid a flurry of impromptu, scotch-taped signage. All four stores in my own town were out by this weekend, according to OCN readers. 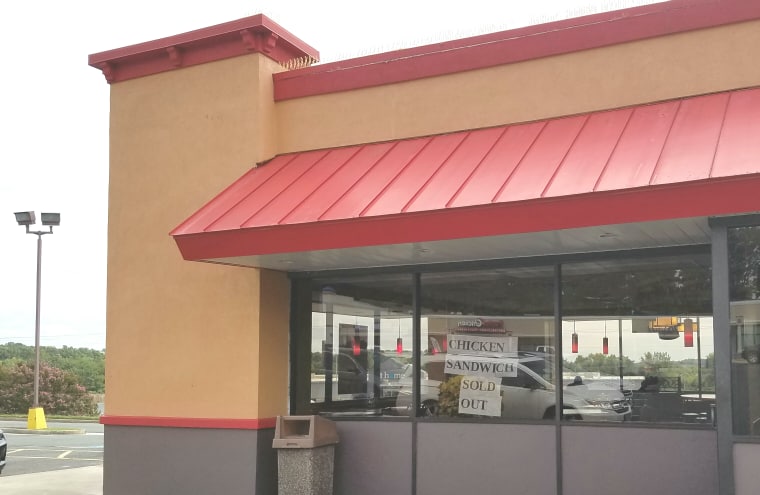 Fast-forward to yesterday when the Louisiana-based chain had to admit that they had severely underestimated the demand for this new product. The description on their website now features a "Be Back Soon" banner, like anyone is willing to wait an undetermined period of time for a chicken sandwich, no matter how good it is. They urge patrons to download their app so they can be notified when the sandwich is back, as if they were hawking Hamilton tickets instead of fried food.

So what do you think? Is the winner the one with the best chicken sandwich, or the one who can actually meet the needs of the masses?

Have you been caught up in the #chickensandwichwar hype? Sound off in the comments!