Let's be honest, the Electoral College can be a little confusing.

If you missed Part 1, an explanation of the timeline between Election Day and Inauguration Day, find it here.

On the one hand, the Electoral College is pretty easy to explain at face value, and we all know that it exists; but what does it mean exactly and how did we even get here?

We talk about voting and how every vote counts, but then we discover that it's not our votes per se that are being counted—we're telling somebody else how to vote on our behalf. And they mostly do, and states try to ensure that remains the case—except when it doesn't. And shouldn't the popular vote and the electoral vote match? Sometimes they do! Except for when they don't.

See? A little confusing. So, let's back up and talk about how the Electoral College got started in the first place.

Something to keep in mind when talking about the Electoral College is that it's old, like "Founding Fathers" old. The whole creation of our democracy wasn't an experiment exactly, but there was very much a feeling of “I think that'll work,” and “Yeah, sounds good!” as people like Alexander Hamilton and James Madison wrote letters and essays back and forth to each other and the public at large.

I'm not saying our democracy was created on a whim or anything, but it was a new and untested format. Like other issues that crop up in modern times, the Founding Fathers had no way of knowing how politics and society would evolve in the years to come. The Electoral College has been part of the Constitution since the beginning and has had to change a few times along the way.

So, it all started with the Constitutional Convention of 1787. It wasn't called that then because they didn't know for sure that they'd be creating the Constitution, but you get the idea. This convention didn't happen in a day or two, by the way. It was about four months of debates and compromises—part of which was nailing down what would become known (much later) as the Electoral College. It was initially suggested that Congress choose the president, but many felt that would interfere with the separation of powers. James Wilson suggested the concept of electors—individuals that could make an unbiased, informed decision on who the next president should be. The people were to literally vote for someone to vote for them. Of course, initially, the electors were chosen by the state legislature—so the people were voting for somebody to vote for somebody to vote. But that changed over the years. By 1824, most states' electorates were chosen by popular vote; by 1832, all but South Carolina were chosen this way; and by 1880, all states were operating the same way.

The idea of having electorates as representatives for the public was brought to the table to prevent abuse of power from those in charge, passing that power along to their buddies, influence from another country, and to keep the interest of the people in the forefront. The people who, apparently, couldn't be trusted to elect a president but could be counted on to pick a guy who would.

Not to say everybody agreed with this. Although I can almost hear Alexander Hamilton rapping about Federalist Paper #68 in my head, some delegates (including Wilson and Madison) felt like they should go with a popular vote by the public. However, even James Madison recognized that could be a messy situation, especially taking into account the division between North and South that was already apparent on the issue of slavery. So using electors was a compromise that would, in a quote from Madison, “be liable to the fewest objections."

Oh, and there was no vice president on the ticket!

Originally the electors voted for two people that could serve as president. Although they had running mates, candidates could not run together on the same ticket with a predetermined strategy of who would be who—they both were running for president of the United States. It was "go big or go home" ... or rather, "go big or go get the less powerful but still pretty prestigious job." Whoever got the most votes won, and 2nd place was awarded the role of vice president. This went on for a relatively short amount of time because it didn't really take long for political parties to form and make the whole thing more complicated.

The third presidential election of 1796 was a hot mess. It was the first to prominently be influenced by political parties, the first contested election, and it ended up seating political rivals as president and vice president. It was an extremely close race, but John Adams (Federalist) ended up being our second president and Thomas Jefferson (Democratic-Republican) took veep.

Thank about that for a second, though. It would really be like if, in the 2000 election, George W. Bush still won but was forced to take on Al Gore as his vice president.

Then in 1800, it was a hot mess! Again! It was extremely close, however, this time Jefferson was able to turn the tables on Adams but now it would take some time to figure out who the actual president was. Jefferson and Aaron Burr had tied! Obviously, this led to Jefferson becoming our third U.S. president and Burr serving as vice president, but it took a while for the dust to settle. I'm also not sure when they had time to perform a musical during all of this.

So that led to the 12th Amendment, changing how the Electoral College voted. Now they would cast one vote for president and one vote for vice president. There could no longer be a tie, but in case there was no clear winner, the decision was still left to the House. However, the number of candidates for them to choose from was lowered from five to three. The 12th Amendment also established that the Senate would be the one deciding on the vice president in case no one held the electoral majority. 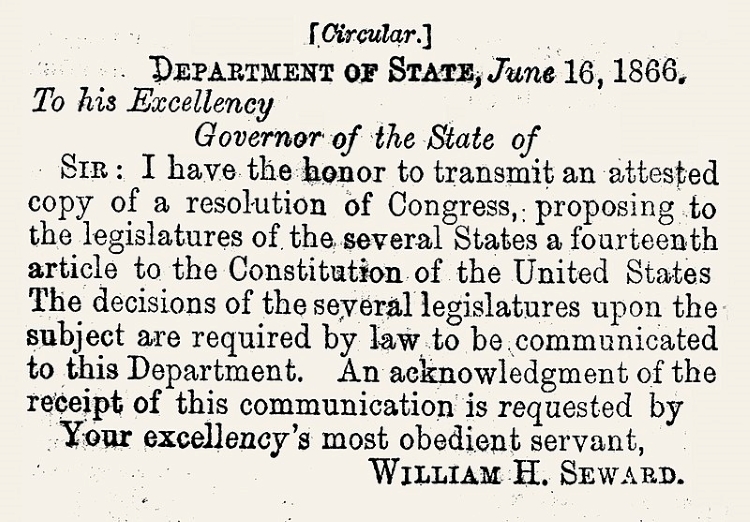 The next big change was in 1868 with the 14th Amendment. This amendment has a lot going on and is still quite relevant today but, focusing on the Electoral College, what you need to know is this: freed slaves after the Civil War would be counted for determining a state's congressional representation. Before the 14th Amendment, there was a three-fifths rule regarding how to count slaves towards a state's total population. Basically, three out of five slaves counted and influenced the number of seats in the House and taxes.

Anyway, the 14th Amendment went to change all that with Radical Republicans of the time pushing for former slaves to have the right to vote. Obviously, that didn't happen for another two years with the 15th Amendment, but it was eventually decided that all freed slaves would count towards a state's population. Not only that, but a state would essentially be punished if they did not allow eligible people to vote—their representation in Congress would reflect that. And, by the way, I'm not making up that Radical Republican bit; that's a thing.

Still reeling from the hot mess that was the 1796 election, Congress passed the Electoral Count Act in 1887. All of the weird wording and time frames originated with this. The idea was to commit to a standard that could be repeated every voting cycle even if it lent itself to cryptic and hard-to-understand verbiage. Instead of "the first Tuesday of the month," Election Day was designated “the Tuesday next after the first Monday in the month of November."  Maybe they just wanted some extra flair.

Despite being criticized almost immediately and to this day, the Electoral Count Act established almost everything we do with the election and electoral votes to this day. Things like: who would resolve disputes regarding the electoral votes? (the state), rules for counting of the votes, the Certificates of the Vote and Ascertainment, it's a lot.

The 20th Amendment moved up the terms of office for the president, vice president, and Congress and stated what to do if a president-elect passes away between the election and Inauguration Day. The 23rd Amendment added the District of Columbia into the mix, giving them the same amount of electoral votes as a small populated state. And with those three things, the first one starting back in 1887, the Electoral College as we know it was formed.

But wait! Is there any alternative to the Electoral College? And what's this I hear about "faithless" voting? Well, we'll have to dig into those in a whole other article—but don't worry! All of that is just as simple as everything else we've covered so far!

Did you get all that? How does your state handle the Electoral College process? Let us know in the comments!