KitKat® Will Soon Be Available in a Vegan Version

KitKat® Will Soon Be Available in a Vegan Version

The vegan chocolate bar will be released in test markets overseas first.

If you loved KitKat® bars before becoming a vegan, you'll soon be able to enjoy them again. Nestlé, the company that owns KitKat has announced it's working on producing a plant-based version of the popular wafer candy bar: Nestlé's first vegan KitKat. Invented in the 1930s in the U.K. and later acquired by Nestlé, KitKat bars are produced by Hershey in the U.S. under a special licensing agreement. Initially, the new candy bar won’t be available in the U.S.

The new version will be called KitKat V® and it will be both vegan and dairy-free. Details on what combination of vegan ingredients will be used have not been released. Nestlē decided to make the KitKat into a vegan candy after receiving requests for a vegan version from fans.

"One of the most common requests we see on social media is for a vegan KitKat, so we're delighted to be able to make that wish come true,” said Alexander von Maillot, Head of Confectionery at Nestlé. “I can't wait for people to be able to try this amazingly tasty new KitKat. This is a product for everyone who wants a little more plant-based in their life!” 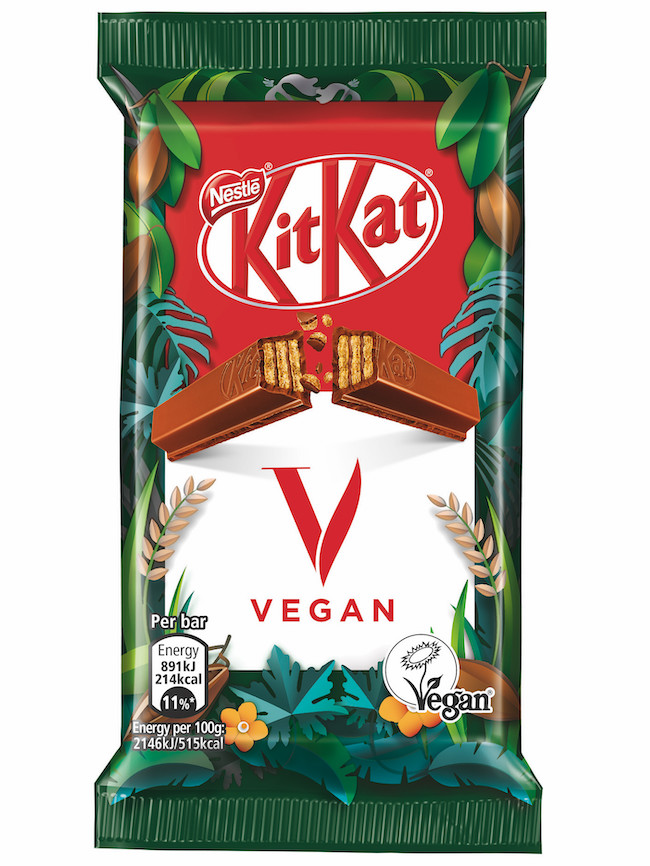 KitKat V will be released as a test product in KitKat Chocolatory and selected global retailers sometime this year. The KitKat Chocolatory is a specialty store located in Melbourne, Australia that allows visitors to design their own custom flavored KitKat. KitKat released two special edition flavors in the U.S. last year: lemon crisp and raspberry creme. Over the year, the company has produced nearly 200 KitKat flavors, many of them released only in Japan with unique flavors such as sake, green tea, soy sauce, ginger ale, and a whiskey version made from chocolate aged in whiskey barrels for six months.

Which is your favorite KitKat flavor? Let us know in the comments if you're game to try the vegan version when it's available.