Yes, Those Cauliflower PEEPS You've Been Seeing Are Real

Yes, Those Cauliflower PEEPS You've Been Seeing Are Real

If you’ve been on Instagram in the past week you have probably seen posts from food bloggers showcasing packages of Green Giant Cauliflower PEEPS®. Given that April Fools' Day is on Thursday, April 1, one might think it’s a holiday prank. In actuality, the vegetable flavored PEEPS® are real and will be available for a limited time starting on April 1. THE PEEPS® will be more marshmallow than cauliflower, with just a slight cauliflower flavor.

For the last few years, cauliflower has been a popular replacement for carb-rich foods like rice and flour. Green Giant has developed cauliflower pizza crusts, vegetable fries, and breadsticks available in grocery store freezers. The vegetable’s mild flavor and strong texture make it the perfect base ingredient for higher-calorie items.

"Whoever said you can't combine vegetables and sweets has not tasted our latest innovation," said Kristen Thompson, Brand Director, Green Giant. "Consumers have raved about Green Giant Veggie Swap-Ins products for breakfast, lunch, and dinner, so we thought we should tackle sweets, too. Working alongside PEEPS® felt like a natural partnership, and we think consumers will be clamoring for Green Giant Cauliflower-Flavored Giant PEEPS® Marshmallow Bunnies this Easter.” 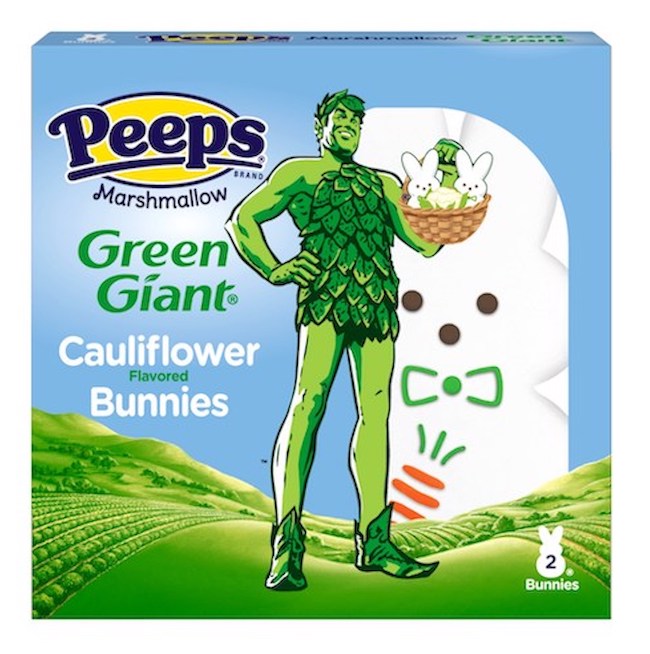 The limited-edition Green Giant Cauliflower-Flavored Giant PEEPS® Marshmallow Bunnies come in packs of two and are scheduled to be available in stores on Thursday, April 1. Just Born, the maker of PEEPS® has also collaborated with PepsiCo on a special edition marshmallow-flavored soda. Three-packs of PEPSI X PEEPS® will be given away in conjunction with a social media campaign. Whether or not Green Giant Cauliflower-Flavored Giant PEEPS actually make it to store shelves remains to be seen. We’ll just have to wait and see what happens on April Fools’ Day.

Did you find a package of Green Giant Cauliflower-Flavored Giant PEEPS®? Tell us about it in the comments.