This is a story about how the 500-year-old La Peregrina pearl was almost turned into a chew toy.

How fitting that a pearl named La Peregrina, which translates into "wanderer", would go from being worn by Spanish queens to being discovered in a dog's mouth at the Caesar's Palace hotel in Las Vegas?

Let's start at the beginning.

When La Peregrina was first discovered in the Gulf of Panama, it was heralded as the largest, perfectly-symmetrical, pear-shaped pearl ever found. Prior to any alterations, it weighed in at 55.95 carats. In 1597, it was sold to King Philip II of Spain where it was placed in the collection of the Spanish Crown Jewels.

Spanish queens went absolutely ape for this pearl and it has been a feature in many royal portraits. 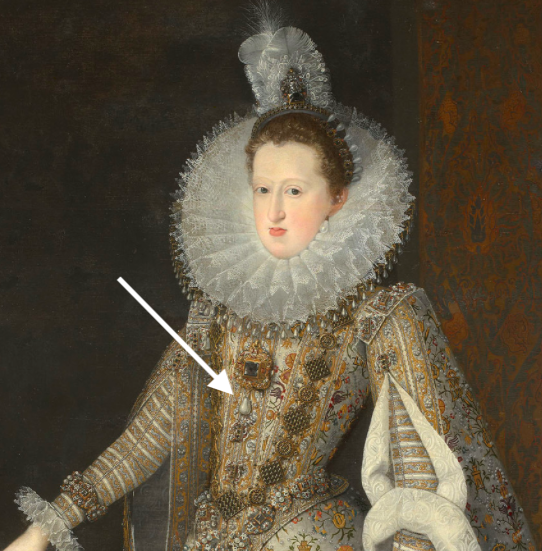 Fast forward to 1808 when Joseph Bonaparte (older brother of Napoleon) became king of Spain. He only reigned for five years and left the country after losing the Battle of Vitoria. Part of his move-out included taking the beautiful pearl with him.

Joseph sold the pearl to the Duke of Abercorn as a gift for his wife and, true to its name, the pearl fell out of its setting and went missing twice. Thankfully, it was recovered each time, but I think we can all agree that the Duchess of Abercorn was close to cardiac arrest each occasion.

In 1969, the pearl was then sold at auction for $37,000, which roughly equates to $270,000 in today's dollars. The buyer, actor Richard Burton, purchased the pearl as a Valentine's Day gift for his wife, Elizabeth Taylor. If there's one thing about Richard's and Elizabeth's relationship you should know about, it's that Mr. Burton kept his lady jeweled.

While on a trip to Las Vegas, Elizabeth had been wearing the pearl and noticed that La Peregrina—once again—did what it was good at, and went missing. Elizabeth scoured their hotel suite high and low and noticed her dog was chewing on something.

Elizabeth slowly opened the dog's mouth and there La Peregrina was, completely intact and scratch-free. Elizabeth would later go on to have Cartier re-design the necklace into a stunning display of pearls, diamonds, and rubies with La Peregrina as the drop. The necklace was later lent to the Smithsonian for display and then in 2011, it was sold for $11 million at Christie's in New York.

I hope whoever now owns La Peregrina is keeping tabs on it—and doesn't own a dog.

Kentucky vs. Georgia football: 3 things to know before picking the game