The twists just keep on coming ...

After news recently broke that Big Cat Rescue's Carole Baskin gained ownership of Joe Exotic's former zoo in Oklahoma, another shocking twist in the never-ending Tiger King saga has been added. A Florida sheriff declared that the will of Baskin's missing husband, Don Lewis, was forged.

"They called in some experts to say that the will was a forgery and I had already told them that two months ago," Hillsborough County Sheriff Chad Chronister said Tuesday. "They had two experts deem it 100% a forgery." 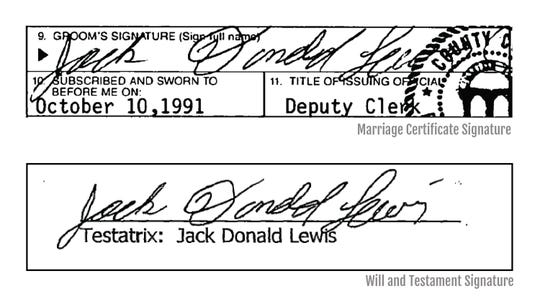 "In conducting the examination of the durable family power of attorney and the will, both of which were created on Nov. 21 in 1996, I was struck by the uncanny similarity between each set of signatures," Vastrick added. "It was nearly exact replication to the extent that I was very confidently able to opine that what I was dealing with—at least with Mr. Lewis's signature—that these signatures were traced."

Lewis went missing from Tampa in August of 1997. He was officially declared dead in 2002.

Netflix's Tiger King raised many suspicions about the disappearance of Lewis, with viewers questioning Baskin's involvement and prompting new interest in the case. She has repeatedly denied those claims.

Baskin wrote in a statement following the release of Tiger King,

"When he disappeared, I did everything I could to assist the police. I encouraged them to check out the rumors from Costa Rica, and separately I hired a private investigator."

Baskin said that Lewis was talking about getting a divorce, but she said he wasn't serious. "Don was not easy to live with and like most couples, we had our moments. But I never threatened him and I certainly had nothing to do with his disappearance," she wrote.

The Clarion Ledger reported that the notary listed on the will and power of attorney "remembers nothing about authenticating them."

"I don’t remember a will at all," said notary Sandra Wittkopp, who worked for Lewis and Baskin for six years. "I was the housekeeper."

In a sworn statement purportedly signed by Wittkopp in 1997, she had been quoted saying that she'd witnessed both the will and power of attorney document being signed by Lewis. The Clarion Ledger, however, says that it "may have been impossible for Wittkopp to have the notary stamp in time to sign the will and power of attorney on Nov. 21, 1996." Her application to be renewed as a notary came in Nov. 16, 1996.

According to Anne McQueen, who was the executive assistant to Lewis and a notary, it takes roughly two weeks for the stamp to be produced and delivered.

And that's just the tip of the iceberg, as Wittkopp's application for a new notary stamp was mailed to Baskin's address, 12802 East St. in Tampa, where Big Cat Rescue is located today. It was not mailed to Wittkopp herself.

McQueen also said that the only will and power of attorney she had knowledge of was under her desk, which Lewis had signed and given to her for safekeeping. Lewis had made McQueen the executor for his will, power of attorney, and life insurance; however, that wasn't the case on the new will that came to be after his disappearance. Instead, Baskin was named the executor.

Susan Aronoff, another purported signer of this new will, reportedly testified she was there for the signing, when, in reality, she actually wasn't.

According to the Clarion Ledger, Aronoff wrote a series of emails that have been shared with Mississippi Center for Investigative Reporting (MCIR), which state that when Lewis "disappeared and the kids were contesting the will, I got a phone call from Carole to go to court because it seems that I was one of the supposed witnesses on the will! ... The problem with the will is that Carole had me backed against a wall at the time and from fear of her then I signed a statement, swearing it to be my signature, even though it wasn’t. I could go to jail for that I’m told."

Just two days after Lewis' disappearance, Baskin had filled out all of the forms for Aronoff in order to set up Preservation Station (now Zooville USA), a nonprofit animal sanctuary, and paid the $700 registration fee. Aronoff said she'd received a letter of recommendation from Lewis, with what was assumed to be his signature, for her Class I certification in order to own big cats at Preservation Station. The letter, according to Aronoff, was "Carole's version of his signature" and that "if I had ever seen his, I would know that what I had wasn't it."

The 5-year statute of limitations on forgery has expired, so criminal charges could not be filed.

This new will left all of Lewis' wealth to Baskin, including his $10 million estate, and cut off his own family from inheriting anything.

Sheriff Chronister did not confirm nor deny if Baskin was being considered as a suspect.

"Investigators have some great leads," he said. "They're working through them. I hope something pans out."

What do you think about this latest development in the Tiger King saga? Share your thoughts with us in the comments below.

*This is a developing story and will be updated accordingly.

Arizona couple who fought with cops after mask request sentenced

Phoenix family stranded in Kabul back in Arizona after help from resettlement workers, U.S. congressman