The Run-Around: Test Out Some Running Shoes at the 'Game of Foams' Event

The Run-Around: Test Out Some Running Shoes at the 'Game of Foams' Event

Six running shoe companies will be participating in the August 15 event.

Charm City Running is just really on-point with their events. I've talked about them before: they host regular free group runs, they've set up women's self-defense classes, they offer training Q&As at their stores, as well as loads of other fitness-related events. But their Thursday, August 15, fitness group event has really caught my attention this week.

Introducing: Game of Foams. And nobody's got to die. You don't even have to pay!

Oh, and look at this CUTE little logo they thought up for it: 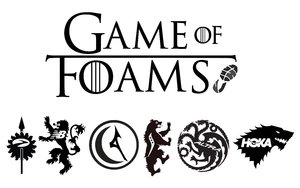 Not only does this incorporate one of the hottest things in pop culture right now, but it also showcases the six running companies that will be participating in the event: Altra, Brooks, HOKA ONE ONE, Mizuno, New Balance, and Saucony.

So here's how it works. At 6:30 p.m., on Thursday, August 15, you can show up to Charm City Annapolis and sign up to do a test run of a pair of shoes from any of these six companies. You'll get your shoes and do a one-mile loop around the Annapolis Towne Center. You don't even have to run the mile! You can walk, run, or do some combination; the point is that you get out, get some exercise, and try the shoes. Once you get back, you can trade in those shoes for another pair from a different company and do another loop. If you test shoes from each of the six companies, you'll be automatically entered into a prize drawing! (Side note: it's called the six-pack challenge ... SO CUTE.)

After all the running, you get to have drinks and food in the store. Listen for your name because there'll be lots of raffle prizes from the six participating companies! Be sure to register for this event. It's free, but if you register, they'll know to expect you. And that means PLENTY of snacks (and beer—it's not called Game of Foams for nothing)!

Finding the right running shoes for you is key to keeping comfy on your long runs, sticking with your workout plan, and preventing injury. This is a great, free, no-pressure way to try a bunch of different shoes. Not all running shoes are created equal. Lots of companies are focusing on making the lightest shoe possible. Hoka One One specializes in lots of cushioning. Altra tries to innovatively accommodate foot shape (according to their website, the female foot is inherently different than the male foot, but I'll leave that up to their shoe experts to explain).

I'm personally hoping Brooks brings out their ice cream-inspired line of running shoes to try. You never know what kind of shoe you might fall in love with. This is basically speed-dating for running shoes, and you can count me in!

*Note: This may be called a pub run, but high school runners have specifically been invited, too. What they wear on their feet while they workout matters just as much as us old folks!