Adventures in Maryland: The National Aquarium

Adventures in Maryland: The National Aquarium

The National Aquarium in Baltimore opened in 1981 and is the sole remaining national aquarium in the United States. Located in the Inner Harbor, the aquarium has over 250,000 square feet of space, featuring animals from the sea, air, and land. The multi-level aquarium has a variety of exhibits including ones that focus on coral reef, sharks, indoor rainforest, Australian habitat, and a 4-D theater. A living seashore exhibit allows visitors to interact and touch 20 species of sea life.

The aquarium has more than 2.4 million gallons of aquarium space, filled with hundreds of species of fish, reptiles, amphibians, and mammals. One of the most popular exhibits is Shark Alley, a circular aquarium where visitors can view the larger sharks, including nurse sharks, sand tiger sharks, and the large-tooth sawfish shark. The Blacktip Reef is one of the largest exhibits in the aquarium. It has a floor-to-ceiling viewing platform where visitors can see blacktop sharks, sea turtles, rays, and a variety of fish. Another can’t-miss exhibit is the Jellies Invasion. Special lighting highlights the movement and colors of nine jellyfish species inhabiting the tank. Visit the Dolphin Discovery and see the aquarium’s bottlenose dolphins before they leave for the ocean sanctuary in 2020. 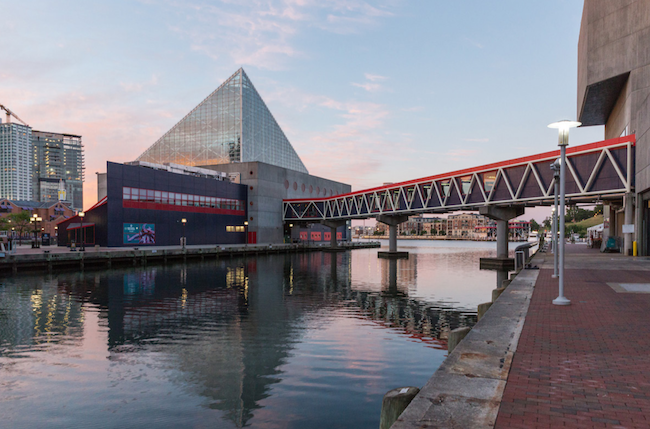 Located at the top of the aquarium, the Upland Tropical Rain Forest is home to plants, animals, and other creatures from the world’s rain forests. Scarlet Ibis, Blue Poison Dart Frog, Golden Lion Tamarin, and the Turquoise Tanager are just a few of the animals you’ll see in the aquarium’s indoor rain forest. The exhibit also has its own version of the Amazon River, home to reptiles, fish, and amphibians from the south of the equator.

Go down under and discover all the amazing creatures of Australia in the aquarium’s second tower. Australia: Wild Extremes is home to 70 species of animals living in a northern river gorge habitat. Visitors can walk down through the gorge and see venomous snakes, snapping turtles, a freshwater crocodile, and the laughing kookaburra, Australia’s very vocal national symbol.

The National Aquarium in Baltimore is located downtown at the Inner Harbor. Admission is $39.95 for adults, $29.95 for children aged 3 to 11, and $34.95 for seniors. Visitors can get a discount on parking in nearby garages with validation, and the museum has a special “Half-Price Friday Nights” promotion that gets you in for half price after 5 p.m. Tickets can be purchased online or at the aquarium.

Have you been to the National Aquarium? What was your favorite exhibit? Tell us in the comments!