5 Maryland Stores Will Be Among the Forever 21 Closures

5 Maryland Stores Will Be Among the Forever 21 Closures

Forever 21 has voluntarily filed for Chapter 11 bankruptcy protection and has chosen to close 178 of its least profitable stores, five of which are in Maryland.

Forever 21 will close 178 locations over the next few months, and five of them are in Maryland. While no exact closing date has been announced, the company expects the liquidation sales to be completed by the end of the year.

As part of their Chapter 11 bankruptcy proceedings, Forever 21 hopes that closing their least-profitable stores will set the company on a positive track for the future, allowing them to keep "a significant number" of locations open.

The company sent a letter to its customers on Sunday notifying them of the Chapter 11 bankruptcy and released a list of the 178 closing locations on Tuesday. Forever 21's revenue was $3.3 billion last year, down from $4.4 billion since 2016, and they've laid off over 10,000 employees.

“We do however expect a significant number of (our) stores will remain open and operate as usual, and we do not expect to exit any major markets in the U.S.,” the company said. 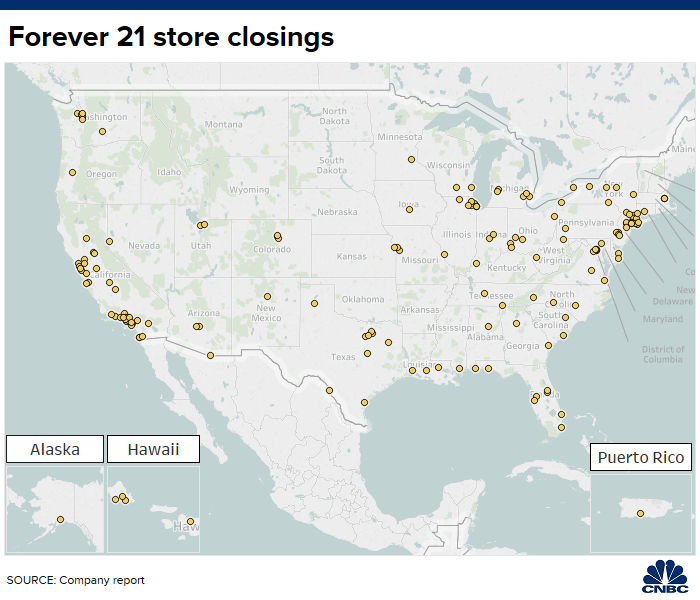 Here are the five Maryland locations that will be closing:

Forever 21 began considering bankruptcy proceedings back in August. They are just the latest in a long line of brick-and-mortar retailers struggling in an online world.

Do you shop at one of these locations regularly? Are you sad to see the store go? Do you plan to continue shopping with them online? Tell us in the comments!