Foothills and south suburbs to Palmer Divide predicted to get up to 12 inches.

'Tis the season for typical Colorado roller-coaster weather: Sunny and 60 degrees one day, cold and snow the next. And this week is no exception, as we head into mid-week with mild temperatures in the 60s turning to snow on Wednesday night into Thursday morning.

The Denver metro area and the I-25 corridor north through Fort Collins is likely looking at 1 to 4 inches in total from this fall storm. The more significant snow, likely around 4 to 8 inches (the winter storm watch information is suggesting up to 12 inches in some areas), is predicted for the south and west suburbs, foothills, and I-25 corridor south. That includes areas like Evergreen and Conifer, as well as Castle Rock (and possibly parts of the Highlands Ranch area) and south. The Palmer Divide will also see significant snow according to predictions.

As of Tuesday, several areas have been put on a Winter Weather Watch for October 23-24. The watch is for the southern Front Range foothills, including the cities of Bailey, Central City, Evergreen, Georgetown, Idaho Springs, Westcreek, Castle Rock, Elbert, Fondis, Kiowa, and Larkspur. The watch is also on for the northern Sangre de Cristo Mountains. 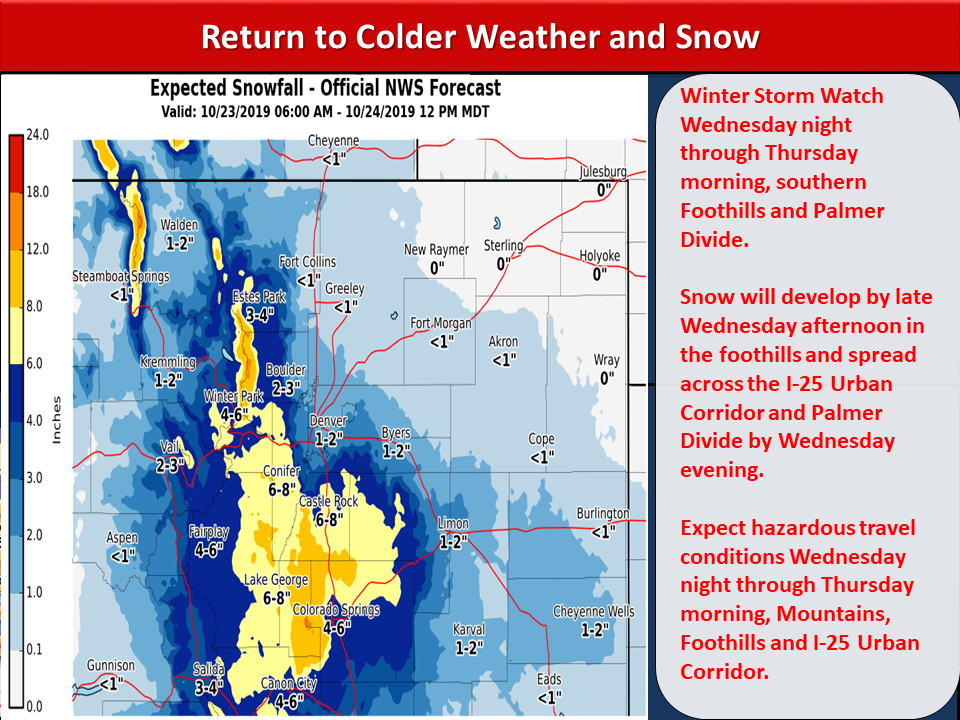 Courtesy of the National Weather Service

The mountains, of course, have been getting snow already, and this storm will dump anywhere from 4 to 12 inches on our favorite ski areas near the Continental Divide. This should be great for those that opened last week.

Temperatures will start dry and sunny on Wednesday, but thanks to that wind that's been hammering the Front Range, snow will move in by nighttime and stick around through Thursday morning. That, of course, will set up the commute on Thursday to be snowy. Depending on where you are, that could also mean some touchy driving conditions, so be careful on your commute, as we don't want a repeat of the last storm with over 300 accidents reported in the metro area, alone.

In fact, the Colorado Department of Transportation (CDOT) is asking drivers to avoid driving on the I-25 South Gap (from Castle Rock to Monument) after 8 p.m. on Wednesday night due to "dangerous driving conditions".

Snow should taper off by midday Thursday. But don't pack away warm weather clothes just yet. In true Colorado fashion, temps will be back to in the 70s on Saturday ... just in time for another cold front and possibly light snow to move in Sunday into Monday.

Stay prepared by making sure that your car is winter-ready and that you know what to do should your car become stuck.

Are you excited for more snow in Colorado, or are you still holding onto those last toasty days of fall? Sound off in the comments below, and let us know how much snow you get in this upcoming storm!